Electronic Arts (NASDAQ:EA) COO Peter Moore recently made a controversial statement regarding "freemium" games, which are free to download but designed to encourage in-game purchases.

"I don't think anybody has to like it," Moore stated in a GamesIndustry International interview. "If the river or progress is flowing and I'm trying to paddle my canoe in the opposite direction, then eventually I'm just going to lose out."

Although Moore's comparison makes sense from a business perspective, it makes absolutely no sense for the gaming industry.

Music and gaming are different experiences
Comparing CDs to games is an apple-to-oranges comparison. Lots of people buy a CD and end up only enjoying two or three songs on it. iTunes addressed that issue by allowing customers to preview and purchase the songs they want for $1.29 each.

Games, on the other hand, are purchased as complete experiences. Gamers don't buy the planets they want to visit in Mass Effect, the cities they want to explore in Fallout 3, or the dungeons they want to visit in The Legend of Zelda. If they were offered that option from the start, it would completely destroy the concept of cohesive game design. It would be like selling tickets to a movie in 15-minute increments.

The freemium model works for mobile games for a simple reason -- games like King Digital Entertainment's (NYSE:KING.DL) Candy Crush and Zynga's (NASDAQ:ZNGA) FarmVille 2 are simple experiences. They're all about getting power-ups to advance faster than friends rather than advancing a narrative. That's why the freemium model should never be applied to more complex games on consoles and PCs.

Seth Fischer, a hedge fund manager at Oasis Management, recently stated, "Just think of paying 99 cents just to get Mario to jump a little higher." That suggestion, which clearly showed that he was not a gamer, illustrates how terrible the freemium and microtransactions model would be for mainstream games -- it would turn gaming into a pay-to-win activity rather than a skill-based one.

"Pay to have Mario jump higher?" No thanks.

In the past, we've seen pay-to-win problems in MMOs like Runes of Magic and City of Heroes. We've seen "DLCs" that were actually parts of the game locked away within the original game, as seen with Take-Two's (NASDAQ: TTWO) Bioshock 2.

If EA has its way, games will be buried with even more hidden costs in the near future.

Freemium games have no price ceiling
If a customer buys a music album on iTunes, the highest possible price is the cost of the full album. With freemium games, there is no price ceiling. As wonderful as that sounds from an investing perspective, it is an unstable, top-heavy business model.

A recent report from mobile apps analytics platform Swrve revealed that only 1.5% of the surveyed users spent money on in-app purchases, spending an average of $11 on seven purchases per month. However, the top 10% of those spenders accounted for an average of 50% of a freemium apps' monthly revenue.

The top 5% of all spenders, known affectionately as "whales" in the industry, pay hundreds to thousands of dollars per month for games. According to research firm EEDAR, "whales" spend a whopping 26.5 hours per week playing these games, compared to an average of 7.2 hours for non-paying players and 9.9 hours for paying players. Apple knows all about problems that can arise from those huge in-app purchases -- it agreed to refund $32.5 million in in-app purchases to parents of children who "accidentally" made in-app purchases earlier this year. One child notably spent $2,600 on a single app, Tap Pet Hotel.

Therefore, the freemium business model is nothing like the iTunes model. Whereas iTunes helps customers save money by encouraging selective purchases, the freemium model preys on high-rolling addicts. iTunes was launched as a response to consumer demand, while the freemium model was forced upon gamers despite consumer protests.

Now's not the time, Peter
Peter Moore sounds a lot like Activision Blizzard's (NASDAQ:ATVI) Bobby Kotick, the controversial CEO who once said that he wanted to take "all the fun out of making video games."

But the key difference is that whereas Activision's behind-the-scenes decisions have been controversial, it hasn't launched as many high-profile lemons as EA. Over the past two years, EA fumbled the launch of SimCity and Battlefield 4 with game-breaking bugs, then followed up those mistakes with nearly non-existent customer service. Marketing for its mobile game Dungeon Keeper, a freemium game advertised as "free," was also recently suspended in the U.K. on the basis of false advertising. 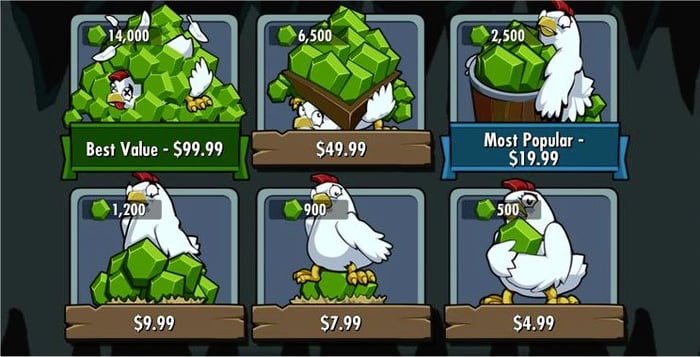 On the bright side, EA's mobile business has shown promise. EA reported 130 million monthly active users for its mobile titles at the end of fiscal 2014, which contributed to a 24% year-over-year jump in mobile and handheld revenues to $459 million. By comparison, Zynga's revenue fell 32% year-over-year to $873 million last year, while its monthly active users plunged 62% to 112 million. EA's mobile games, which include The Simpsons: Tapped Out, Tetris Blitz, and EA Sports Games, are helping it steadily overtake Zynga in the mobile market.

Therefore, Peter Moore shouldn't look a gift horse in the mouth and claim that gamers don't have to like EA's freemium strategies or make broad, pointless comparisons to the music industry. In times like these, it's better to let sales figures, instead of erroneous cross-industry comparisons, do the talking instead.