Mass Effect 4 could be one of EA’s biggest hits of 2015, but it must do these things right to make it a blockbuster.

Electronic Arts' (EA -0.97%) tentatively titled Mass Effect 4, the next chapter of its hit sci-fi RPG series, is expected to arrive in late 2015. At E3 2014, Bioware introduced the game, which will be the first chapter in a new series, with some concept art and a short video.

Based on the teaser trailer, Mass Effect 4 will take place in a different region of space than the original trilogy, allowing the developers to sidestep Mass Effect 3's controversial ending, which may or may not have wiped out the known universe.

Contrary to previous rumors that Mass Effect 4 would be radically different, the new game will be the same type of game as the first three titles -- a third-person shooter RPG with deep character interactions, moral choices, and multiple branching storylines. There are also rumors that the vehicular exploration of alien worlds, last seen in the first Mass Effect game, will return in the fourth.

Bioware's beautiful game... in EA's buttery hands
Mass Effect is one of EA and Bioware's most important franchises, with combined sales of more than 14 million units over three main games and compilations.

If EA drops the ball again with the new Mass Effect game, it could throw away a chance at launching a new, highly profitable series that could last for years. Let's take a look at two ways EA can avoid that fate.

The first game in the series, Dragon Age: Origins (2009), was a hit with critics, earning a 91% score at Metacritic for its PC version. It went on to sell 4.6 million copies. Unfortunately, based on the success of the first game, EA rushed Bioware's release of Dragon Age II (2011), a game that only spent less than two years in development compared to five years for the original.

To compensate, Bioware recycled environments and created a much shorter game than the original. Bioware also shifted from a high fantasy setting to low fantasy one between the two games, resulting in a jarring narrative shift that didn't feel cohesive with the original game. Fans of the first game weren't pleased. Dragon Age II only sold 2.3 million copies -- half the sales of the original. 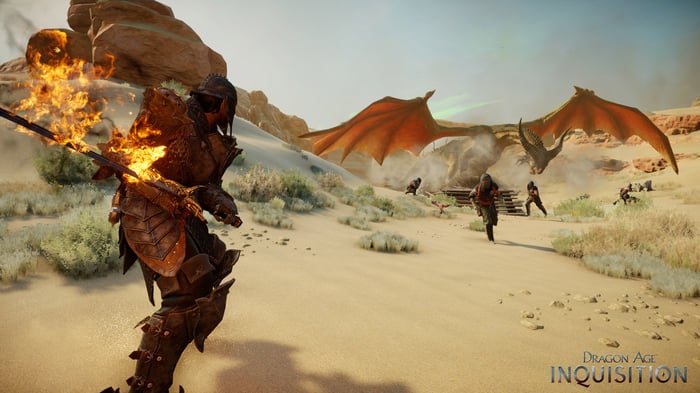 Since Dragon Age is identified so closely with Mass Effect, a positive reception for Dragon Age Inquisition will boost sales of Mass Effect 4, but negative reviews could also sink it.

Don't get greedy with the DLCs
Prior to being acquired by EA in 2007, Bioware never emphasized sales of DLCs.

The original Mass Effect, which was published by Microsoft (MSFT -0.86%) Game Studios in 2007, only had two DLCs, which cost $1 and $5 each -- both of which appeared after EA's acquisition. Mass Effect 2, which was released in 2010, included 10 paid DLCs, which cost between $2 to $10. Purchasing all of them would nearly double the price of the game.

EA reduced the number of paid DLCs for Mass Effect 3 to seven, but increased the prices to a range between $2 to $15. EA also released two multiplayer DLCs ($1 and $2) for the newly added multiplayer mode. Once again, purchasing all of these would nearly double the price of the game.

EA's business model for Mass Effect DLCs is clearly aimed at doubling the price of the base game. That business model works as long as EA doesn't get greedy. However, if we look at other EA titles, there are strong indications that EA could cross the line with newer games. EA has offered Battlefield 4 gamers five $15 DLCs, along with a $50 "shortcut" kit that includes all weapons and class upgrades. If all those add-ons are purchased, it nearly triples the price of the game.

Therefore, if EA greedily chops Mass Effect 4 up into pieces to be released separately (as it did with the controversial From Ashes DLC in Mass Effect 3), it could alienate longtime fans and kill its chances of launching a second Mass Effect trilogy.

The Foolish takeaway
In closing, Electronic Arts is usually its own worst enemy. The company's myopic goal of rushing games into holiday releases frequently backfires, as seen with Battlefield 4's ongoing technical issues.

With the new Mass Effect, EA has a valuable chance to build a new foundation for a profitable new series. Let's just hope that EA doesn't get blinded by its ambitions of rushed releases and DLCs and spoil it.

Leo Sun has no position in any stocks mentioned. The Motley Fool owns shares of Microsoft. We Fools may not all hold the same opinions, but we all believe that considering a diverse range of insights makes us better investors. The Motley Fool has a disclosure policy.

Why Did EA Delay ‘Battlefield: Hardline’ and ‘Dragon Age: Inquisition’?