PPL Corporation (NYSE:PPL) announced this week that it's spinning off its competitive business. The world of utilities has been tossed and turned with mergers and spinoffs lately -- here are three reasons PPL's new look makes your dividend stock even better.

1. More competitive scale
If there's one thing that benefits utilities, it's scale. No other industry relies as heavily on infrastructure as electricity companies. From fuel purchases to power plants to transmission lines to household distribution, utilities need scale to keep power pumping and margins afloat. It's why Duke Energy (NYSE:DUK) and Exelon Corporation (NASDAQ:EXC) both underwent major mergers in the last few years, and it's why PPL and Riverstone are joining ranks today.

"Talen Energy will be a very significant player in the U.S. competitive generation market, bringing together the best of two robust businesses with a very strong presence in the PJM region, as well as nearly 2,000 megawatts of generating capacity in the fast growing ERCOT market in Texas," said William H. Spence, PPL chairman, president and chief executive officer. "Talen Energy will have significant scale, a very competitive cost structure and the financial agility to pursue growth opportunities."

2. Steadier earnings
While current PPL shareholders will all get a slice of the Talen Energy pie, PPL Corporation is waving goodbye to its stake in the competitive energy business. And good riddance. Competitive energy can bring major profits, but it can also be a major headache. Exelon Corporation stock has stumbled in the past five years as cheap natural gas has rendered its sizable nuclear stake significantly less competitive. For the same period, PPL Corporation has managed to stay in the black, due in no small part to the fact that 85% of its 2013 earnings from ongoing operations stemmed directly from its regulated businesses. 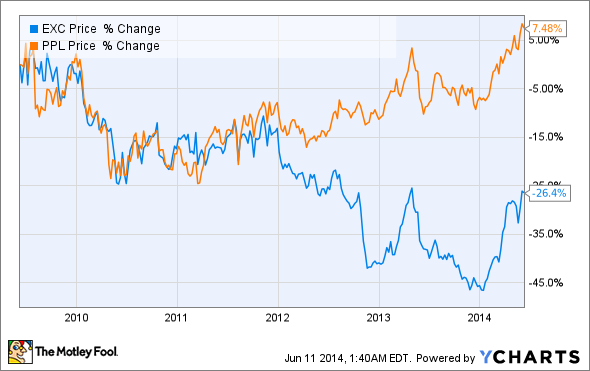 In PPL's press release announcing the spinoff, the company noted that it expects to "maintain a strong balance sheet, to manage its finances consistent with investment-grade credit ratings and to continue to provide a competitive dividend for shareowners." Spence also noted that he will be targeting a minimum of 4% compound annual growth in earnings per share (EPS), a sign that bodes well for steadily increasing dividend distributions in the years to come.

And while Just Energy Group's decision means letting go of 25% of its total expected 2015 base EBITDA, PPL will hardly feel the effects of its Talen Energy Spinoff. The company is maintaining its current 2014 guidance of ongoing earnings $2.15-$2.30 per share. As Spence explains it:

As stand-alone companies, PPL Corporation and Talen Energy each will have compelling growth prospects, and we expect the financial markets will ascribe valuations that more appropriately recognize the inherent strengths of each company. As PPL has grown its rate-regulated business portfolio significantly over the past several years, PPL's Energy Supply business has not -- in our view -- achieved appropriate equity valuation.

Stronger, steadier dividend stock
Since PPL's Monday announcement, PPL stock is up around 1.4%, while the S&P 500 has hovered at zero. But a horizon of a few days doesn't begin to touch on PPL's new prospects. As a fully regulated utility, investors can count on steadier earnings and stronger dividends for years to come.