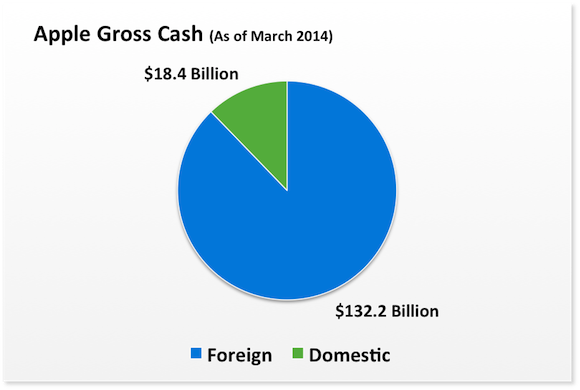 Apple (NASDAQ:AAPL) sure has a lot of cashing sitting around abroad. As Apple's international business flourishes, the Mac maker continues to grow its international coffers. Pesky repatriation taxes have kept Apple, and many other companies, from bringing home some of those dollars, instead opting to keep all that money "indefinitely reinvested" outside of the U.S. That could be about to change.

Party like it's 2004
Congress is now considering another tax repatriation holiday, which could incentivize companies to bring home foreign cash. The additional revenue could help beef up the Highway Trust Fund, which helps the government pay for transportation infrastructure. This Fund is expected to run out of cash by the end of August. The Department of Transportation's projections do look rather dreary. Nothing is set, and the debate is ongoing, but lawmakers are certainly thinking about it.

There was a repatriation tax holiday back in 2004, which reduced repatriation taxes to around 5%. This created a difficult precedent, because companies have been holding out for another. The companies that took advantage of the 2004 holiday actually ended up cutting more than 20,000 net jobs, calling into question whether or not the holiday actually led to increased domestic investment. The Treasury believes the 2004 holiday ended up costing taxpayers billions of dollars.

Having another tax holiday would further crystallize the perception among companies that these holidays do come around from time to time, further incentivizing them to keep foreign cash where it is until the next holiday rolls around.

Apple's workaround thus far has been to issue debt, which it started in 2013 to help fund its aggressive capital return program. Paying around 2% in interest sure beats a 35% repatriation tax.

The one... and only?
One major tech company recently bucked the trend by opting to pay Uncle Sam: eBay (NASDAQ:EBAY). Instead of taking out debt to increase domestic reserves, eBay simply decided to take a $3 billion non-cash charge in order to repatriate $6 billion.

While Congress sees this as evidence that some companies are indeed willing to pay up, a lot of why eBay chose to pay is because it wanted to maintain its credit rating. eBay currently has $4.1 billion in long-term debt, and levering up further could put its "A" credit rating at risk. If Congress does decide to enact a tax holiday, eBay will just have had bad timing.

Apple needs more (domestic) cash
At the end of March, Apple had $132.2 billion in cash held by foreign subsidiaries. That was the vast majority of its total $150.6 billion in gross cash at the time. However, Apple issued another $12 billion in debt at the end of April to raise domestic cash, bringing total long-term debt to around $29 billion.

If Congress offered a similar 5% repatriation tax holiday, that might be enough to motivate Apple to bring more cash home. While a 5% tax is still greater than the 2% interest -- which is tax deductible -- that Apple pays to effectively tap foreign reserves, the difference is much more manageable. When Mr. Cook went to Washington in 2013 to discuss Apple's tax practices, he pushed for broader corporate tax reform even though it would result in a higher tax bill for the Mac maker.

Part of Apple's proposed reform (link opens PDF) included a "reasonable tax on foreign earnings that allows free movement of capital back to the U.S." Cook & Co. may very well consider 5% a "reasonable" rate. Apple could earn political goodwill in the process, and its domestic cash reserves have been under significant pressure due to the aggressive capital return program.

As opposed to issuing debt every year to fund the program, as it has done during the past two years, Apple could repatriate a large chunk of money to help fund the program for several years. As of the end of March, Apple had cumulatively spent $66 billion on its capital return program. Then it boosted the program's total size to $130 billion.

Apple is very much committed to aggressively returning cash to shareholders in the long run, so its domestic cash needs aren't going to lighten up anytime soon. An act of Congress would help.