First, a brief explanation of what a trust is. These are securities that have no employees or assets. Their sole reason for existing is to own royalty rights to extract hard assets such as oil or gas and pay out distributions based on this revenue. But a trust's very nature results in several negative aspects that potential investors should be aware of.

Trusts are not allowed to grow. No new lands are allowed to be acquired and the only way for a trust's distribution to rise is for production to increase (by drilling new wells for example), or for commodity prices to rise. In addition, many trusts have limited lifespans, at which point they dissolve. This creates a very tricky situation for long-term income investing, as I'll demonstrate with the two SandRidge Mississippian Trusts.

Why investors should avoid trusts
I believe in investing in strong businesses with good management and prospects for long-term growth. A trust, by its very nature, is a depreciating asset with no hopes for growth once the drilling is done. In the case of SandRidge, both trusts were created by SandRidge Energy as a means of financing its growth. The company had an obligation to drill a certain number of wells by a certain period and has completed this obligation for Trust I and will reach this point with Trust II by 2015.

Once the drilling is done, oil and gas production will quickly decline, which will take distributions and the unit price with it. 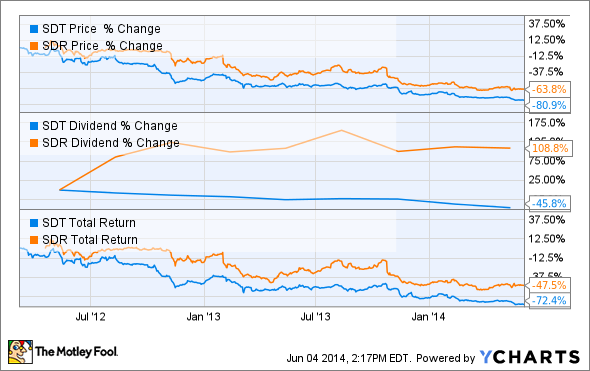 As the charts above indicate, both trusts have been disastrous long-term investments, which is something that is not likely to change anytime soon. But there is still a way for yield-hungry investors to cash in on America's oil and gas boom, but one that allows for the trifecta of investing: high-yield, growing income, and capital gains.

Upstream MLPs: a better way forward
Exploration and production MLPs such as Breitburn Energy Partners (OTC:BBEPQ) are a great way for long-term income investors to grow their wealth from America's oil and gas renaissance, but in a smarter, more Foolish manner. Breitburn's last quarter exemplifies the strength of a well managed MLP: the ability to grow through accretive acquisitions.

Last year Breitburn Energy purchased $860 million worth of oil-rich land in Oklahoma's panhandle (part of $1.8 billion in successful acquisitions since 2012).

Because of this acquisition the MLP announced a record quarter with adjusted EBITDA up 84% and distributable cash flow (DCF) up 88%. The distribution coverage ratio improved from last quarter's .93 to 1.0, and management's guidance for 2014 is very promising:

With $773 million in available liquidity, Breitburn Energy Partners is well on its way to not only delivering consistent distribution growth (6.3% CAGR growth over the last four years with 4.8% growth in 2013) but also accelerating it as well.
In fact, analysts at S&P Capital IQ are predicting 10-year compound earnings growth of 32.6% and distribution growth of 22%. 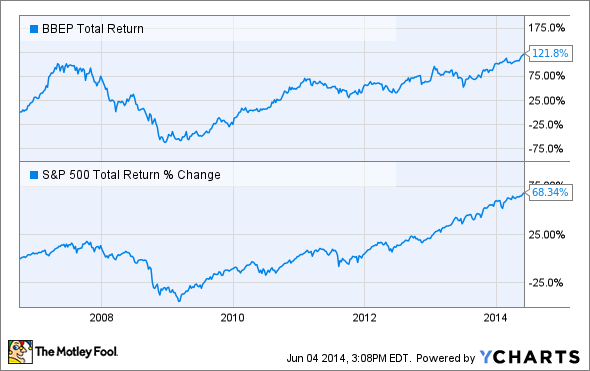 Since its IPO (in 2006), Breitburn Energy Partners has had a total return (includes distribution reinvestment) of 9.7% CAGR -- 50% better than the market's 6.7%. Given its track record of successful growth through acquisitions, high caliber of management, and ample liquidity, I have every confidence that Breitburn Energy Partners will continue to generate strong, growing income and market-smashing total returns over the long term.
Foolish takeaway
Royalty trusts, with their inherent lack of growth prospects, variable but declining distributions, and limited lifespans are a bad idea for income investors seeking to cash in on America's oil and gas bonanza. Rather, high-quality, high-yielding upstream MLPs, such as Breitburn Energy Partners, are a far better method of earning generous income that grows over time and results in capital gains and market-beating total returns.