The United States has become the undisputed global energy superpower over the past few years. According to U.S. Energy Information Administration estimates, the U.S. produced more oil than both Russia and Saudi Arabia in 2014, and more natural gas than both as well. Combined, the total output from American oil and gas wells last year was almost double that of Saudi Arabia: And while both oil and natural gas prices have fallen sharply over the past nine months, there are great opportunities to invest, especially if you're looking for income-paying stocks. Here are seven high-dividend natural gas stocks that might jump out at you: 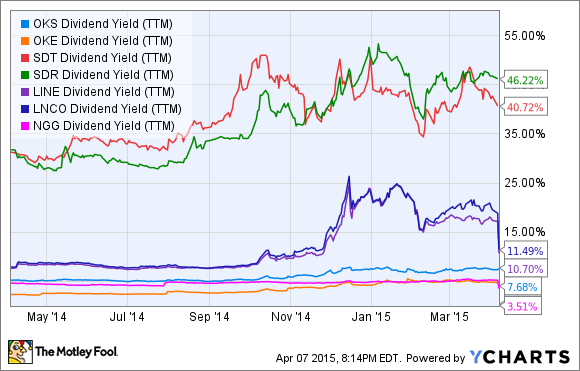 While some of these payouts are clearly too good to be true, there's some value to be had further down the list. Let's take a closer look.

Big payout is a classic value trap
The 40%-plus dividend yields you see from Sandridge Mississippian Trust I (NYSE:SDT) and Sandridge Mississippian Trust II  (OTC:SDR) aren't the real payout you would get over the next year if you bought into these two trusts today, but a reflection of the payout over the past year, based on today's price. Here's what the share price and dividend have done since January 2014: 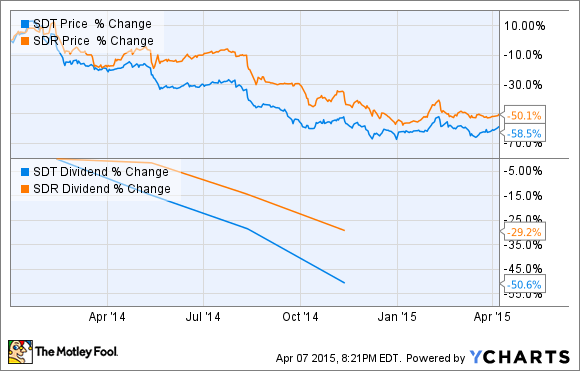 Both produce more gas than oil, but oil has an outsized impact on the results. And as their names reveal, they are trusts, meaning you don't actually own shares of a business, but rights to royalty payments from the oil and gas assets held in the trust. As fellow Fool Adam Galas wrote recently, the sponsor of these trusts is done drilling new wells, meaning both will continue to produce less and less gas and oil going forward.

That means smaller and smaller payouts for investors with each passing quarter, barring a big rebound in oil and gas prices. Frankly, it's hard to say what real long-term value there is in these trusts, because it's really all tied to commodity prices. If oil and gas prices were to rebound strongly in the near future, it would be a boon for the trusts and investors, but that's a coin-toss at best, with no clear catalyst for a price recovery in sight. Factor in the inflexible nature of a trust versus an actual company, and that makes for too much uncertainty.

Better risk-reward, but you might need antacid
Independent natural gas and oil producer LINN Energy LLC (OTC:LINEQ), along with its sister company, LinnCo LLC (NASDAQ: LNCO), also shows a big fat yield, but it has also seen its share price get killed after it cut its dividend. 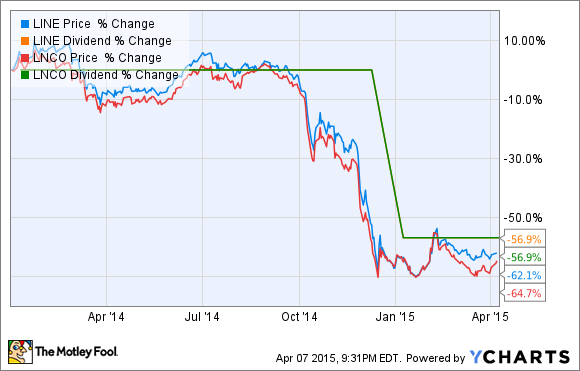 But unlike the high-yielding trusts I've mentioned, LINN Energy is a "real" company, with all the tools at its disposal to adapt to a changing environment. The company gutted its capital-expenditure budget for 2015 in an effort to ride out low prices with existing capital and cash flows. LINN also has an extremely strong hedging program, especially for its natural gas production, which is 100% hedged for the next three years. These actions will help, but its oil hedging does leave some exposure, and if current oil and gas prices hold steady -- or even fall -- for the remainder of the year, LINN could face a cash crunch.

But the biggest risk is tied to the more than $10 billion in long-term debt, costing hundreds of millions of dollars per year to service. Such high leverage makes LINN less flexible, especially if the worst happens and oil falls further.

I think the long-term upside is higher for LINN than for the two trusts I've mentioned, and the risk is probably lower. However, if it's a dependable high dividend yield you're counting on, there's too much risk that LINN cuts payouts again. If that happens, you can guarantee the stock price will get slashed, too.

The trait that they share is the key for me: "tollbooth"-style businesses that are based on service fees they charge others to use their pipeline and utility grid assets.

The fees are largely unrelated to commodity prices but instead are based on demand. For ONEOK, this means its core natural gas pipeline business, which is connected to several major shale plays, is likely to experience big demand for decades to come. For National Grid, which operates both natural gas and electricity utilities in the U.S. and U.K., again, it's all about long-term demand first and foremost.

While National Grid is more exposed to regulators, which set the rates it can charge in many cases, the company's dividend is not at risk from cheap natural gas prices. That's largely the case for ONEOK as well, though it does have some exposure to natural gas liquids prices.

Invest at your own risk (level)
If it's s dependable high yield and relatively low risk of capital losses you're looking for, the last group is certainly the way to go. As to the two trusts, frankly, it's hard to say how much an impact the current low-price environment for both gas and oil will have. At some point the trusts could make for a solid income play, but as long as gas and oil prices stay deflated, the only value of the trusts -- royalties from profits -- is at serious risk. If you're willing to take on some risk, then LINN may be worth a look. Just acknowledge that there's more than a remote chance the dividend gets cut again, and if that happens then LINN is probably facing some very troubling days ahead.