In a previous article I outlined why royalty trusts were terrible long-term investments and why income investors should choose upstream MLPs as an alternative. Since that time, while researching Linn Energy (OTC:LINEQ) and its recent deal with ExxonMobil a stark contrast has become evident to me that I wanted to share with you.

As pointed out by my colleague Matt DiLallo in this article comparing SandRidge Energy (NYSE: SD) and SandRidge Mississippian Trust II (OTC:SDR), SandRidge Energy's trusts were established as mere financing vehicles for the parent company to invest in its own drilling program. For example, SandRidge Energy has plans to invest $1.55 billion annually in its Mississippi lime assets through 2016 in order to grow production by 20%-25% annually (in spite of expected decline rates of 35% in 2014, 20% in 2015, and 15% in 2016).

SandRidge Energy has stated that it will complete its drilling program for SandRidge Mississippian Trust II by 2015. The pace of drilling has been dropping (6.9 new wells drilled in Q1 vs 10.7 in the prior quarter) and despite the fact that new wells are still being added, SandRidge Mississippian Trust II reported a 17% decline in oil production resulting in a 13.9% decline in distributable income on a quarter-to-quarter basis. 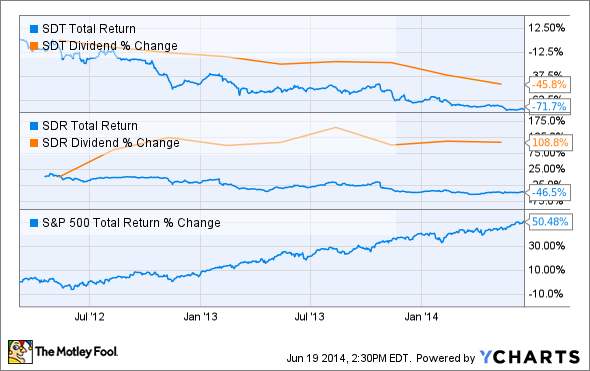 As the chart illustrates, SandRidge's other royalty trust, SandRidge Mississippian Trust I (NYSE:SDT), which has already had its final wells drilled, has been experiencing a severe decline in distributions, a result of its massive quarterly production declines of 26%, 21%, and 22% immediately after the last well was drilled.

A royalty trust, by design cannot grow through acquisitions. The only way for distributable income to grow is through additional drilling or commodity price increases. With SandRidge Energy stating that its drilling program is coming to a close both of its trusts are facing perpetual declines in production, distributions, and unit prices. Why would SandRidge Energy cut off its trusts and refuse to invest in additional drilling? Simply put, because it has concluded that the assets owned by its trusts are tapped out and not worth further investment.

According to its prospectus, SandRidge Energy started out owning 38.4% (6 million units) of its Mississippian Trust I and 47.7% of Trust II (12.2 million units). It received incentive distribution rights of 50% of distributable income for exceeding certain target distributions by 20%.

Today, SandRidge Energy owns just 528,000 units of Mississippian Trust I and 6.24 million of Trust II, having sold 91% and 51% of its respective stakes. A key investing principle at The Motley Fool is investing alongside management (high insider ownership). If a founder of a company liquidated such enormous percentages of his/her original holdings, shareholders might rightfully worry about the company's future. In this case, SandRidge Energy's lack of further investment in its trusts is a clear sign to investors that SandRidge Mississippian Trusts I and II have no future and don't deserve a position in your portfolio.

Linn Energy: growth you can believe in
I view Linn Energy and its non-MLP alternative LinnCo (NASDAQ: LNCO) as one of the highest quality high-yield investments in America, specifically because of its strong track record of accretive acquisitions and growth (60 acquisitions worth $15 billion since its 2006 IPO). 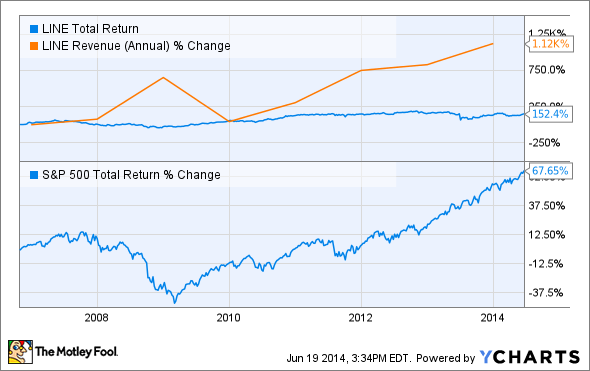 But what has me really excited about Linn Energy is its latest deal, a massive land swap with ExxonMobil, and what it means for the future of how this MLP does business.

For an in-depth explanation of the deal see this article, but the bottom line is this: Linn Energy traded 25,000 acres of Permian basin land (expensive to drill and fast depleting) for 500,000 acres of Hugoton basin land (already producing substantial natural gas and a 6% decline rate).

In the process it lowered its costs, overall production decline rate, and secured its distribution. But Linn Energy might just be getting started. It still owns 30,000 acres of Permian land (that's sitting atop 75 billion barrels of oil in the world's largest oil deposit) as well as 545,000 net acres of Midcontinent assets that face high decline rates but are still of interest to companies such as Apache and SandRidge Energy.

With Linn Energy's CEO Mark Ellis stating a desire to monetize not only Linn's Permian but also Midcontinent assets, future land-swap deals could be in the works, which would mean likely continued distribution growth for Linn Energy and LinnCo investors (historically 4% annual growth on top of a 9.4%-9.8% yield).

Foolish bottom line
Royalty trusts are designed to be a decaying short-term investment. Upstream MLPs, such as Linn Energy and LinnCo, on the other hand, are living, growing investments with a proven track record of safe, consistent income, and distribution growth along with excellent long-term prospects. Investors considering SandRidge Mississippian Trusts should follow the example of SandRidge Energy: sell their positions, and consider Linn Energy or LinnCo as superior alternatives.