A definitive feasibility study (DFS) is the most in-depth evaluation of a proposed mining project. It requires a significant amount of time, expense, and formal engineering work. The results are typically accurate to within 10-15%.

For Alacer Gold (TSX: ASR) it will determine whether or not to move forward with building a 5,000 tonne per day pressure oxidation (POX) mill. This new facility would complement Alacer's heap-leach mining operations in Turkey, where it currently produces over 200,000 ounces annually (80% attributable to Alacer) at a cost that is among the lowest in the world -- below $800 per ounce all-in.

Why should you care?
In previous presentations, Alacer's management team has stated the DFS would be published June 2014 (during Q2), so analysts are on the edge of their seats. Publishing of the DFS will provide investors with a glimpse into Alacer's future.

To date, the Copler mine has been a heap-leach operation, treating oxides, of which Alacer will continue doing at a low cost through at least 2017. The problem (and opportunity) is that sulfide rocks represents 62% of Alacer's measured and indicated resources, currently standing at 194 million tonnes at 1.4 g/t (grams per tonne). Sulfides aren't conducive to heap leaching, the way oxides are.

Smaller plant + higher gold grades = improved economics
To mine its large resource base effectively, Alacer will need to build a whole-ore pressure oxidation facility. Back in 2011, a pre-feasibility study on an 8,000 tpd (tonnes per day) POX facility showed positive economic returns. Recovery rates were 94%, using gold grades of 2.2 g/t. The cost would have been $410 million to produce 210,000 ounces annually, sporting an IRR of 24%. The more thorough and in-depth DFS, coming soon, will shed light on the economics of a smaller 5,000 tpd plant.

Alacer has stockpiled 315,000 ounces of gold in sulfides with grades of 4.89 g/t. Reconciling these higher grades versus the stated resource (1.4 g/t) has analysts and geologists perplexed. Is it really real?

When combining a smaller processing facility with higher grades, will it equate to lower costs and higher return on investment? We'll just have to wait and see, but the answer is coming right around the corner. I'm expecting the DFS to portray profit potential and economics that are too good to refuse, and the POX plant will get built. If that's the case, then Alacer's stock price will likely react positively to the news.

Turkey's perceived political risk ... neutralized?
Over the past nine quarters, Alacer has generated $310 million in operating cash flows. If you back out the cash, roughly $300 million, it's currently trading for 2.7 times operating cash flow.

In fact, the money is so good it has attracted two tycoons. Vladimir Iorich via Pala Investments owns about 20%, likely at a higher cost basis than where you can buy today.

Perhaps more strategic for Alacer, Ahmet Calik, a supposedly well connected individual who owns one of Turkey's largest conglomerates is 20% owner of the Copler mine (via Lidya Mining / Calik Holding). In addition, Ahmet's Lidya is a joint partner in all of Alacer's exploration properties. Perhaps Calik's influence could provide shelter from any political storm, should it ever arise.

Back to back times eight
As you'll see in the chart below, Turkey's total gold production has increased eight years in a row. Last year, 33 1/2 tonnes of gold came out of just seven mines. Turkey is aiming to hit 50 tonnes by year 2015, which would place it among the world's top 15 largest producers. 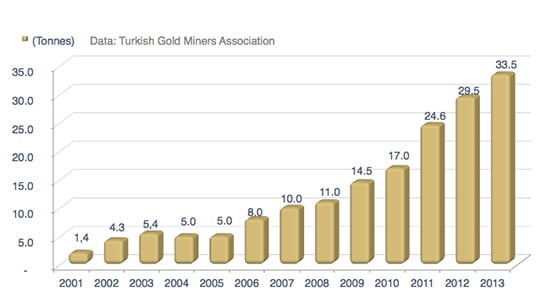 Who's responsible for the increase?

In addition to Alacer's Copler mine, the second largest, Eldorado Gold (NYSE:EGO), is the only publicly traded stock with operations in Turkey. Combined, its Kisladag and Efemcukuru mines produce over 400,000 ounces of gold annually at industry low cash costs -- between $470 and $590. Looking toward Eldorado's future production in Turkey, it has more than 10 million ounces of proven and probable reserves (90% at Kisladag). Presently, the company is evaluating an expansion of the Efemcukuru plant, potentially increasing the mill throughput to 500,000 tonnes per year.

Alamos Gold (NYSE:AGI) has three development stage projects in Turkey: Kirazli, Agi Dagi, and Camyurt. If either of those move toward production, they would be operated as conventional open-pit heap-leach operations. With today's gold prices, heap-leach operations are very desirable, as they require the low upfront capital, low sustaining costs, and high returns on investment. If necessary, Alamos will have no problem self-funding these projects, in addition to having $400 million cash with no debt, its Mulatos mine (located in Mexico) is expected to produce more than 150,000 ounces this year at all-in costs below $1,000.

Final thought
As an investor in mining stocks, take the time to read feasibility studies for companies and exploration properties you are considering. Not unlike this article, the material can be quite dry, but that information will help you learn to recognize winning projects and avoid losers.