Hate the big banks? I'd be willing to bet you -- and millions others -- like them more today than you did just a few years ago.

Five of the biggest and most well-known banks saw their reputations plummet as a result of the financial crisis. But it turns out Bank of America (NYSE:BAC), Citigroup (NYSE:C), Wells Fargo (NYSE:WFC), JPMorgan Chase and Goldman Sachs have seen quite a rebound following the depths they found themselves in.

And this could mean big things for both them and their investors.

The rebound
For the 15th year in a row, Nielsen released its survey of almost 20,000 Americans to get their opinion 60 massive companies and brands. The questions spanned six different areas, including emotional appeal, social responsibility, products and services, financial performance and others. Its study, known as the Harris Poll Reputation Quotient, then takes opinions across all those areas and in turn assigns a number between 0 and 100.

The biggest news came from the banks, as the study noted, "financial services shows glimmers of hope." Four of the largest increases in scores all came from the industry, and the number of positive ratings nearly doubled from 17% in 2012 to 32% in 2014.

As shown in the chart below, the banks have been on quite a rebound: 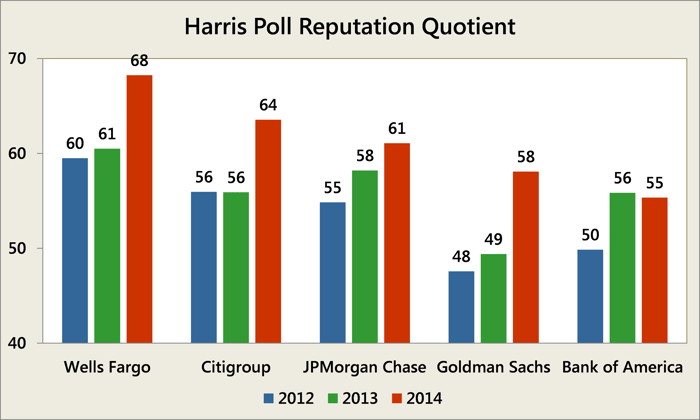 While Wells Fargo is the only bank to earn the "Fair" rating -- those with an RQ score between 65 and 69 -- and the remainder sit in the "Poor" range (55-64), they have all seen sizable improvements over the last few years, particularly Wells Fargo, Citigroup and Goldman Sachs.

But of course, the biggest question comes from Bank of America, which was the only bank to see its reputation actually fall -- albeit by just 0.5 points -- from 2013 to 2014.

The big question
It first must be noted that Bank of America -- like Goldman Sachs -- saw its reputation technically below 50 in 2012 with a score of 49.9. This was deemed to be in the "Critical" range, and as Harris noted at the time, this was "dangerous territory," as this meant it occupied "the same sub-50.0 space that defunct companies occupied in years past before expiring."

Considering the 2012 rankings were based on survey results from December 2011, a few months after questions about Bank of America's ability to even exist swirled and just weeks from the announcement and subsequent elimination of the $5 debit card fee , it's understandable Bank of America had the largest decline of RQ score across the 60 companies, falling by 9 points.

So what does that have to do with the 2014 rankings? Well, while it's troubling to see it fall, it must be noted it actually had the largest reputational rebound in 2013 across all 60 companies. And beyond that, we must be reminded of the deep issues it dealt with in years past, so it's understandable the recovery will not occur over weeks or months, but years.

If Bank of America fell again in the rankings for next year, it would be discouraging and would raise questions about its future. However it has continued to focus its efforts on its customers, and it has seen remarkable improvements over the last two years. The happier its customers are, the more likely they are to improve the opinions of others across the country.

Looking ahead
It is encouraging to see the reputational turnaround at the biggest banks, because it could mean more customers starting new relationships with them which will be a boost to their bottom lines.

And while Bank of America is at the bottom of the banks mentioned, it may just mean the best is yet to come.