GW Pharma (NASDAQ:GWPH) and Insys (NASDAQ:INSY) hope to create effective treatments based on chemical cannabinoids found in marijuana. GW Pharma is already selling a THC synthetic drug as a treatment for Multiple Sclerosis spasticity in 11 countries, and the company is conducting a range of studies evaluating cannabinoids therapeutic value across cancer pain and diabetes. Meanwhile, Insys is working on a new version of Marinol, a long-standing THC-based drug used to prevent nausea in chemotherapy patients.

Investor interest in these new therapies has caused shares in both companies to spike in the past year, but is one a better buy than the other? 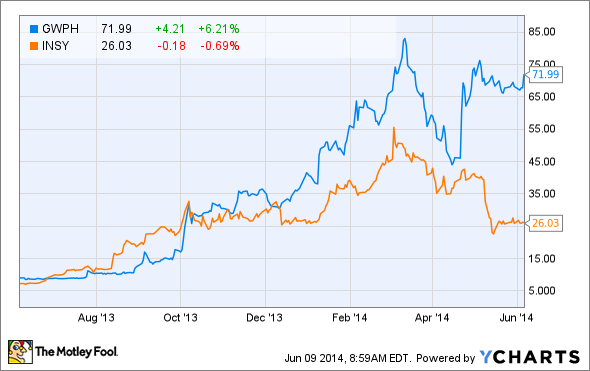 Big hype = big valuation
Sales of GW Pharma's Sativex totaled just $13 million in the first quarter, giving it an annualized sales run rate of roughly $60 million and a price to sales valuation north of 20. That's a heady valuation for any company, particularly one that lost more than $8 million last quarter.

In comparison, sales of Insys' opioid pain killing drug Subsys have jumped over 300% in the past year to $40 million in the first quarter. That gives Insys a price to sales valuation of roughly 5. In addition to having a lower price to sales ratio, Insys has another advantage over GW Pharma: it makes money. While Insys' net income has reached nearly $50 million over the past 12 months, GW Pharma has notched $20 million in losses. 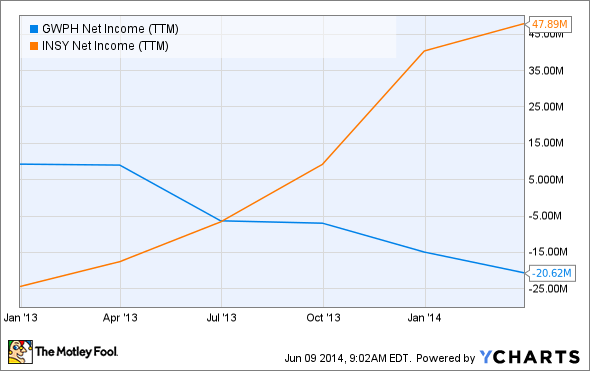 Delivering on potential
A lot of the valuation awarded to both these companies is based on future sales, not historical sales.

At GW Pharma, investor enthusiasm stems in part from the potential to expand Sativex's label to include other important indications beyond MS. The Food and Drug Administration recently awarded Sativex fast-track designation, for example, for use in treating cancer pain. Sativex is currently in phase 3 trials for that indication and GW Pharma expects to report data from those trials later this year.

GW Pharma is also exploring Sativex as a diabetes treatment and recently announced that the FDA has awarded fast-track status to Epidiolex, a drug for use in a rare form of epilepsy in children.

Whether GW Pharma's trials prove its cannibinoid treatments effective in these new indications remains to be seen; however, even if it does, investors may want to keep their projections in check. The indication for cancer pain is a second line therapy for those who don't respond to opioids, not a first line treatment. Given that companies like Insys (with Subsys) are creating effective opioids, its unclear how much of the market GW Pharma can capture. GW Pharma's potential for Epidiolex may also be small. Dravet Syndrome, the form of epilepsy for which Epidiolex received fast-track status, is uncommon with just 5,400 patients in the U.S. and 6,700 in Europe.

Insys thinks it can similarly reshape the market for Marinol, a drug given to prevent nausea in cancer and HIV patients. The market for Marinol peaked above $100 million before AbbVie lost patent protection on it and Insys believes a new, better-acting version of Marinol could have similar nine figure potential. Of course, that depends on the FDA giving it a green light. Insys plans to file for that approval before mid year.

Fool-worthy final thoughts
GW Pharma has used investor enthusiasm to shore up its balance sheet, raising $100 million in January through a follow-on stock offering. That brought its cash position to more than $150 million exiting the first quarter and puts it on solid financial footing for ushering drugs in its pipeline through trials and to market.

Insys' cash has also climbed in the past year, but is far less substantial at $40 million. That may not give Insys a lot of wiggle room, particularly given recent concerns over regulator scrutiny of its marketing practices. Similar scrutiny of Teva's opioid treatments eventually resulted in a $400 million settlement back in 2008. 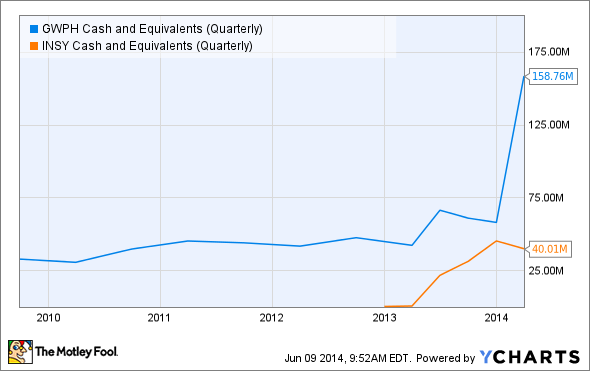 Investors will need a lot of things to go right at GW Pharma to justify its sky-high price to sales, including approvals in more indications. While cheaper, Insys has risk too, including whether fall-out tied to regulator questions derail Subsys success and whether Insys' Marinol formulation gets approved. That said, uncertainty at both companies should, for now, keep all but the most aggressive investors at bay.