Please ensure Javascript is enabled for purposes of website accessibility
Log In Help Join The Motley Fool
Free Article Join Over 1 Million Premium Members And Get More In-Depth Stock Guidance and Research
By Todd Campbell – Apr 27, 2014 at 10:30AM

If medical marijuana evokes a picture of folks sitting in circles passing marijuana cigarettes, then you'll likely be surprised to learn how drugmakers like GW Pharmaceuticals (GWPH) are using the plant to develop next-generation medicine.

GW Pharma has been studying ways to use the chemical compounds found in marijuana since 1998, and the company already markets one marijuana based drug, Sativex, in more 11 countries. That drug combines two key marijuana cannabinoids, THC and CBD, to treat multiple sclerosis.

However, GW Pharma doesn't believe the medical benefit from THC and CBD is limited to MS. It thinks they could play an important role in improving patient treatment for a variety of disease, including diabetes. 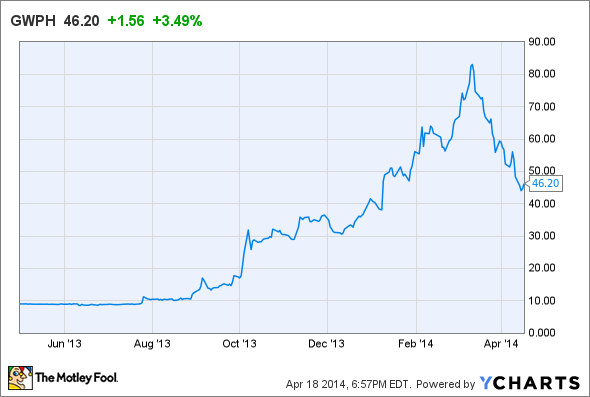 Marijuana as a a diabetes therapy?
While the market embrace of Savitex has been tepid at best -- it sold less than $4 million of the drug in 2013 -- GW Pharma thinks it may have a chance for greater success in diabetes. That thinking is certainly backed up by the significant, and growing, need for new diabetes treatment. Roughly 70 million diabetics live in developed countries, and nearly 2 million people in the U.S. alone are diagnosed with the disease each year.

The sheer size of the patient population makes diabetes the most expensive disease in terms of drug spending, according to drug wholesaler Express Scripts. Spending on diabetes medication jumped 14% last year, and is expected to grow by 11% this year, and another 12% next year.

As a result, treating diabetes has spawned a slate of billion-dollar blockbuster treatments, the biggest of which is Sanofi's Lantus. Sanofi's Lantus commands 7% market share among diabetes drugs, and Lantus sales totaled more than $7.5 billion last year.

While Lantus is a long-acting insulin, Novo Nordisk (NVO 2.93%) and Eli Lilly are two of the globe's biggest sellers of short-term insulin. Novo's Novalog has more than 40% market share in rapid-acting insulin, and Lilly's Humalog had sales of $2.6 billion last year.

The commercial success of those drugs is driving significant innovation in diabetes treatment, too. Drugmakers like Johnson & Johnson (JNJ) are launching SGLT-2 inhibiting drugs that help the kidney better regulate glucose levels.

Johnson's Invokana was the first SGLT-2 to reach the market, and while J&J doesn't break out sales of Invokana yet, the company's "other" drug sales, which includes Invokana, grew 15% year over year to nearly $300 million in the first quarter.

And Novo's Victoza, a GLP-1 drug that hit the market in 2010, is already selling more than $300 million a quarter -- despite competing against AstraZeneca's Byetta and Bydureon, which combined generated about $1 billion in sales for AstraZeneca last year.

Given the number of top-selling therapies, investors can understand why GW Pharma is eager to tap into that large and growing market. To do that, GW Pharma has already conducted a pre-clinical and an early stage trial of its cannabis-based drug GWP42004.

Whether those desirable effects will be enough for GW Pharma to eventually capture a part of the diabetes treatment market is a reasonable question. First, GW Pharma will need to prove that those benefits hold up in larger studies. The first of those studies, a phase 2 trial, is expected to begin this year.

Fool-worthy final thoughts
The potential to develop medicines from marijuana is endlessly intriguing, and companies like GW Pharma have already invested big money in evaluating cannabis in a variety of disease. Turning those investments into sales, however, has remained somewhat elusive, and the recent interest in medical marijuana has caused GW Pharma's share price to soar to arguably overpriced levels, especially given its lackluster sales.

This suggests that GW Pharma, while showing plenty of promise, but little in the way of profit, remains highly speculative. Given that, investors should take a wait-and-see approach to see whether the company can deliver on its hope to improve how we treat this important disease.

Todd Campbell has no position in any stocks mentioned. Todd owns E.B. Capital Markets, LLC. E.B. Capital's clients may or may not have positions in the companies mentioned. Todd owns Gundalow Advisors, LLC. Gundalow's clients do not have positions in the companies mentioned. The Motley Fool recommends Express Scripts and Johnson & Johnson. The Motley Fool owns shares of Express Scripts and Johnson & Johnson. Try any of our Foolish newsletter services free for 30 days. We Fools may not all hold the same opinions, but we all believe that considering a diverse range of insights makes us better investors. The Motley Fool has a disclosure policy.