Today, news broke that Nuance Communications (NASDAQ:NUAN) and Samsung (NASDAQOTH: SSNLF) have held acquisition talks. The news eventually led to Nuance being halted due to volatility, but the end result should have sent a chill through Cupertino, as an Samsung/Nuance merger could have huge ramifications on Apple's (NASDAQ:AAPL) iPhone.

Wasn't this supposed to be Apple?
As it's been widely reported, Apple's Siri is powered by Nuance. A couple of years ago, Apple co-founder Steve Wozniak had the Internet on fire when he mentioned in passing that Apple had acquired the voice recognition company. Of course, those rumors later proved untrue but the rumor mill burned slowly for this deal. It briefly reignited when Carl Icahn disclosed his stake in Apple; the investing community is well-aware of his stake in Nuance and his son's appointment to the board of directors.

A Siri-less Apple?
The big risk to Apple is losing Siri. Apple has been lukewarm about admitting it, but it is widely reported that Apple's "digital assistant" is powered by Nuance. When Siri was first introduced, it was considered a massive step forward in the phone's evolution. The company planned a huge ad blitz centered around the function and Apple went on to sell 4 million iPhone 4s units its first weekend – much more than the 1.7 million iPhone 4 units in its first weekend.

Moving forward to today, Apple is coming out of the doldrums on the back of a successful iPhone 5s launch, a great earnings report, and a recently completed stock split. 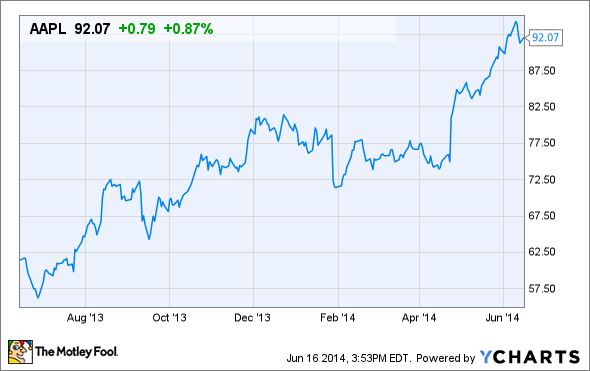 AAPL data by YCharts
If this rumor ends up being true, and Siri is lost from the iPhone, this will be a huge blow to the iPhone line and a risk to Apple's fantastic year.

Foolish final thoughts
It is important to understand that while this is a fast moving story, we shouldn't get too far ahead of ourselves with speculation. The risk to Apple is there, but don't put it past Cupertino's finest to secure Siri's functionality going forward – either by a deal with the acquirers or making an in-house solution. In the meantime, it will be interesting to see what happens to Nuance – and to watch Samsung's strategy going forward.