Apple (NASDAQ:AAPL) likely has more than 800 million credit cards on file. On the company's most recent earnings call, Tim Cook mentioned the company was close to this.

To put that number in perspective, it's more than three times the number of active users at e-commerce giant Amazon.com (NASDAQ:AMZN). Indeed, Apple's app store sees more visitors every week than any e-tailer sees in a month.

So, Apple certainly has everything it needs to launch a payments platform, and there's one big reason why it would succeed. But it must act fast. 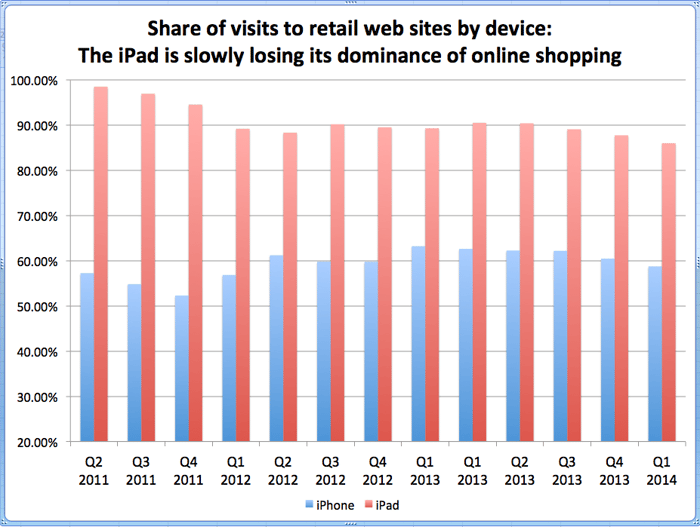 According to recent data from Monetate, Apple is slowly losing share of online shopping. The iPad now accounts for a "mere" 86% of tablet shoppers, and the iPhone accounts for 58% of smartphone shoppers.

Granted a lot of that shopping is done on sites like Amazon that have their own checkout and payments system. Hundreds of other small e-tailers, however, could greatly benefit from a simple mobile payments system. Apple is uniquely positioned to offer that service.

Apple can provide a simple, seamless payments system for mobile shoppers with no additional sign-up required. Just scan your fingerprint using its Touch ID, and the items are paid for using your iTunes account.

What about Google?
It's quite clear that more Android users are shopping online as well. Google already has a payments platform, Google Wallet, and it has millions of credit cards on file through its Google Play store.

Google has a huge opportunity, but it's been unable to take advantage of it. Even if Google was successful at integrating Wallet with more mobile e-stores, its solution would not be as smooth as Apple's.

Android suffers from a fragmentation problem. There are several active versions of Android running on hundreds of different phones. That makes for extra hurdles for Google to overcome in order to implement simple checkout. Those hurdles will likely include users establishing a new account.

Amazon may be a bigger threat
Last week, Amazon updated its "Login and Pay" service to include subscriptions. The week before, it invited people to an event on June 18 that is expected to be the unveiling of its long-rumored smartphone.

An Amazon-branded smartphone that integrates Amazon's payments platform could be a serious threat to Apple's would-be payments solution. Amazon has its work cut out for it, considering the number of active iPhone users, but it certainly has the pull to attract smartphone shoppers. If Amazon's phone is built with shopping in mind -- and why wouldn't it be? -- it could attract more online retailers to its payments platform.

The one thing working against Amazon is that it competes with every other retailer -- the companies that would use it payments platform.

Not just e-commerce
Apple also has the potential to expand a payments platform beyond e-commerce with its iBeacon technology and the widespread use of iDevices in stores. Brick-and-mortar solutions are much more difficult, especially considering the ease of credit cards. Nonetheless, it's a big possibility.

But if Apple's going to succeed with a payments platform, it's going to be in online mobile commerce first. Considering the majority of smartphone and tablet users that shop are already using Apple devices, Apple stands a good chance of succeeding. The competition is catching up, however, so it needs to act quickly.

The Biggest Reason Apple Would Succeed With a Payments Platform, and Why It Needs to Act Fast @themotleyfool #stocks $AAPL $AMZN $GOOG Next Article
Current