On June 12, Amazon.com (NASDAQ:AMZN) announced a new feature to its Amazon Prime membership called Prime Music. Although some investors might find the development of the company's flagship product exciting, the market reacted by sending the business's shares down nearly 3% to $325.91. Is this a sign that Amazon's add-ons to Prime are diluting shareholder value, or will the company's service be so successful that it could threaten the existence of companies like Sirius XM Holdings (NASDAQ:SIRI) and Pandora Media (NYSE:P)?

Amazon's new service rocks... literally!
By paying the $99 yearly fee, individuals can become members of Amazon Prime. Included in the service is free two-day shipping on over 20 million items, access to over 40,000 movies and television shows via the company's Prime Instant Video service, and the ability to "borrow" more than half a million books through the company's Kindle library.

With over 20 million subscribers at last count, Amazon Prime can be expected to generate at least $2 billion in sales for Amazon this year. As a percentage of sales, this part of the business's operations is surprisingly small at 2% of forecasted revenue for the current fiscal year. Margins have yet to be disclosed on the service because it's too small relative to revenue for Amazon to have to disclose, but more likely than not, the company is using the service as more of a marketing tool designed to bring buyers to its website than anything.

Now, with the addition of Prime Music, Amazon is bringing more than 1 million songs from top artists to its platform. On top of listening to the music you want at no extra charge, Prime Music allows users to create their own library and playlists, listen to the company's pre-set playlists, and receive song recommendations... all with no advertisements. To make things even sweeter, Amazon has made it possible for listeners to play their music on most any device and to download the music for offline listening to avoid data charges.

Will Amazon put Sirius and Pandora out to pasture?
One potential consequence of Prime Music is that it could mean trouble for Sirius and Pandora. Over the past five years, these streaming services have seen their sales soar and, in the case of Sirius, profits rise. Can these businesses stand up to a player whose market power surpasses theirs combined? 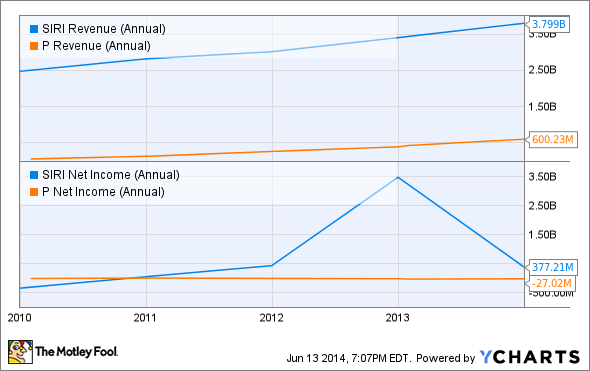 Although Amazon has not provided official subscriber data related to its Prime memberships, the company's statement that its user count has surpassed the 20 million mark means that it's on par with Sirius' 25.6 million base (21.1 million or 82% of whom are paid users.) What's more is the fact that Amazon's service, which includes all of its other perks, is far cheaper than the $119.88 to $199 per year charged by Sirius. Possibly the only positive note for Sirius is that the company has its radios installed in over 50 million vehicles, which may serve as a deterrent from switching to Amazon's platform even in spite of cost-savings.

Because of its revenue composition and the fact that the business has yet to turn a profit, Pandora might be even more susceptible to Amazon's entry into the music space. Currently, the streaming service charges just $36 per year for its Pandora One subscription but at just 18% of sales (versus the 82% of revenue it generates from advertisements), even it could be negatively affected by Prime Music's decision to avoid advertisements.

Foolish takeaway
Right now, Amazon is trying to be everything to everybody. While this is a noble ambition, shareholders appear to see the company's attempts as a distraction from value creation. In the long run, management may prove itself right but it's also possible that shareholders will end up with less money in their pockets if the company cannot use services like Prime Music to generate attractive returns. In the event that investors are wrong about Amazon's move, it could mean trouble for other streaming services like Sirius and Pandora because of the company's market presence and the cost and convenience factors at play.