In its first-quarter earnings release on Jun. 12, Lululemon Athletica (NASDAQ:LULU) announced that its board of directors had approved a $450 million share buyback. At first glance, the news might come across as a bullish indicator, especially when you consider that its revenue and adjusted earnings came in above the forecasts. However, when you consider that the company's metrics during the quarter pointed to declining comparable-store sales, does this indicate that Lululemon's share buyback is sub-optimal and that now might be the time to consider taking a stake in rival Under Armour (NYSE:UAA) instead?

Lululemon's amazing run!
The past five years have been really good for Lululemon. Between 2009 and 2013, the retailer saw its sales climb 251% from $452.9 million to $1.6 billion as an 105% jump in store count and an 116% improvement in aggregate comparable-store sales helped the company grow phenomenally fast. This stands in stark contrast to Under Armour which posted strong (but modest when placed next to its rival) growth of 172% with revenue rising from $856.4 million to $2.3 billion. 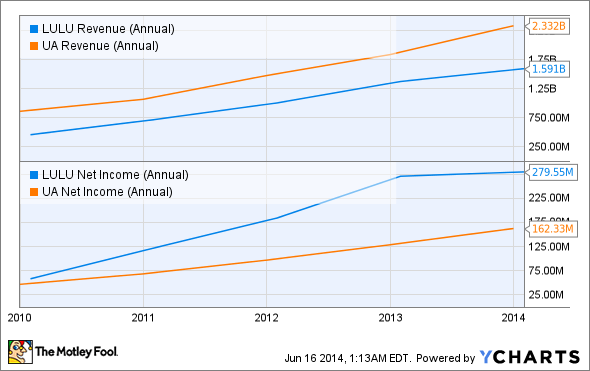 In addition to seeing strong sales growth, Lululemon posted impressive net income growth. Over the same five-year period, the retailer's bottom line grew 379% from $58.3 million to $279.5 million. This growth resulted, in part, from the company's jump in sales but also stemmed from its core costs (its cost of goods sold, plus selling, general, and administrative expenses) falling from 80.8% of sales to 75.4%. During this same period, rival Under Armour saw its profit rise 247% from $46.8 million to $162.3 million.

Is Lululemon hiding its problems?
In its earnings release, Lululemon announced that its sales had grown 11% from $345.8 million to $384.6 million during the quarter. While this represents a nice uptick in revenue, the main driver behind it was a 21% jump in store count, which was negatively affected by a 2% decline in comparable-store sales. It was this drop in comparable-store sales that likely caught the most attention from investors, as it's a far better indicator of a retailer's success than how many locations it has added.

Moving forward, this kind of news, if it continues, could hurt the business significantly. For this reason alone, it might be time for management to start thinking of ways to offset this development instead of buying back its shares. With the $450 million the company's board of directors has allocated to share buybacks, the company could increase its research and development initiatives or consider buying a rapidly growing rival. Given its market cap of $4.4 billion, Lululemon likely wouldn't be able to buy Under Armour, which is valued at $12.3 billion.

Foolish takeaway
Right now, Lululemon appears to be a great company that has hit a speed bump, as evidenced by its declining comparable-store sales. However, the fact that the business posted a return on equity of 25% last year and is on track to grow revenue by up to 13% from $1.6 billion to $1.8 billion this year suggests that it's an appealing prospect for the Foolish investor.

With returns and growth like this, it's difficult to justify returning cash to shareholders when the business should be focusing on improving its operations through development efforts and may even want to consider some M&A activity.

If management does consider this course instead of its previously announced intentions, this could provide immense long-term returns to the business's shareholders. Meanwhile, the alternative move of returning its cash to shareholders will serve to consolidate ownership, but will come at the cost of forgoing valuable resources at a time when the company's brand appears to be in need of an overhaul.