In case you're wondering why PotashCorp (NYSE:POT) stock rose more than 6% this past week, here's the big news you may have missed: In an announcement made this past Monday, the fertilizer giant called off some of its previously planned layoffs, citing tight market conditions for granular potash. As the potash industry has struggled with demand-supply imbalance and low prices for a long time, this development could finally confirm a turnaround for potash producers like PotashCorp and Mosaic (NYSE:MOS).

Why granular potash is a big deal
At first blush, a decision to rescind layoff notices for 50 employees may sound trivial when you recall PotashCorp's original plan to reduce its total workforce by a substantial 18%, as outlined last December. But before I tell you why this news is important, here are some potassium basics to help you understand things better:

The second and third points explain why PotashCorp's decision to continue production at its Penobsquis mine at New Brunswick, which was previously scheduled to be shut down by the end of this year's first quarter, is such a big deal. Encouraged by robust demand for premium-priced granular potash, PotashCorp plans to keep the plant running while it readies another mine at Picadilly, New Brunswick, targeting production startup by the fourth quarter.

What's fueling demand?
PotashCorp's Q2 market analysis report reveals a sharp jump in shipments of granular potash to North America as well as Brazil between January and May this year. The following graphs from the report give you the complete picture. 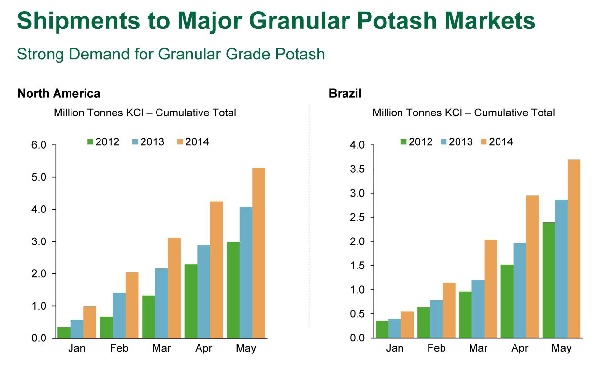 With the primary North American planting season behind, fertilizer companies have their eyes set on Brazil for the rest of the year. In its first-quarter report released yesterday, Russia-based Uralkali, the world's largest potash producer, reported record potash shipments to Brazil, backed by higher soybean acreage and short supply of granular potash.

Comparatively, demand for standard potash, which is more popular in countries like China and India, remained low because of uncertainties in the global potash market and country-specific policy programs. Shipments for 2014 may be slightly higher than last year, as the following graph shows, but PotashCorp believes they're still below potential. 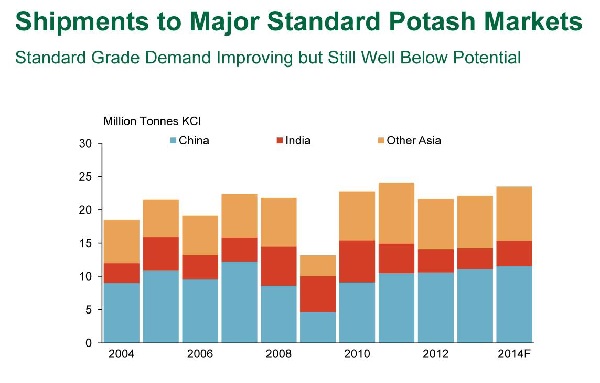 Firm demand for granular potash could mean a strong second half for the fertilizer industry. As I mentioned earlier, fertilizer companies largely depend on Brazil for sales in the second half of the year, and it's primarily a granular market.

While most of the recent contracts to Brazil were booked at around $350 per tonne, a good portion of Canpotex's shipments to Latin America between April and June were transacted at $360 a tonne, according to an Argus Media report (link opens a PDF). Canpotex is the potash marketing group with PotashCorp, Agrium, and Mosaic as its members. Prevailing tight market conditions could boost granular potash prices further, helping these companies make up for some of the lower demand from other international markets.

Yes, the worst is over
It's true that potash companies' fortunes still depend largely on China and India, but a pickup in demand from other markets should quicken their pace of recovery. Perhaps PotashCorp summed up the situation best during the BMO Capital Markets Farm to Market Conference held last month, when it mentionedhow the granular market is "the first market" that leads potash companies "out of a softer marketplace." In other words, the worst may finally be over for potash companies.