Bank of America (NYSE:BAC), Citigroup (NYSE:C) and Wells Fargo (NYSE:WFC) are remarkably similar in many ways, but there is one terrifying reality about the business of Citigroup that has cost investors billions.

And it could continue in coming years.

The scary reality
Although it isn't the most interesting number in the world, one of the essential things to monitor at banks is the progression of the provision for credit losses. This is an expense a bank recognizes on its income statement which estimates what a bank expects to lose from the loans it has issued. And it's subtracted straight of the possible profit a bank can earn.

Bank of America and Wells Fargo have watched their provision for credit losses plummet since the start of 2013, but the same cannot be said of Citigroup: 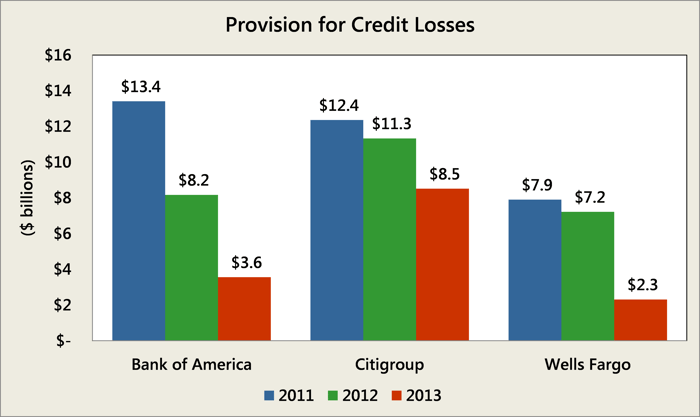 And that is to say nothing of the fact that since 2011 Citigroup has expected to lose nearly twice as much as Wells Fargo, with $34.2 billion in total at Citigroup compared to $17.8 billion at Wells Fargo.

But there doesn't seem to be any end in sight.

Diving into the details
Citigroup, unlike Wells Fargo and Bank of America, has a massive presence outside of the United States. Its consumer banking business had nearly $300 billion of loans issued, and there was a nearly 50/50 split between those found in North America and those issued internationally.

As a result, a glance into its provision for credit losses by its major geographic locations reveals a sobering reality: 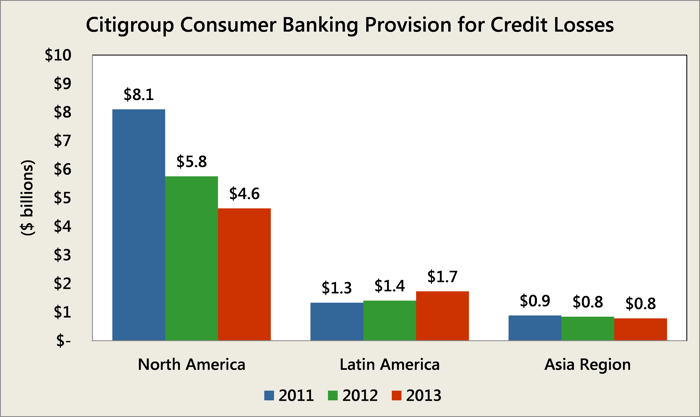 While the bottom line number isn't as significant, the strong improvement from its operations in North America was partially offset by increased losses from its Latin American arm. And when you consider each regions net credit losses over its total loans through the years, the number is even more revealing: 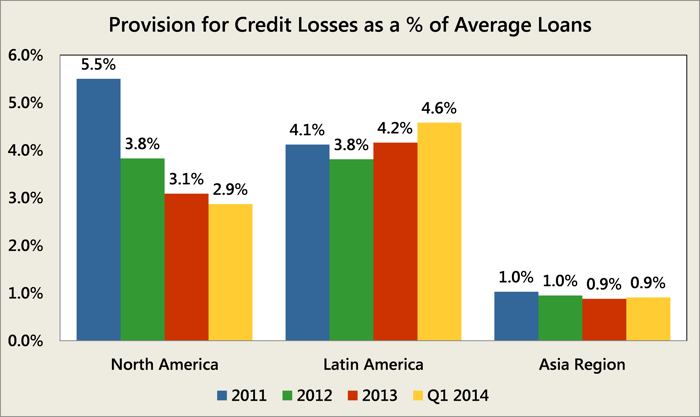 Part of the reason for the increase in the Latin America region was that it issued more loans there. But as you can see, things are only worsening from the region that had more than $42 billion worth of loans issued by Citigroup.

The key takeaway
Undoubtedly, there is reason to be bullish on Citigroup, with the main consideration for its upside coming from a valuation perspective. Yet one of the principal concerns is its global reach, as displayed above.

Banks are cyclical businesses that do well when the broader economies in which they find themselves are doing well. And in the case of Citigroup, seemingly in order for it to be met with success, the economy of the entire planet must be thriving.

While it's possible there will be years in which that happens, one has to think -- if history has anything to tell us -- there will always be times in which one region is booming and the other is busting, which may mean Citigroup will always be caught in the middle.