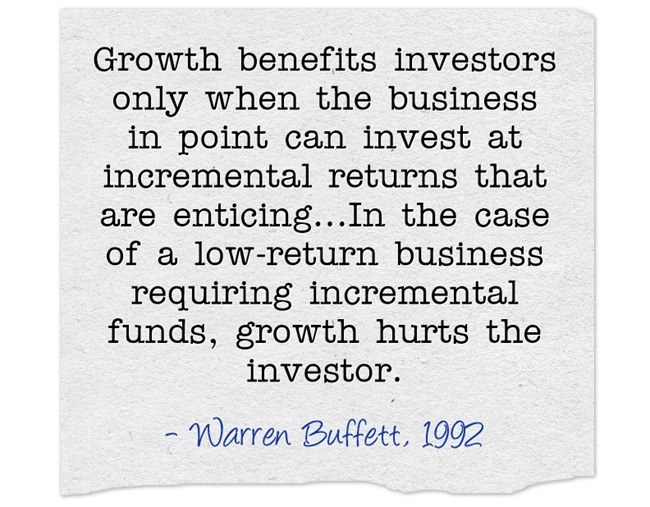 In the eyes of most investors, the concept of growth seems like an undeniably good thing. If the economy is growing, for example, that bodes well for company earnings. And if earnings are growing, that would likely lead to bigger, juicier dividends and, consequently, happier shareholders.

However, growth's not always a panacea, at least not from the perspective of the legendary investor Warren Buffett. For growth to benefit a business, Buffett believes it must be evaluated in a wider context. As he points out in the quote above, growth can be detrimental to companies – and thereby investors – if it fails to boost the bottom line as well.

To fully digest Buffett's thoughts on expanding a business, let's apply his framework to one of the largest acquisitions (a means to achieve growth) in recent history: General Electric's (NYSE:GE) $16.9 billion bid for France's industrial giant Alstom.

Here's a look at how "The Oracle" – a GE shareholder through Berkshire Hathaway (NYSE:BRK-A) – might feel about "The General's" latest megamerger.

GE's power grab
Since the financial crisis sidelined its banking business, GE had been searching for ways to reignite revenue growth. Meanwhile, across the pond, France's Alstom found itself in a similar predicament, but with even less momentum due to a stagnant European economy.

After management evaluated the situation at both companies, a light bulb went on at GE: With its war chest of $57 billion in cash, the American industrial giant could simply handpick the power assets from its French counterpart, providing liquidity for Alstom and bolstering its own growth prospects abroad.

In theory, it sounded like a win-win scenario for both parties. What really mattered, however, was whether it made sense for GE from a financial perspective – where the rubber meets the road. And that's where Buffett's insight into acquiring growth comes in handy.

Counting dollars and sense
For starters, let's take a look at the offer proposed for Alstom's power and grid business. Then we'll consider whether or not the deal can generate incrementally higher returns for GE, as Buffett would undoubtedly require.

As of June 23, GE's offer amounted to a sum of $13.5 billion, net of Alstom's cash. That's a hefty price tag, but what matters to GE is what it gets in return. To evaluate the exchange, we should examine whether the purchase of Alstom will be accretive to GE's earnings.

The term "accretive" might sound foreign at first, but it simply means that a dollar invested in combining these operations will generate more than a dollar for shareholders in the future. Buffett is known to paraphrase this concept using Aesop's famous fable quote, "A bird in the hand is worth two in the bush." The key, Bufett points out, is to "only look at the bushes you like and identify how long it will take to get [the birds] out."

With Alstom, GE predicted that the "birds" were squarely within its reach. The deal, in other words, would add value for investors immediately, not at some point in the distant future. GE estimated that its earnings per share (EPS) would be enhanced according to the following timeline:

By this measure, the purchase clears an important hurdle: In just over a year, Alston's assets would be producing an additional earnings "bump" of three to five pennies for the combined entity. That "bump" is what investors call an incremental return on investment. Without this excess return, the revenue added by Alstom would create zero value for shareholders, absent of synergies (more on that later).

Value, today and tomorrow
An easy way to think about this is to compare the price that GE is paying for Alstom's earnings to the price-to-earnings (PE) ratio for GE itself. If Alstom's PE is lower than GE's, the deal will boost EPS in the near-term with little to no dilution. The reverse is true if Alstom's P/E exceeded GE's.

Now, GE can't justify its purchase on the short-term EPS bump alone. A host of other factors should be taken into consideration, one of which is whether Alstom's assets will continue to generate healthy returns. GE's CFO Jeff Bornstein ran some numbers, and he thinks they can:

The transaction is very attractive to us financially, with a high-teens IRR, well in excess of cost of capital. We expect to achieve our hurdle rate in year three. The valuation is built on modest revenue growth, conservative working capital assumptions, and cost synergies that we believe are highly achievable.

Once again, the returns in excess of capital are what would catch Buffett's eye. Revenue growth is only secondarily important, and so-called "synergies" would be merely icing on the cake. Of course, its true that complex deals imply that other factors are involved, including financing strategies, opportunity costs, and hypothetical synergies, but for our purposes we're focusing on what would matter most to Mr. Buffett.

Why Buffet might love it
As the Oracle of Omaha frequently laments, managers can be tempted to chase growth in a manner that ultimately shortchanges shareholders. Great managers of capital, however, recognize that revenue growth needs to be balanced with healthy returns from an earnings – or cash flows – perspective.

In this particular example, the transaction was highly publicized, and nearly all of the moving parts have been presented to shareholders. Acquisitions like this happen infrequently, though, and it's the day-to-day internal investment opportunities that require most of management's attention. As you would expect, investors are rarely – if ever – privy to the decision-making process in those situations, yet it's just as critical that management evaluates their merit in the same way: Will they generate profits that exceed the company's cost of capital?

The old adage, "Revenue is vanity; profits are sanity; cash is reality" holds true here as always. At first glance, Buffett would probably look at the estimated $20 billion revenue impact from Alstom as pure vanity. But given the fact that there's upside to the bottom line, it's likely he'd approve of this manufacturing megamerger.