An unexpected jump in the CPI could mean that the Fed may have to begin hiking interest rates sooner than expected. That can hurt high-yielding income stocks like master limited partnerships, or MLPs, especially those with very high debt. 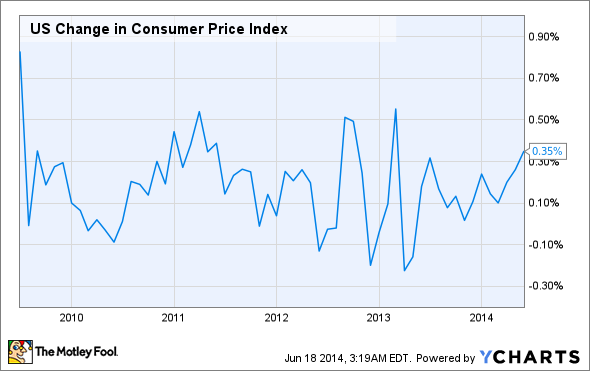 US Change in Consumer Price Index data by YCharts

According to the U.S. Labor Department, consumer prices increased by 0.4% in May, their largest gain in over a year. Economists had expected the monthly CPI increase to come in at half that rate. A Reuters report quoted Michael Feroli, an economist at JPMorgan, as saying, "At the margin, today's inflation print further tilts the odds toward an earlier first rate hike relative to our current fourth quarter of 2015 call."

Rising interest rates could spell trouble
MLPs provide high current yield and certain tax advantages for investors, and under the tax rules must distribute most of their cash flow to unitholders. That means that, in order for an MLP to grow, it must raise funds externally from the capital markets; either by issuing new units or by borrowing money.

A rise in interest rates can hurt MLPs in a variety of ways. First, as the yields on other investments become more attractive, unitholders may be lured away. A more serious effect is higher borrowing costs, which can impact earnings. Even if the company decides to decrease its borrowing activity, it must make up the capital funding shortfall by either foregoing growth or by issuing new units, diluting the distributions to unitholders. So a rising interest rate environment leads to nothing but hard choices for the MLP world.

Companies like Seadrill and its affiliated companies Seadrill Partners (OTC:SDLP.F) and North Atlantic Drilling (NYSE: NADL) could face these choices eventually. As shown in the table below, both of Seadrill's partnerships are carrying heavy debt loads. Seadrill is in a very capital-intensive business. Seadrill Partners for example, owns, operates, and acquires offshore drilling rigs, which are under long-term contracts with major oil companies.

In better shape, but still highly leveraged is Energy Transfer Equity (NYSE:ET), which owns the GP of Energy Transfer Partners (NYSE:ETP), the operator of about 43,000 miles of oil and gas pipeline.

The drilling rigs and pipeline networks operated by such companies don't come cheap, and in the recent environment of low interest rates and high oil demand, high leverage can make a lot of sense. But when rates inevitably start to rise, the situation changes on a number of fronts. Higher interest rates eventually stifle economic activity, lowering the demand for oil and gas. Companies like Seadrill and Energy Transfer may find revenues dropping and may have to service their existing debt via the capital markets. The choice is then between continued borrowing at higher rates or dilution of equity.

Should Fools rush out?
There's no need to panic just yet. The Fed has been worried recently that inflation isn't quite high enough, and this latest CPI report just brings it more in line with their target range. Janet Yellen is no interest rate hawk, so investors should have plenty of warning before the Fed begins to move.

Just keep an eye out for economic reports indicating that the recovery is gaining steam at a faster than expected pace. Watch how highly leveraged MLPs are acting over the coming months. Is a company taking steps to bring down its debt or is it driving on, oblivious to the possible consequences?

In the meantime, enjoy those great current yields and growth stories. We have quite a while before the music stops.