A rising short interest can be a good sign that its time to sell a stock. By the same token, short-sellers are wrong on occasion, leading to large upward movements in share price due to a so-called "short squeeze."

Shares of antiobesity drugmaker Orexigen Therapeutics (NASDAQ: OREX) are up over 8% this year, as the company inches closer to a pivotal regulatory review for its drug Contrave currently slated for Sept. 11. Even so, short-sellers have started to push into the stock with gusto of late, accumulating over 18% of the float at last count. With that in mind, let's consider three reasons why shorts believe Orexigen is ripe for a reversal. 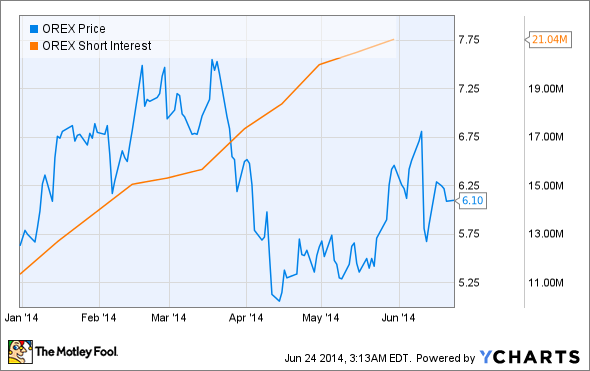 Reason No. 1
Fellow antiobesity drugmakers Arena Pharmaceuticals (NASDAQ:ARNA) and VIVUS (NASDAQ:VVUS) saw their share prices peak around the time of their drugs gained approval from the Food and Drug Administration. Nonetheless, we have seen a steady and hefty decline in each company's share price post approval.

Specifically, Arena shares have dropped approximately 50% from their highs following Belviq's approval as a treatment for chronic obesity, and VIVUS' shares have fallen a whopping 82% since Qsymia's approval. Put simply, I think shorts are betting that history repeats itself in Orexigen's case, if Contrave is approved come September.

Reason No. 2
Contrave's ability to generate enough top line growth to support Orexigen's current market cap of $709 million is questionable. The reason Arena and VIVUS's share prices have cratered is because their drugs have been commercial disappointments. Despite each drug costing $100s of millions to develop and bring to market, we aren't seeing anywhere close to blockbuster-level sales, and the future doesn't look bright for either drug.

What's key to understand is that Orexigen partnered with Takeda Pharmaceutical to market the drug in North America. Per the terms of the agreement, Orexigen is eligible to receive up to $1 billion in potential milestone payments.

In doing so, however, Orexigen gave away the bulk of Contrave's revenues, with the company only in line to receive double-digit royalties on net sales. This issue probably won't matter much if Contrave is able to hit the agreed upon sales milestones required to trigger additional payments, but then again, the obesity space hasn't exactly been the easiest market to launch a new drug into of late. In short, Orexigen may never see the majority of these milestone payments and will have to settle for a fraction of the drug's net sales in a highly competitive (and so far not terribly lucrative, at least for Arena and VIVUS) market.

Reason No. 3
Orexigen shares dropped over 20% two weeks ago when the FDA decided to push back Contrave's PDUFA date by three months. What's interesting is that the agency said that the reason for the delay is because they needed more time to discuss the package insert and post-marketing requirements.  In other words, it certainly sounds like Contrave is solidly on the path to approval.

At the same time, investors need to remember that the drug is currently being evaluated for potential cardiovascular risks in an 8,900 patient study. Although the FDA agreed to review Contrave based on interim results from this study, I think the agency is going to keep a close eye on the drug's safety profile given the turbulent history of obesity medications in general. As such, the FDA will likely put Contrave on a short leash and any hint of an increased risk for heart attack could cause the agency to pull it from the market.

Foolish wrap-up
On paper, the obesity market would appear to be one of the most lucrative drug spaces in existence. Yet doctors have clearly taken a cautious approach with this new generation of medications after getting badly burned by their predecessors. And this battle between market opportunity versus real world sales has led to high levels of volatility among Arena, Orexigen and VIVUS. While Orexigen appears to be closely following in Arena and VIVUS' footsteps from a preapproval trading perspective, you might want to consider the long-term opportunities of investing in this space. And so far, that opportunity hasn't lived up to expectations.