On Thursday, shares of refining companies HollyFrontier (NYSE:HFC) and Marathon Petroleum (NYSE:MPC) kept falling, albeit at a much slower pace than they did on Wednesday. Concerns about whether the opening of the U.S. crude oil market to international exports will cause refiners' profits to drop are reasonable, but Wednesday's action by the U.S. government to open up extremely limited exports of unrefined energy products set off a panic that, in hindsight, appears unjustified, as recoveries by Phillips 66 (NYSE:PSX) and other refining peers suggest.

What happened Wednesday
HollyFrontier sank almost 7%, and Marathon Petroleum fell more than 6% on the day that the negative news came out. Specifically, what caused the panic were reports that the U.S. government slightly loosened its rules governing the export of crude oil, allowing requests from a couple of industry players to export a processed, but technically unrefined, energy product called condensate. Investors reacted so violently, in part, because they've anticipated a wholesale opening of crude oil exports to international buyers for a long time; and based on somewhat misleading headlines from major news organizations, investors assumed that this move from the U.S. government was the one they'd been dreading.

The problem for the industry is simple. For years, HollyFrontier, Marathon Petroleum, and their peers in the refining industry have benefited from the fact that, while they can export fully refined energy products like gasoline at prevailing world-market prices, the U.S.-based oil producers from which they obtain much of their crude-oil feedstock aren't allowed to export their crude beyond the nation's borders. As a result, those producers are essentially trapped within the domestic U.S. market, and that gives refiners bargaining power to offer prices below what foreign buyers would pay if they had direct access to U.S. crude-oil markets. In turn, the resulting price disparities between U.S. and international oil markets boost refiners' profits.

By contrast, opening crude-oil markets to international buyers should theoretically narrow the spreads between the price of U.S. crude oil and its counterpart on the world market. If producers can bypass refiners to get direct exposure to the international market, then HollyFrontier and Marathon Petroleum will have to pay higher prices to get the crude they need to produce gasoline and other refined products, and their margins will therefore plunge.

Overreacting to the situation
Today, though, Phillips 66, and several other refiners, rebounded from their Wednesday losses. At least some analysts now believe that the U.S. government's move to allow exports of condensate don't amount to a dramatic policy shift, emphasizing the more extensive processing that condensate requires in comparison to raw crude oil, and concluding that full-blown crude exports won't be allowed in the near future.

Spreads between West Texas Intermediate and Brent crude seem to confirm that belief among energy-market investors. Today, August oil futures settled at a spread of $7.37 per barrel, down slightly from Wednesday, but still substantially higher than its narrowest levels during the past year: 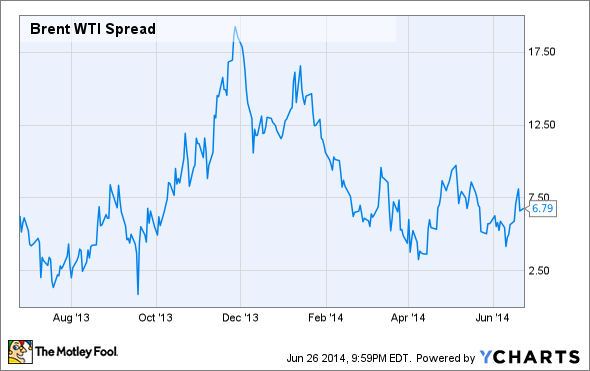 Of course, only time will tell whether the U.S. actually follows through on broadening crude oil exports. For now, though, the huge losses that Marathon Petroleum, HollyFrontier, and other refiners suffered seem overblown and, at least in the short run, now looks like a reasonable time to take a closer look at them as possible investments for your portfolio.