Louie Grint
(LouieGrint)
Author Bio
I am a curious economist who likes to investigate what is behind asset price movements across the globe. My articles range from industry analysis of various sectors to understanding global macro events that could trigger volatility in the markets.

Given that the Argentine government warned it would default on its sovereign debt if it were required to pay in full, major Argentine ADRs took a huge hit. All Argentine bonds dropped at least 10%, and many equities plummeted. Empresa Distribuidora y Comercializadora Norte S.A., also known as Edenor (NYSE:EDN), and YPF S.A. (NYSE:YPF) fell 13% and 17%, respectively, right after the court ruling. What exactly is going on?

A bit of history
In order to understand what's going on, let's go back in time a bit. In late 2001 Argentina defaulted on roughly $100 billion in bonds. At that time, a bunch of hedge funds bought Argentine debt, and a group of them -- led by Elliott Management's Paul Singer -- refused to take a haircut on that debt when Argentina refinanced it in 2005 and 2010. The funds that wouldn't budge became known as "holdouts." And because these bonds were issued under U.S. law, these funds, known in Argentina as buitres (Spanish for "vultures") went to court -- and won.

The country argues that paying these creditors while serving its restructured debt puts its finances in a delicate situation. Why? Although the debt in hands of the holdouts is only $1.33 billion, if Argentina agrees to pay them, then it will have to face a massive number of trials coming from the restructured bondholders. The restructured bonds hold a "rights upon future offers" clause, allowing for new trials if the country gives the holdouts a better offer than the one received by the bondholders that agreed to the bond restructuring. A scenario like this would mean an extra payment of around $15 billion. Considering that Argentina currently holds around $29 billion in central bank reserves, paying everything would put the country in serious risk. There is already strong pressure on the peso, and inflation this year might reach around 35%. As you can see, the outlook is complicated.

What will happen to Argentine ADRs?
Most Argentine assets will experience extreme volatility until there is a clear sign that the country will avoid a new default. For now, Argentine officials are remaining ambivalent about what they will do next, as they are still evaluating different courses of action.

This scenario heavily impacts companies that need large investments, like state-run oil company YPF. In fact, this company was considering issuing another round of bonds in the U.S. in the second half of this year, which for now has been put on the shelf. Let's not forget that at the beginning of April, it managed to issue $1 billion in 10-year bonds at an 8.75% interest rate. YPF is putting a lot of effort into developing the huge Vaca Muerta shale oil and gas formation, and it has managed to obtain not only the necessary funds, but also important deals with other oil companies like Chevron. If the country defaults, getting a similar amount of money at rates below 10% may be impossible. Extracting unconventional oil and gas is complex and costly, so if the company has to face financing restrictions, it will be difficult to foresee higher production in the country.

The situation for Edenor, which is an electricity distributor in the country, is precarious as well. Until last week, this company's stock was showing an impressive performance, soaring from $2 in August of last year to almost $13. 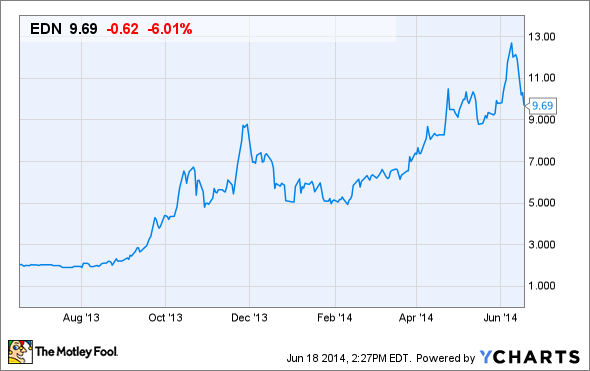 Investors were expecting an increase in domestic electricity prices that would make the company more profitable. Retail prices for household electricity in Argentina are behind international and regional prices, and they will eventually have to be modified. Some small steps have been made in this direction. For example, the government reduced many subsidies that aimed to make electricity bills cheaper for consumers. However, this reduction did not improve Edenor's situation: Users now simply pay for what the government was covering through subsidies.

Currently, Edenor is not in a position to improve the quality of its service -- in fact, it requires significant investments simply to stay running. This became evident in exceptionally hot months of December and January, when electricity demand peaked and the infrastructure collapsed, causing major power outages all around Buenos Aires. Clearly, a default scenario would bring a lot more trouble.

Another ADR to consider is Grupo Financiero Galicia (NASDAQ:GGAL). Holding this company's stock carries risks as well: When there's economic turmoil, the banks are the first to adjust. This bank holds less than 10% of its assets in Argentine bonds, so a default would not significantly affect the bank's financials, but it would certainly cost the bank business, as it has in the past. When Argentina defaulted on its debt in late 2001, banks suffered big-time as citizens flooded these institutions to withdraw funds. It took years for consumers to regain confidence, and people still remember.

Another recent issue is affecting the bank. The Argentine central bank established maximums to the interest rates banks can charge for lending money, forcing Grupo Financiero Galicia to reduce them. The issue here is simple: Given the high inflation that the country is experiencing, the central bank increased its reference rates in an effort to reduce liquidity and lower the pressure on the peso. However, this action generated two consequences: All interest rates went up, and banks preferred to lend money to the central bank on a short-term basis, rather than lending to anyone else. The new interest rates will just reduce profitability to the bank, and if the bank manages to lend more money its exposure to the country's inflation will remain a concern.

Final Foolish thoughts
Although the situation is highly complicated for Argentina, there is still hope. The best way to resolve the whole thing would be to start a new round of negotiations. Basically, the Argentine government would have to meet with the holdouts and the judge to arrange a payment mechanism that would avoid new trials coming from the restructured bondholders.

Domestic politics here will be key. The Argentine government holds these funds responsible for any impending catastrophe and is trying to reach for regional and international support. There is still a window for negotiation, however.

All of the companies mentioned above are victims of this circumstance, as their fundamentals have not really changed. Nevertheless, it would be wise to stay out of these assets until there is a sign of a solution. If Argentina manages to make an agreement, this would clear the path to access the international credit markets and would mean a great buy opportunity, given today's prices.

What Will Happen to These ADRs if Argentina Defaults? @themotleyfool #stocks $YPF $GGAL $EDN Next Article
Current