Taking a look into a few different financial metrics along with comparisons to industry peers such as ConAgra (NYSE:CAG), JM Smucker (NYSE:SJM), and Kellogg (NYSE:K), we can conclude that Flowers Foods is a very well-run company and in a strong position in its market.

Return on equity
Return on equity, or ROE, is an important measure of management's competence in running the business. Measured as net profit divided by total shareholders' equity, ROE tells us how well the company is reinvesting earnings. It is important to look at ROE in conjunction with the company's capitalization; if a company is funded heavily with debt, then ROE may be very high, but it won't show you the financial risk the debt presents. 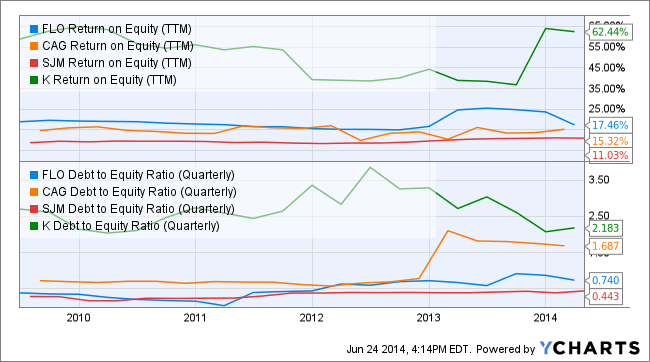 As you can see in the chart, over the last five years Flowers Foods' ROE has been, for the most part, higher than both ConAgra's and Smucker's, telling us that dollars reinvested in the firm by management are earning higher returns.

Kellogg appears to be putting all three to shame; however, on the bottom half of the above chart, you can also see that Kellogg is financed very heavily with debt, having a debt to equity ratio of over 2.1.

Effects of debt
As we said earlier, a high ROE is typically a good thing, but too high could mean a high debt load, and could be cause for alarm. Flowers Foods has a high ROE and a debt to equity ratio of 0.74 as of the end of the last quarter, which isn't too much of a concern. Over the last five fiscal years, Flowers Foods has averaged interest coverage, or operating profit divided by interest expense, of over 17.4.

When the economy is moving in the right direction as it is now, companies typically won't feel the effects of a heavy debt load. However, during the next unexpected economic downturn, such as the one that hit us in 2008, Flowers Foods appears to be much better positioned to weather the storm.

Flowers Foods marketplace advantage
High debt levels aren't uncommon in the packaged food industry as firms seek to grow by acquisition, which is funded by debt many times. Companies are often so concerned to grow the number of brands and the scope of their products that they venture outside of their "bread and butter" and do not always make reasonable acquisitions. This can cause long-term return on equity to decline as a company grows.

Compared with all three of the other companies, Flowers Foods offers products in a relatively narrow scope. The company earned 73% of revenues in 2013 from bread, buns, rolls, and tortillas, then earned another 16% from snack cakes and pastries.

Keeping a narrow scope and investing wisely has helped Flowers Foods grow revenues quickly but also realize the synergies needed to grow income even faster. This can be seen through the company's average revenue growth of 9.2% per year, annually compounded over the last 10 years, as earnings have grown at a blistering 16.3% per year over the same time frame.

A Fool's take on Flowers Foods
Compared to industry peers, Flowers Foods has a high return on equity, and has for several years. If the company can keep up this pace of ROE, investors will be able to collect a dividend that is currently yielding 2.3% as management reinvests other earnings at 15%-20%.

A high and steady ROE along with a low debt to equity ratio proves Flowers Foods' management is committed to only placing funds in high-quality investment opportunities, which will help this company move forward with its outstanding progress. I believe investors will be handsomely rewarded by holding this company for many, many years.