For the past couple of years, interest in exporting natural gas from the U.S. to Europe and Asia has begin gaining momentum. The recent troubles between the Ukraine and Russia have increased interest notably, and investors are starting to take note.

During the next couple of weeks, I'll take a look at several companies that are involved in the export story in order to help investors gain a better understanding of the opportunity and the market. Right off the bat, here are a handful of companies that are involved in the gas export business in some capacity: Chart Industries (NASDAQ:GTLS), Cheniere Energy (NYSEMKT:LNG), GasLog Ldt. (NYSE:GLOG), and Navigator Holdings (NYSE:NVGS).

The equipment guy
This is where Chart Industries comes into play. Chart is actually a pretty diversified business, with a focus on building and maintaining industrial systems for a number of gas processing and cryogenic needs for the biomedical, chemical, food processing, and energy sectors. This diversification offers a lot of upside, as well as -- in theory -- protection from the cyclical nature of many of its customer's industries.

Chart's growth story for the past couple of years has been heavily weighed toward the explosive growth of natural gas, both in North America and in Asia. The company's Chinese business has been growing like gangbusters during the past year-and-a-half, and the domestic business for natural gas liquefaction has just begun picking up steam. Additionally, Chart Industries also makes LNG fuel tanks and systems for heavy trucks, and is the largest supplier in North America to this burgeoning market.

However, a combination of slower-than-anticipated domestic adoption of natural gas as a trucking fuel, lackluster performance of its Biomedical business -- plus a terrible first quarter that included weather-forced shutdowns at several facilities -- add up to a stock that's been hammered since last October: 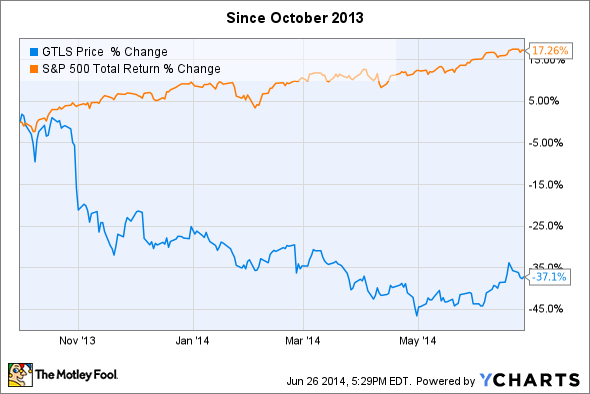 While Chart Industries' stock has underperformed the market by 54% since then, the business remains remarkably strong. As a leader in liquefaction technology, it's in a very strong position to benefit from the acceleration of natural gas exports as a key supplier of equipment.

Financially, Chart is in great shape. The company carries only $260 million in debt and more than $140 million in cash on its balance sheet. From a valuation perspective, its trailing price-to-earnings, or P/E, ratio of 33 and forward P/E ratio of 26, are both reasonable for the company based on recent averages, and for a company with its growth potential.

Cheniere Energy has gotten a lot of attention during the past several years as it has continued work on its Sabine Pass export facility in Louisiana. Once completed, this facility will be able to process 3Bcf/d (billion cubic feet per day) of natural gas. For context, that would be equivalent to about 4% of the U.S. daily natural gas production in 2013.

The Sabine Pass facility will be the largest and first of its scale in the U.S. when completed, and is on track to begin operation in late 2015, but this will only be for two of the planned six total liquefaction trains. It will be 2018 or later before all six trains are complete, so the immediate impact on demand will likely be something along the lines of less than one Bcf/d of natural gas, meaning less than a 1% increase in demand for natural gas production.

In the interim, Cheniere Energy has signed a number of long-term contracts to supply LNG; but as yet, the company's direct revenue is minimal, with only around $70 million in revenue each quarter. This will remain the case until the Sabine Pass facility begins operations in about 16 months or so.

Cheniere's balance sheet shows how much of a leveraged bet the company is making, with more than $6.5 billion in debt, and mostly at interest rates above 5.625%. The first of its notes comes due in 2016, and I'm reasonably sure that the company will have little problem either renegotiating at a better interest rate, or paying the note off by then. However, it's worth noting that the company's limited partners, Cheniere Partners Holdings and Cheniere Energy Partners, L.P. (NYSEMKT:CQP), will have limited ability to pay distributions based on certain criteria in the company's secured debt instruments.

The shippers
GasLog and Navigator Holdings have both seen their stocks rocket since their IPOs: 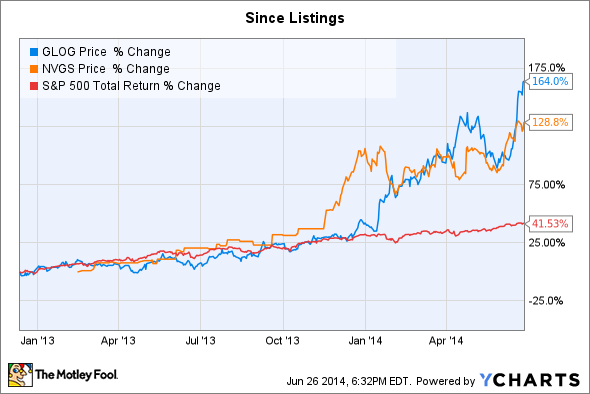 Navigator Gas is the larger of the two, with a relatively new fleet of 24 ships in the water generating some $266 million in annual sales, and four more under construction. Navigator carries much less debt -- $575 million -- compared to GasLog's $1.17 billion. Of these two, only GasLog actually transports LNG, while Navigator Holdings transports petrochemical products, ammonia (largely used in fertilizers), and LPG (liquid petroleum gas), which is mainly propane and butane, which are byproducts of natural gas/oil production and crude oil refining.

GasLog is a "pure play" LNG shipper, with 22 ships -- nine of which are on order and will be delivered in 2015 or later. This corresponds to Cheniere Energy's facility coming on line. GasLog has further interest in another nine ships, either as technical manager, or through its GasLog Partners, L.P Master Limited Partnership.

Final thoughts: Where to invest?
These are just a handful of the companies that have some exposure to gas exports, that you might want to take a closer look at. Of these, GasLog and Cheniere Energy seem to have the most speculation already baked in, considering the run-up their stocks have seen, and the fact that the results of their efforts won't start showing up until early 2016, when exports have been happening for at least a few months.

Navigator Holdings may not be a pure-play in LNG exports, but the growth in natural gas demand will mean increased opportunity for it to export the byproducts like LPG, and the growth of natural gas-based manufacturing of materials like ammonia to overseas fertilizer manufacturers. It carries less debt, and is already benefiting from domestic oil and gas production.

Chart Industries seems to be the real winner of the four, especially with the beaten down stock price. Just about any way you slice it, the growth in exports and demand of natural gas and its byproducts will create greater need for Chart's gas processing and cryogenic systems. Toss in solid management and a pristine balance sheet, and it's a great company to look closely at. However, this article is just a starting point. I'd suggest you do a little more research before making a final decision.