The World Cup is under way, and in the spirit of competition, here is a match-up that pitches Coca-Cola (NYSE:KO) against Anheuser-Busch (NYSE:BUD). While fans are busy watching their favorite teams, they are consuming tons of Coca Cola and Anheuser-Busch products. Which of these two beverage companies is an investing win for this summer and beyond?

Two beverages, which will quench your investing thirst?
The World Cup should attract more viewers than any other television event in the world. The final match this year will likely best even the 2006 World Cup final match record of over 700 million fans. Meanwhile, thirsty viewers are getting bombarded with advertisements from companies like Coca-Cola and Budweiser.

There are two main kinds of World Cup advertising companies. World Cup partners, such as Coca-Cola, reportedly pay around $25-50 million per year for the exclusive privileges of "partnering" with FIFA, the international football governing body that runs the World Cup. Then there are World Cup sponsors, such as Anheuser-Busch Inbev and its main brand Budweiser, which pay a lesser amount of $10-25 million for the publicity that comes from helping to sponsor the event.

However, don't be fooled that Coca-Cola's more prime title with FIFA makes it sure to gain more from its advertising investment. For one thing, the added cost will mean that Coke has more to sell to break even on this marketing investment. Second, Budweiser has one very special advantage in this World Cup event: it's the only beer sold at the World Cup games.

So, which team is the best play?

Team one: Coca-Cola
Coca-Cola is one of the largest and most recognized World Cup partners. This brand awareness has grown over decades of such partnerships. Thanks to Coca-Cola's giant investment, the Coke logo will be front and center for much of the televised time. The company will share this with seven other partners that will spend, collectively, $600 million on Brazilian TV ads during the month-long tournament.

Coca-Cola certainly knows a thing or two about great advertising and brand awareness, and it is one of the facets that has made Warren Buffett so happy with the company. Coca-Cola's presence in this year's World Cup is no different. The company has recorded 32 different versions of this year's theme song "The World Is Ours" to play the advertisement around the world in 85% of its markets. This advertising expense will hopefully translate into rising revenue for the company during the second half of the year, lifting profit after this large investment lowered it for the first half of the year. 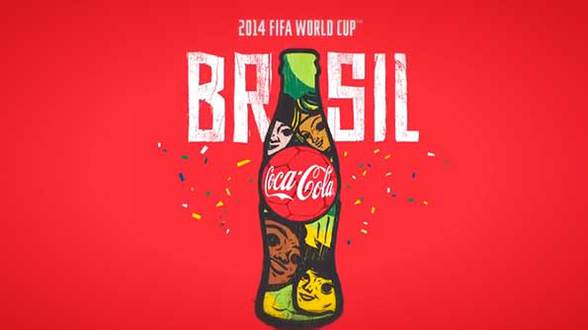 Investors have rewarded this slightly with a short run up of over 6% before the games began this year. However, Coca-Cola might still be a good play now. Shares of Coca-Cola have underperformed in the last year, lagging the S&P 500 by over 21%. While the company did report lower revenue in 2013 than it did in 2012, many US investors are worried about the worldwide trend of declining soda consumption.

However this less-than stellar last year could present a perfect opportunity for long-term investors ready to jump in at relatively favorable prices. Right now, potential investors are looking at a very well-run company with great brand awareness, a very diversified revenue base outside of regular soda drinks, and which is very geographically savvy. For investors who believe Coca-Cola will turn this around, this may be a great opportunity. The company is still selling at a slight premium to the market with a P/E of 21, compared to the market average of 18, so for value investors looking to find a stock at a cheaper price, let's check out team two.

The competition: Anheuser-Busch InBev
Budweiser might be the beer of the American football Super Bowl, with Budweiser a classic American name. However, the company started a major global push in 2008 by combining with Inbev and is now a globally dominant beer brand with many more drinks than Bud, which includes a majority stake in Brazilian local favorite Brahma.

The combined company controls roughly 69 percent of the Brazilian beer market already. The company is becoming the brand of the World Cup as well. Budweiser beer has been the "official beer" of every World Cup since 1986 and is contracted to be so through 2022.

For this year's World Cup, it has opened the "Budweiser Hotel" on Rio de Janeiro's Copacabana beach, and continues to promote itself in other smart ways. But more important than its marketing efforts is how the company is gaining sales from the World Cup games. Hopefully fans in the stadiums like Budweiser, as it is the only beer that will be sold at World Cup stadiums this year, thanks to a restrictive clause in the sponsorship agreement between FIFA and A-B InBev.

Beer sales at the World Cup will probably provide a very good boost for Anheuser-Busch Inbev this summer, but what about the stock? The company reported a positive first quarter this year with rising revenue and strong growth in international brand awareness. Unfortunately, the company saw a decline in profit.

This was slightly prompted by lowered market share in the U.S. as sales to retailers here were down 1.4% in the fourth quarter and 2.9% for full-year 2013, prompted by the growth of craft brews. The company estimated that it lost 50 basis points of total U.S. market share in 2013. It now owns an estimated 47% of the U.S. beer market. While 47% is still very high, the U.S. is the company's largest market and a slight decline here could significantly drop its profit. However, the strong international growth the company is showing might be an investing catalyst for investors seeking long-term value.

At a current P/E of 14, Anheuser-Busch is cheaper than both Coca-Cola and the market. Another score for A-B Inbev over Coca-Cola is a 3.6% dividend yield which exceeds that of Coke at 3%.

Budweiser's sponsorship includes a "man of the match" award. The winner of this match is Budweiser. Photo: FIFA