Playwright William Congreve correctly noted, "Heaven has no rage like love to hatred turned, nor hell a fury like a woman scorned," but not all love affairs gone south result in wreaking vengeance. Indeed, some can even end gracefully.

Pinnacle Foods (NYSE:PF) was ready to walk down the aisle with Hillshire Brands (NYSE: HSH) in a $4.3 billion merger of packaged foods makers. However, it was abruptly left at the altar when its soulmate was wooed away by Tyson Foods (NYSE:TSN), which, after its own love triangle involving Pilgrim's Pride (NASDAQ:PPC), convinced Hillshire to accept a $7.7 billion buyout offer (a price tag like that really doesn't take much arm-twisting).

Although Pinnacle was still entitled to a $163 million dowry from Hillshire for backing out of the nuptials, it had the option of forcing a shareholder vote on the matter, which would have been messy and could have delayed Hillshire's union with Tyson, but would have enabled Pinnacle to negotiate an even larger termination fee. A spiteful ex-partner might have done so, but instead Pinnacle graciously accepted the payout as is. With the money in the bank, it's now free to look for another eligible bachelor.

But that might not be as easy as it sounds. The Hillshire offer was a bit of an odd pairing in itself, despite Hillshire CEO Sean Connolly noting that "meats go with vegetables, sandwiches go with pickles." True, but the Tyson (or Pilgrim's, for that matter) offer for Hillshire makes even more sense as they're complementary businesses. Mashing up food concepts isn't always a hit menu item.

Pinnacle sits atop the food chain, at least when it comes to frozen vegetables, as its Birds Eye brand owns a quarter of that market and another 25% when it comes to complete bagged meals. Even more impressive, Pinnacle's Lender's brand commands a 60% share of the frozen bagel market. 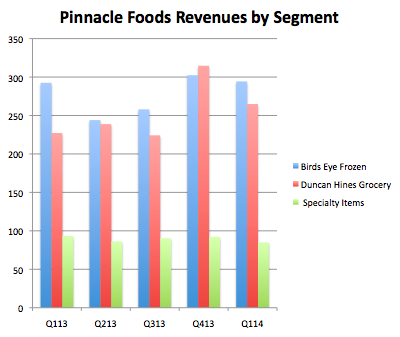 It will be difficult therefore for one of its industry rivals to step up with enough cash to make an offer. Treehouse Foods is close in size to Pinnacle, but it's a private-label food maker and pretty much just took itself out of the running by agreeing to acquire Flagstone Foods for $860 million. B&G Foods might find Pinnacle's Wish-Bone salad dressing, Vlasic pickles, and Hungry-Man frozen dinners to be complementary to its own portfolio that includes popular names like Cream of Wheat, Mrs. Dash, and Baker's Joy. However, at half the size of its peer, B&G might find the debt load heavy if it had to finance a takeover.

This suggests an offering would have to come from outside Pinnacle's main competitive circle, but as mentioned before, even Hillshire's bid was a head-scratcher. Pinnacle investors certainly weren't enamored with the bid, as they dropped its stock on the announcement. Others would likely find another pairing similarly disconcerting.

So Pinnacle Foods is left on its own again, which isn't necessarily a bad thing. Recent acquisition Wish-Bone contributed most of the company's growth in the first quarter. Management reaffirmed its adjusted earnings guidance for fiscal 2014 in the range of $1.70 to $1.75 per share, representing growth of 12% to 15% from the year-ago period.

Sometimes the single life is preferable, particularly when you've got a little extra mad money in the bank.