Please ensure Javascript is enabled for purposes of website accessibility
Free Article Join Over 1 Million Premium Members And Get More In-Depth Stock Guidance and Research
By ICRA Online - Jul 2, 2014 at 9:44AM

Growth prospects in aerospace opens immense opportunity for the aviation arm of General Electric, and the company is well prepared.

GE Aviation, an operating division of General Electric ( GE 0.75% ), is one of the world's top aircraft engine manufacturers providing related maintenance, repair, and overhaul services. It's slowly becoming a critical component of the company's global industrial portfolio and a trustworthy revenue generator. Demand for better engines and fuel efficient technology is driving GE Aviation's growth, creating huge prospects for the engine maker. Here's how GE plans to grab the opportunity.

Important revenue generator
Aviation remains one of General Electric's areas of strength that has been a key growth driver for the company's industrial segment. Revenue passenger kilometer went up 6.9% globally through February as passenger traffic is seeing solid growth in Asia, China, Europe, and the Middle East. As a result, demand for aircraft is strong -- quite visible in GE Aviation's backlog. It recorded a commercial backlog worth $21 billion in the quarter ended March, up by a staggering 68% over last year.

GE aviation has shown impressive results in the past quarter, where revenue grew 14% to $5.8 billion on account of higher shipment volumes and strong order pricing. The division accounted for around 15% of General Electric's consolidated sales, with the proportion rising continuously in the past few years. 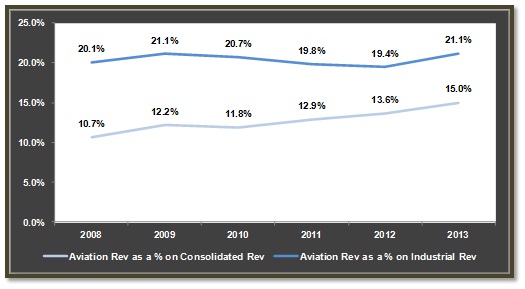 Making progress
Bill Fitzgerald of GE commercial aviation said that currently, there are 33,900 GE engines in use, and that number is expected to go up by 50% through 2020. Every second moment, a GE powered jet takes off, and at any point in time, there are as many as 300,000 people boarded on 2,200 planes enjoying their flight run by GE technology.

In the last seven years, the division has opened up seven aviation facilities and modernized its existing plants. Significant investments include the Lafayette, Indiana, 225,000-square-foot manufacturing facility where CFM International (GE and Snecma joint venture) would assemble the LEAP engine. Another of its major facilities in North Carolina would soon become the world's first facility to produce advanced CMC engine components in large numbers.

GE has been the key engine supplier for narrow-body jets to both Boeing and Airbus, and it competes with Pratt & Whitney, a division of United Technologies ( RTX 1.75% ), and Rolls Royce. Pratt is making steady progress to build the next-generation engines using advanced technology such as automated manufacturing, additive technology, and fresh inspection method. Its PurePower engine claims lesser fuel burn, environmental emission, engine noise, and operating cost. The company aims to lower airplane fuel consumption by at least 15%.

GE also promises similar fuel savings with its own next-generation products. Its GEnx engine used for long-range aircraft such as Boeing 787 and 747-8, uses advanced material and cost-effective technology that cuts down on weight and enhances operating performance while being low on maintenance cost. The company has plans to build an advanced manufacturing work facility and introduce 3-D printing technology. The plant would feature the latest technology, including additive manufacturing and automated welding.

The opportunity ahead
Aerospace research firm Teal Group predicts aircraft engine sales to touch a record high of $500 billion over the next 10 years. This suggests that exciting times are ahead for the engine manufacturers. According to Boeing's market outlook for 2013-2032, world passenger traffic should increase at a healthy rate of 5% over the next two decades -- triggering demand for 35,280 aircraft, of which more than 40% would be for replacing retiring planes. The remaining orders would be stimulated from the growing need to expand fleet, most of which would come from emerging markets, where people are increasingly taking to the skies.

This wave of growth is attributable to the rise in passenger traffic and the need to build efficient fleets with lower carbon emission and better fuel economy, which would ultimately save on operating costs. GE stands to make handsome gains as it's known to "power the world's fleets."

GE's strong network of service partners assures solid global footprint, giving it a much required edge. The change in the aviation trend in the past decade, where customers prefer getting in touch with individual suppliers for service solutions instead of approaching the aircraft maker, brings huge opportunity to the engine maker. GE's broad network and connections with more than 400 service customers, 250 field service customers, and around 450 customer support staff give it great advantage in capturing market share.

Foolish last word
GE Aviation's quality of service and scale of operations puts it in a strong market position. Its global network of suppliers is unrivaled by its peers, and its groundbreaking technology is creating a huge demand for its products. With the rebound in commercial aviation, the division could grow significantly over the coming years.