One of the biggest stories in the news over the past few weeks has been the escalation of violence in the war-torn nation of Iraq as Islamist militants are fighting to take control of the country from the current U.S.-backed government. Investors should be paying close attention to the developments of this crisis. This is because, in addition to being a humanitarian crisis, many oil and gas companies have significant operations in the country. In this article, we will discuss one such company, ExxonMobil (NYSE:XOM).

Iraq offers huge reserves and profitability
Iraq has the third largest conventional oil reserves on the planet, after Saudi Arabia and Iran. According to the Energy Information Administration, Iraq's proven oil reserves totaled 140.3 billion barrels at the beginning of 2014. These are also conventional oil deposits. This oil is much cheaper to extract from the ground than unconventional sources such as the shale oil in the United States or the heavy oil sands crude in Canada.

In fact, by some estimates, it is exponentially cheaper. For example, data on the costs of extracting one barrel of oil in Saudi Arabia is hard to come by because such data is guarded by the Kingdom, but some analysts believe that it is as low as $2 per barrel. Presumably, the costs of extracting Iraq's conventional oil would be similar given the countries' similar geologies. Meanwhile, it costs between $55 and $70 per barrel to produce in the Bakken shale. These lower production costs mean that operating in Iraq is much more profitable for the oil company.

Undeveloped conventional deposits
Iraq may also be the last remaining good source of such oil. This is largely due to the war that was going on in the country over the past decade. As already mentioned, Saudi Arabia and Iran are the only two countries that have larger reserves of conventional crude oil, and both countries have already heavily developed their respective oil fields. Other countries with large conventional reserves, such as Nigeria, have also largely developed their fields. Iraq's oil deposits were once largely developed but the war and subsequent unrest in the country resulted in much of the nation's oil-producing infrastructure being either shut down or destroyed.

This is where oil companies like ExxonMobil come in. With the massive Iraqi oil fields largely rendered inactive due to the war and the country in desperate need of investment, the Iraqi government has begun auctioning off the rigs to develop its oil fields to western oil companies, typically with the Iraqi state-controlled oil company having a stake in the developed field. 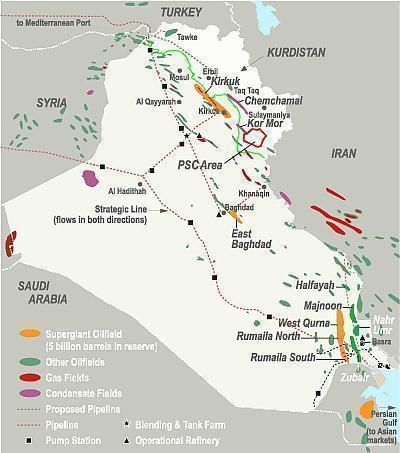 West Qurna-1 is part of the giant West Qurna oil field in Iraq. The entire field is one of the largest in the world, believed to contain approximately 43 billion barrels of recoverable oil. However, West Qurna-1 only contains approximately nine billion barrels of recoverable oil. Even so, this has the potential to be a very profitable project for ExxonMobil as the company intends to increase the field's production from 270,000 barrels per day in 2009 to 2.25 million barrels per day by the end of 2016. To accomplish this, the company and its partners Royal Dutch Shell (NYSE:RDS.A) and South Oil Company will need to invest approximately $50 billion into developing the field over the seven-year period. It does appear that ExxonMobil will be the largest beneficiary of the development of this field as it owns 60% of it.

ISIS threatening development
However, now that the project is roughly halfway through its development, the promising project has been threatened by forces from ISIS, an Islamic militant group that seeks to turn Iraq into an Islamic state. The rise in violence caused by this group has forced ExxonMobil to evacuate approximately 20% of its staff away from the West Qurna project and out of the country. This is a move which almost certainly threatens the company's ability to complete the project within its scheduled seven-year timeframe, particularly if the fighting continues for a long period of time.

Militants not nearby
However, West Qurna itself is not currently threatened by the unfolding situation. This is because ISIS has focused its attacks on cities and settlements in the north and central parts of Iraq while the oil field is located in the south. 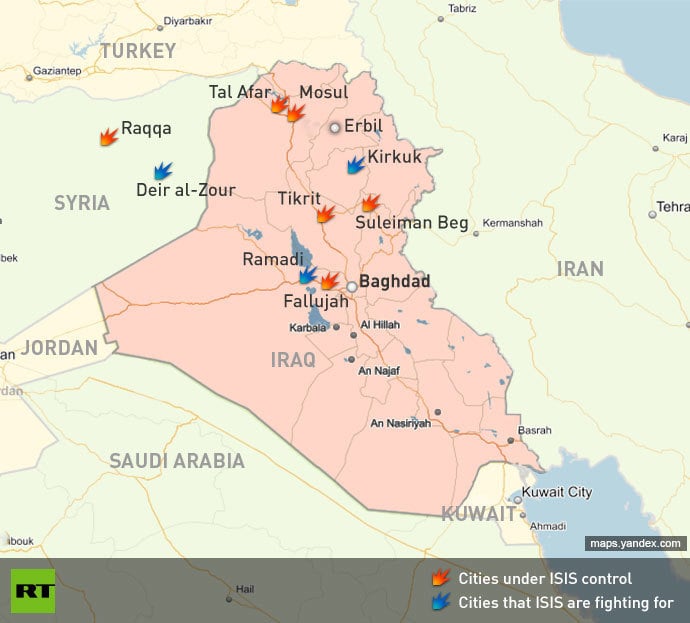 This distance between the oil fields and the violence is the reason that Russia's Lukoil and Norway's Statoil (NYSE:EQNR), which are jointly developing the immediately adjacent West Qurna-2 project, have not evacuated like ExxonMobil did.

Foolish takeaways
Fortunately, ExxonMobil has not been forced to shut down its field in Iraq, so the company is continuing to produce and sell oil from the field. However, it is not producing at its full planned capacity of 2.25 million barrels of oil per day. Presumably, ExxonMobil will have a difficult time expanding its production further without the staff that were evacuated. However, none of the company's company's current production appears to be threatened by the violence in the country.