Caterpillar (NYSE:CAT), the world's largest maker of construction and mining equipment, is in a tough spot as it faces persistent weakness in its mining business and sluggish sales in big markets like Europe. Europe and related regions accounts for nearly a quarter of the company's global sales. Though Cat felt positive tremors in its European construction business in the first quarter as its dealers built inventory for the year, there are still plenty of uncertainties. In Cat's (link opens a PDF) own words, "The Euro zone economy is recovering, but is far from healthy." What's the latest update from the continent, and what's Cat thinking? Let's find out.

Economic turmoil in Europe
Bloomberg analysts expect the European GDP to grow by 1% this year. While the positive GDP growth is much welcome, the sluggish pace is unlikely to stimulate machinery demand in the region. Mining remains depressed as mining companies postpone capital spending and focus on generating more efficiency from their existing infrastructures. A few days back, Cat told Bloomberg that its dealer sales in the resource industries (mining) segment were down 47% in Africa, Europe, and the Middle East in the most recent period.

To aggravate the situation further, the geopolitical events in Russia and Ukraine have acted as additional headwinds to construction equipment demand. Construction companies vary in their sales outlooks for the year; according to data compiled by Bloomberg, sales forecast vary from 8% decline to 10% growth, which only reveals the amount of economic uncertainty prevailing in the region. 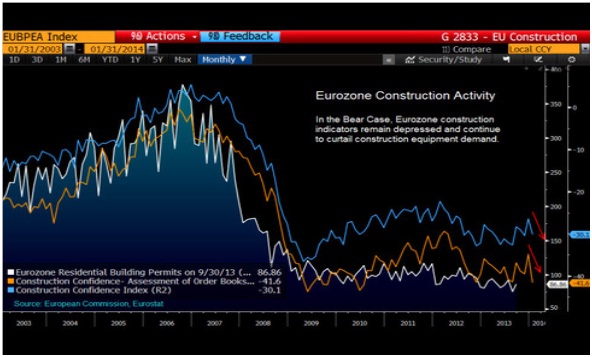 Management's tone
Caterpillar saw positive growth in Europe in the first quarter as customers are slowly warming up to some machine replacements. This bodes well for the company as the bulk of its sales in the continent comes from the replacement of worn-out machinery instead of an increase in its installed base. Cat is banking on three things to boost its sales over the coming quarters: business confidence, some improvement in construction activities, and supportive interest rates.

Management is fully aware of the risks and uncertainties that continue to prevail in the region, however. In its first-quarter earnings press release, the company said, "The unwillingness of the European Central Bank to take more aggressive actions risks leaving the economy struggling for years. Continued weak growth would make it difficult for businesses to maintain existing operations, let alone make new investments."

Adaptive strategies
Like all equipment makers, Cat is looking at ways to counter the weak sales and rising production costs of tier 3 and tier 4 machineries in Europe. The company has around 36 manufacturing facilities in the European Union and it's looking at ways to boost efficiencies. Its biggest project is the ongoing restructuring in the Gosselies factory in Belgium, which is one of Cat's largest manufacturing facilities in Europe. The plant rolls out excavators, loaders, engines, and components.

Last year, Cat announced that it would reduce the employee count by 1,400 at this facility. The company also said that production costs were so high at Gosselies that it was cheaper to import machinery from outside that it was to make it there. The workforce reduction started in the first quarter and will continue throughout the year. The company recorded a $149 million charge in the first quarter as a result. Total charges through the year related to the Gosselies plant restructuring are expected to be around $300 million.

Last thoughts
Caterpillar has significant European exposure, and it could be a big beneficiary once market conditions improve. The slight improvement in the construction market has already resulted in sales gains for the company in the first quarter. Given recent indicators, though, the timing of a full-fledged recovery in Europe could be a little hard to predict. The company is capitalizing on the improvements and opportunities that are evolving from the recent uptick in the continent and is simultaneously going for aggressive cost reductions to stay competitive.

How Secure Is Caterpillar's Future in Europe? @themotleyfool #stocks $CAT Next Article
Current