Don't look now, but I think Harley-Davidson (NYSE:HOG) just turned into an environmentalist.

Crazy as it sounds for a company known for churning out big, bold, and rumbling motorcycles, Harley-Davidson announced last month that it's toying with the idea of building an electric Hog -- a big "green" motorcycle to move Harley-Davidson into the 21st century. 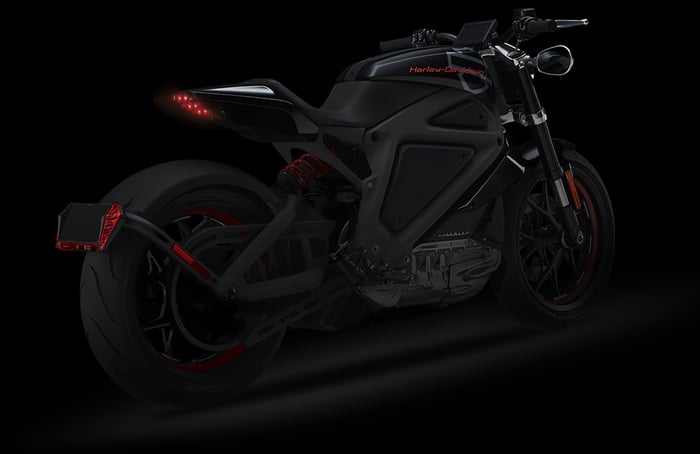 This is the bike they call "LiveWire." Photo: Harley-Davidson.

Dubbed "Project LiveWire," this bike is not yet for sale. It does, however, exist. And last week, Harley began touring the country with its new electric motorcycle in tow, offering motorcycle enthusiasts the opportunity to test-drive the vehicle at 30 of its dealerships, and collecting feedback on what they like (and don't) about it.

For which we're certainly grateful. And in that spirit, having checked out the company's presentation, and examined what the press is saying about it, here are our first reactions to news of Harley's big green motorcycle (which is actually black) -- as investors.

We mentioned the green bike is black, right? Photo: Harley-Davidson.

Inaugurating the LiveWire project, Harley-Davidson has proven once again that it's not afraid to -- well, I won't say "think outside the box," because that phrase has become tired.

Instead, let's just say Harley-Davidson is putting its annual $150 million research and development budget to good use, exploring products that consumers might like to buy, and pay money for, in the future. Already, these efforts have yielded successes in the form of Project RUSHMORE (which Harley management said contributed significantly to last quarter's big earnings beat) and the "Street" line of small bikes targeting foreign and urban buyers.

Not all of these ideas will work out as well, of course. Indeed, LiveWire might turn out to be one of the failures. But that's why Harley-Davidson plunks down its $150 million not just once, but year in and year out. So long as this investment in R&D keeps producing $6 billion in annual sales and profits of $775 million, we think the R&D expenditures are money well spent.

We like, too, the fact that Harley is putting electric irons in the fire early, and not allowing upstarts like Zero Motorcycles, Terra Motors, and Lightning to steal too big of a march on it, in case the electric motorcycle market decides to take off. Harley's staking its claim in the market, and if it does take off, it can quickly put its $6 billion in annual revenues to work expanding production of electric bikes.

And finally, we like Harley's marketing spin on LiveWire's lack of a roaring 1,440cc engine. In the place of that growl, the company says its new electric bike offers a fighter jet engine's roar -- designed, as Chief Marketing Officer Mark-Hans Richer put it, "to differentiate it from internal combustion and other electric motorcycles on the market."

...and what we don't
All that being said, the statement from Richer that really jumps out at us is this one: "Project LiveWire is more like the first electric guitar -- not an electric car." Now why would he say something like that?

When you hear "electric motorcycle," Harley-Davidson does not want you to think of this. Photo: Wikimedia Commons.

In the press release, Richer quickly segues into some pablum about how the new bike runs on electricity as an "expression of individuality and iconic style that just happens to be electric." Yadda, yadda. Investors, however, should home in on the ways that LiveWire could indeed resemble electric cars -- in being very expensive to make, and not all that profitable.

Take Tesla Motors (NASDAQ:TSLA), for example -- the poster child for the electric-car movement. Tesla isn't a complete disaster as a business these days. It's earning nearly 25% gross profit margins on its new Model S electric sedan. On the other hand, Tesla still isn't earning a profit after factoring in selling, general, and administrative expenses. It's nowhere near earning a bottom-line net profit, either. To the contrary, at last report, for every $1 worth of electric cars Tesla sold, the company was losing six and a half cents. And Tesla has been trying to earn a profit in this business for more than a decade -- so far, with no luck.

Considering that so far, electric cars appear to be a money-losing operation, it's no wonder Harley-Davidson doesn't want people thinking of LiveWire as being like an electric car.

The upshot for investors
I don't much care whether a new LiveWire electric motorcycle growls like a tiger, screams like a fighter jet, or purrs like a kitten. So long as it earns Harley-Davidson 39% gross margins like a gasoline-powered Fat Boy, I think investors will be well served.

Harley-Davidson earns 39% gross margins on its current line of motorcycles -- 14 percentage points better than Tesla has ever achieved. Photo: Harley-Davidson.

Harley-Davidson Has a Big Green Motorcycle -- but Will It Strike Gold? @themotleyfool #stocks $HOG $TSLA Next Article
Current