The year is halfway in the books, and investors have cheered the market's dramatic rise over the past year. After last year's astronomical climb, however, leading stock indices have been hard-pressed to repeat those gains this year.

The S&P 500 (SNPINDEX:^GSPC) has posted gains of more than 6% so far, flirting with record highs and delighting Wall Street. Yet for global investors, gains haven't been so easy to come by: Germany's DAX (DAXINDICES:^DAX) has managed respectable gains so far on the year, even as Europe struggles for consistent economic growth. Asian markets, meanwhile, have taken a beating this year as China looks to keep up with high expectations for its fast-growing economy and investors wait for better results from Hong Kong's Hang Seng (HSIINDICES: ^HSI) index.

Let's go around the world and take a measure of the market's health at the halfway point in 2014 -- and see what investors can expect from the globe's leading economies and stock indexes through the next six months.

Europe's economy is cold, but markets are heating up
Europe isn't the pinnacle of global growth, considering the continent's struggles since the recession. Countries on the eurozone's periphery continue to fight economic contraction, while Germany hopes to keep its growth churning behind its strong export sector. Recent data shows that France's economy could be slamming to a halt, as French manufacturing activity weighed on the eurozone in June and unemployment climbs. Remarkably, however, European stock indices have managed to keep pace with the S&P 500 in 2014 despite these troubles. 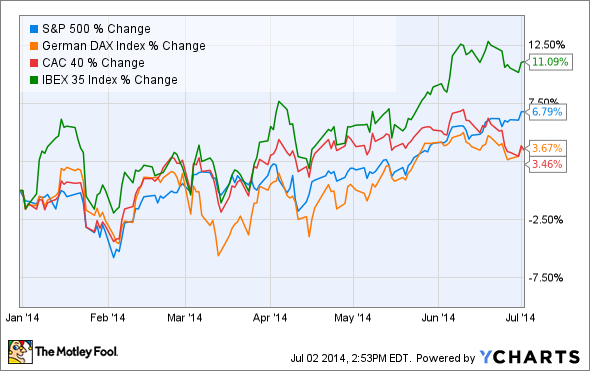 Spain's IBEX has enjoyed a stellar year, outperforming the S&P even as the Spanish economy lags behind the eurozone. What's the catalyst? The country's slowly begun to crank the gears of recovery after years of high unemployment and economic downturn. Spain's Purchasing Managers Index, a measure of manufacturing activity, outperformed Germany's in June and reported faster expansion at a rate nearly two full percentage points above May's reading. While Spanish unemployment remains over 25% -- a drastic number -- that figure has declined in 11 straight months. It's not a victory for Spanish recovery just yet, but it's a sign that things are improving for one of the hardest-hit economies in Europe.

That bodes well for Germany and the DAX -- and for leading German stocks. Germany's economy relies on exports perhaps more than any other major economy in the world, and while Europe's largest market has kept up growth in the post-recession period, Europe's struggles have weighed on its major international companies. Germany's 0.8% first-quarter growth kept the eurozone out of contraction, and if hard-hit economies such as Spain and Italy can begin to turn around from the depths of recession, it will bode well for German exporters.

That's good news for German automakers in particular. Volkswagen (OTC:VWAGY) is Europe's largest car-producer, and the company enjoyed 9.6% sales growth in Europe in May. While Volkswagen has made impressive gains overseas -- fast-growing China has emerged as Volkswagen's largest market -- Europe is a critical cog for this automaker. It's particularly important, as U.S. sales took a big hit for Volkswagen in June, declining by 22% year over year. Overall, new car registrations jumped by 4.5% across Europe in May, and VW and fellow European automakers -- and their investors -- will need that number to keep up in coming months.

Stocks aren't so hot in Asia
While Europe's stock indices have done well this year, it's been a different story for investors across the Pacific. Only South Korea's Kospi index has managed to post respectable gains near the S&P's level in 2014, while Japan's Nikkei 225, last year's feel-good story on the international market scene, has felt a painful reversal of fortune this year. 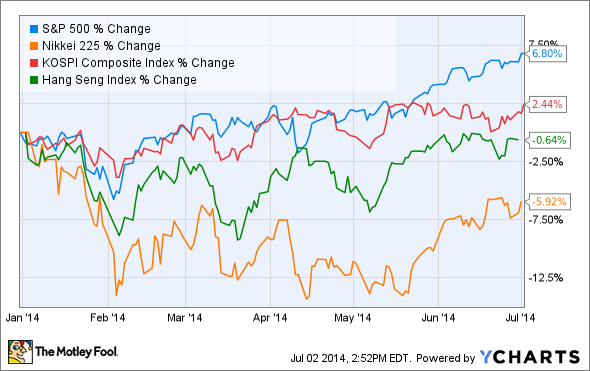 What has weighed down Japan? Blame it on a mix of a slight slowdown and last year's big run-up. The Japanese economy's still in a good position, even as business confidence has declined in 2014. But with the Nikkei jumping more than 70% over the past two years, even adjusting to a more sustainable pace of growth has left investors taking profits from Asia's second-largest economy -- particularly after Japanese exports declined in May for the first monthly fall in over a year. Still, the trend's pointing up: Capital spending has picked up with the end of two decades of economic stagnation, boosting the country's growth above expectations so far.

With Tokyo preparing more aggressive military investment to counter China's influence, Japan's economy could continue to surge through the rest of 2014 -- and the Nikkei could see a turnaround, albeit not likely on last year's level -- particularly if the Bank of Japan launches further easing measures.

China, meanwhile, is looking to hang on to its 7.5% growth picture as the economy has slowed from its astronomical growth of the last decade. Manufacturing activity has picked up in China lately, as the country's PMI jumped to expansion in June from previous contractionary levels. However, that might not be enough for stocks, unless Beijing plans more aggressive stimulus measures of its own. Chinese corporate earnings and revenue projects are on the downswing, according to Bloomberg. The Chinese real estate market is under fire after booming in recent years, and analysts want more from Beijing to boost consumption.

As China's overall growth threatens to miss the government's 7.5% expectation for the year, Internet stocks still look like a strong bet in a market that's experiencing a wave of urban and middle class growth. Baidu (NASDAQ:BIDU) enjoys 160 million mobile users a day on its search engine, and China's pivot toward domestic tech companies recently bodes well for this online giant. Mobile has emerged as Baidu's biggest opportunity: The Internet giant's seen impressive double-digit growth in both video content and mobile downloads in 2014, positioning Baidu to take advantage of the rise of a tech-embracing urban Chinese population. While Baidu's watched as rivals chip away at its PC market share, the company still holds on to more than 59% of the market overall. That leadership bodes well for the long term, and this stock's climbed nearly 70% in the past year.

Recovery ramps up
Overall, the world markets are still finding their footing in the post-recession period as economies look to ramp up recovery and growth. Germany remains Europe's best bastion of stability for investors, as the export-driven country's top international giants like Volkswagen look to make the most of markets like China. Over in Asia, the Nikkei and Hang Seng may be struggling in 2014, but both the Chinese and Japanese economies have momentum going forward, even in the former's struggling to keep up with high growth projections. As always, investors need to keep their eyes on the best companies around the world with the top business fundamentals -- but overall, the global economic recovery is making this year a good time for investors.