One of the essential factors in value investing is dividends. Warren Buffett calls good dividend payers "forever stocks." Boeing (NYSE:BA) fits the bill as it's offered regular dividends to its investors. In December, it increased dividends by a jaw-dropping 50% in one fell swoop, Boeing's biggest hike ever, thrilling investors. But there were concerns, too, given the tepid defense market and the billions Boeing is spending on its Dreamliner development program. On top of that, the company's future deliveries could be a little dicey as more orders are flowing in from the emerging economies, and there's always a risk of cancellation. So, did Boeing do the right thing? Will it be able to sustain the dividend?

Boeing has consistently increased or at least sustained its dividend payment since 1937. In the past decade, the company has increased dividends every single year, except 2010 and 2011. Even after revenue plunged in 2008, when aircraft deliveries had to be postponed because of challenges on the production front and an extended labor strike, it raised its dividend in 2009. But when there was another fall in 2010, and commercial deliveries declined, the company didn't increase dividends for two years, although it sustained the existing payout.

Now, with things taking a turn for the better, and the commercial segment recovering, Boeing has rewarded investors who stuck with the company through the troubled years. At the same time, Boeing directors have authorized a $10 billion share repurchase program in addition to the $800 million that remains from past authorization. 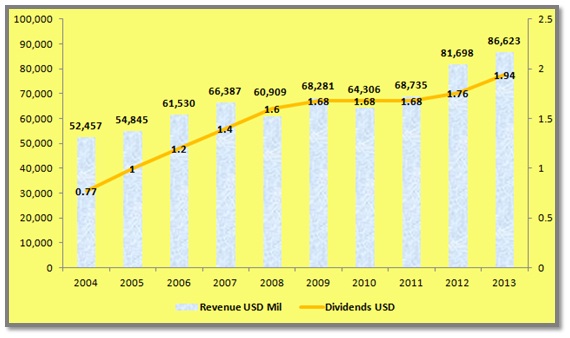 Boeing's revenue and dividend per share. Chart made by author. Data source: Morningstar.

Strong cash flows and sustainable payout
On the hike and buyback, Boeing CEO Jim McNerney said, "These actions reflect sustained, strong operational performance by our businesses, increasing cash flow, and our confidence in the future." Boeing's cash generation has been impressive. In 2013, the company generated more than $8 billion in operating cash flow, about $700 million more than the previous year, aided by higher deliveries and order volumes. In 2012, the company had increased operating cash flow by a whopping $3.5 billion for the same reason. Boeing has also kept its capital spending in check, with capex of $2.2 billion in 2013.  No wonder its free cash flow generation is solid.

In 2013, it generated nearly $6 billion free cash flow and followed it up in the 2014 first quarter with an unexpectedly strong $615 million. RBC Capital Markets had forecast $545 million. In a Reuters report, Rob Stallard, analyst at RBC Capital Markets, said, "We think investors will be breathing a sigh of relief, the actual result has turned out far better than some feared." 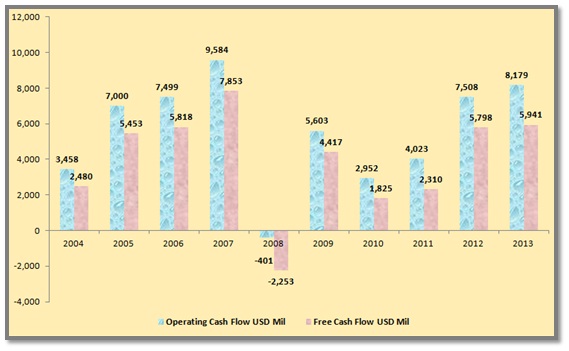 It helps that Boeing has a payout ratio hovering around a modest 35%. Investors may like higher payouts, but if a company makes it a regular practice, there could be greater fluctuations in future payments. Boeing's humble payout leaves higher retained earnings at its disposal to reinvest in core activities. It allows Boeing to have more control over future dividend payments and keep it stable. 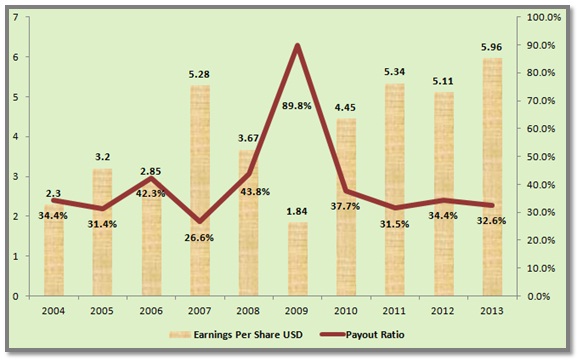 Earnings prospects
Boeing's past track record of dividend payments, impressive cash generation, and modest payout ratio make it seem like a reliable dividend payer, but the final test lies in its future prospects. For any company to sustain or increase dividends, it has to grow its business and generate profit. Let's see how Boeing stacks up.

A cut in U.S. military spending has put a question mark on the growth prospect of Boeing's defense segment. But the company's commercial business is witnessing excellent growth. By the end of the first quarter of 2014, Boeing's backlog stood at a stupendous $423 billion, of which $374 billion was for commercial aircraft.

The aircraft maker has increased the production rate of its 737 jets and 787 Dreamliners to 42 a month and 10 per month, respectively.  This allows the company to boost deliveries and sustain solid revenue growth. In addition, the company's "partnering for success" plan aims at tightening costs and widening margins. These developments augur well for Boeing's growth and would help secure a regular dividend. For the current year, the company has raised its earnings outlook from $7.00-$7.20 to $7.15-$7.35 a share on account of a tax credit.

Parting words
With effective plans of driving revenue, attaining cost efficiency, and generating cash, the company is determined to maximize shareholders' value. But macroeconomic issues or risk of unusual costs are beyond any company's control, and they do have an impact on its top and bottom lines. However, barring such factors, Boeing looks like one of Warren Buffett's "forever stocks."

Can The Boeing Company Be Your "Forever Stock"? @themotleyfool #stocks $BA Next Article
Current