Netflix (NASDAQ:NFLX) is no stranger to bold technology hacks. The original DVD-by-mail service turned the movie rental world on its head and killed an entire industry. Right now, Netflix is killing its own DVD business by getting the world hooked on newfangled digital streaming services.

As often as Netflix upends traditional business thinking, the company also becomes the target of audacious third-party hacks. This week, there's a double whammy going on.

This expansion doesn't cost Netflix one red cent because there are no new services on tap. Instead, a regional Internet service provider Down Under decided to help its users work around Netflix's geographical limitations.

VPN connections are a well-known tool for accessing Internet services in places where they're not exactly allowed. The intrepid Netflix viewer simply routes network connections via a series of routers, making the data requests look like they came from somewhere else.

For example, I've read that VPN tricks already help large numbers of consumers in Japan and Australia access American Netflix streams. Netflix hasn't officially expanded to these markets yet, though rumor has it that they might join the fold in 2015. Yet thousands of Australian users circumvent the technological roadblocks to enjoy Netflix streams intended for American, European, or Latin American customers.

The new twist to New Zealand-based Slingshot's service is that you don't have to be a hacker to run the VPN trick. Using Slingshot's "Global Mode," traffic is automatically guided through overseas access points. This feature is on by default, and is a selling point for Slingshot, whose ad copy reads: "We make it super-easy to stream your favourite TV and movie sites from around the world -- even if they are normally blocked to NZ residents. It's very cool."

In other words, Slingshot is taking this obscure workaround into the mainstream. As the third-largest ISP in New Zealand, Slingshot could make some real waves here. 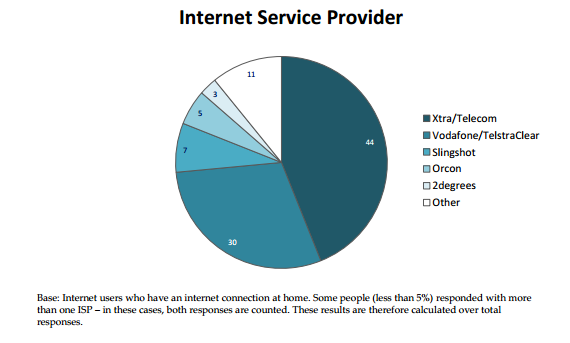 So that's one hack-attack. Not that Netflix would mind some help reaching paying users in new markets, but its content providers would surely like to collect license fees for streams in New Zealand and elsewhere. The existing agreements were not designed to cover the globe, the occasional VPN-armed hacker notwithstanding.

Slingshot's 7% share of 5 million New Zealander broadband accounts works out to just 350,000 VPN users. That's a rounding error in Netflix's quarterly subscriber additions, even if every single Slingshot user signs up for a Netflix account right away. So this particular service isn't that big of a deal.

But Slingshot could set a precedent for others to follow, and that's what Netflix might actually worry about. If ISPs start following Slingshot's lead and introducing dead-simple VPN tools for the common consumer, there'd be a nearly unstoppable global trend under way. The company could -- and should -- come under fire from its content partners if it lets such workarounds continue unabated.

I wouldn't bet against Netflix finding a technical solution to this brewing problem, though it is a tough nut to crack. The company needs to find new ways to keep its streams within approved markets without blocking access for legitimate subscribers.

If not, Netflix would eventually need to sign worldwide distribution rights for everything, rather than the much cheaper market-by-market license patchwork it manages today. Studios would insist on this if Netflix were serving significant subscriber hordes in unsupported markets.

That would be great for consumers everywhere, and it would instantly make Netflix a completely global service, but the costs would skyrocket, so the company would be stuck between a rock and a hard place. Crushing content bills balanced against uncertain subscriber additions could kill Netflix very quickly, while worldwide distribution rights to a much smaller library would change the service's value in myriad ways.

So I'm looking for the tech wizards in Los Gatos to come up with new ways to enforce geographical limitations, to the chagrin of VPN users in unsupported markets. No, I don't know exactly how Netflix could achieve this technically difficult feat, but I'm ready to be surprised.

That's not all, though.

PopcornTime lets its users tap into pirated movie and TV show feeds without worrying about all that messy downloading. To the consumer, it looks and feels a lot like Hulu or Netflix.

But the app doesn't rely on signing license deals with content producers. Instead, it leans on a plethora of mostly unlicensed and illegal BitTorrent libraries. The service flaunts its dark side, advertising access to films that are still in theaters.

PopcornTime gives its users access to things you simply can't get on Netflix today. Like Slingshot's VPN, the real threat here is the way this app takes the horn-rimmed nerd glasses out of using technology hacks. The app is already available for Android users, with early versions for Mac, PC, and Linux systems as well. Why pay for the limited Netflix library when you can get everything for free?

Well, Netflix has some allies in this particular fight. This time, the company stands back to back with Hollywood. The original Popcorn Time operation shut down after just a week on the market, citing public pressure over the piracy aspect of its services.

The current version is a community effort, run by a loose band of unpaid coders. Its Android app was banned from the official Android app store, so you won't stumble across it while looking for Flappy Bird. You have to change a few settings on your phone or tablet before installing Popcorn Time as a third-party app. In other words, this one is still a long way away from the real mainstream.

But Chromecast support could change all of that. The PC and Mac versions just found a simple way to reach your big-screen TV, and that's always a game changer.

For Netflix, unlicensed options like Popcorn Time are simply more competition. The company has allies that will help push this threat back, but it's really just a matter of time before one of these royalty-free hacks enters the cultural mainstream anyway.

At that point, it's up to Netflix to build a premium service that's worth $9 a month -- even if you can get a similar experience for free.

This is where the spit-shine polish of seven years in the streaming market will come in handy. Nobody has more experience in digital streaming services than Netflix, and the company has a wealth of operating data to dig into. If Netflix can curate its library and help its customers make sense of a bewildering entertainment market, that'll be a weapon against piracy. If it can offer smooth, stutter-free streams, while the best pirate services deliver lower-quality experiences, that's another weapon.

Popcorn Time isn't a huge threat all by itself, but it's the tip of a much larger iceberg. The way to navigate around the deadly piracy menace is to keep developing a better service, staying one step ahead of the corsairs and freebooters at all times.

Time to cut and run?
Netflix is most certainly in the crosshairs of hackers everywhere. There are real threats here, and even the seemingly helpful outsider hacks can hurt Netflix in the long run.

Then again, that's true of pretty much every major business. Netflix has been on the think-outside-the-box side of these sea changes before, and knows better than most how to adapt to new market conditions. The company makes a point of stacking up on the best talent available, and is not afraid of staring down new challenges.

In short, I can think of very few companies better suited to deal with technological challenges than Netflix. This company has been living The Innovator's Dilemma since the day it was born.

Call it conviction or call it faith -- either way, I believe that Netflix will stave off both of these challenges, just as it has overcome all sorts of threats throughout its history thus far. As usual, the correct response to groundbreaking challenges is even more innovation. Nobody does it better.

And I'm still holding on to my Netflix shares for the long run.