Please ensure Javascript is enabled for purposes of website accessibility
Log In Help Join The Motley Fool
Free Article Join Over 1 Million Premium Members And Get More In-Depth Stock Guidance and Research
By Chris Neiger - Jul 14, 2014 at 7:00AM

A new report says Apple is delaying production of its iWatch -- we explain how that could impact the device's sales.

There's no shortage of predictions for Apple's (AAPL -0.14%) upcoming wearable device, especially when it comes to release date rumors. While most analysts think an iWatch will debut sometime this fall, Apple analyst Ming-Chi Kuo put out an investor note this week saying production of the iWatch will be delayed until late November. 9to5Mac reported that Kuo thinks the software and hardware pairing is causing the delay, and he's reducing his shipment estimates of the device by 40% -- down to 3 million for 2014.

We don't know for sure whether or not Apple is delaying the iWatch, so let's talk instead about what it actually means for the company if that does indeed happen.

Timing is (almost) everything
Let's assume for a minute that Apple was planning on starting production of the device in September; but now that won't happen until November. Apple's fiscal Q1 2015 starts in October, so if we see an iWatch launch in November or December, that would still meet the same quarterly timeline as analysts had previously predicted -- though quarterly revenue from the iWatch would obviously be less.

This chart from Statista shows how, during the past few years, the fiscal first quarter brings in the most sales for Apple's iPhone. 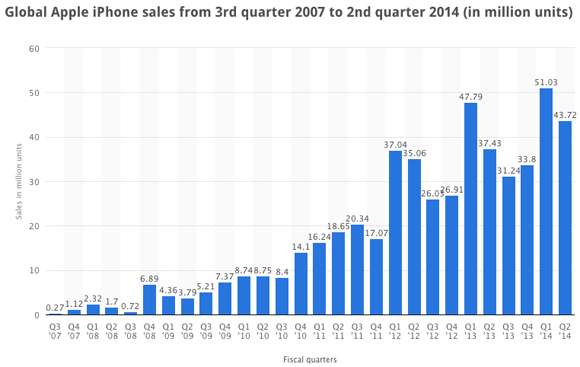 Though it missed analysts' expectations, Apple sold a record 51 million iPhones in the fiscal Q1 2014, which ended in December. And it's not just the iPhone. During the 2013 holiday season, Apple was able to boost its U.S. tablet market share to 33.8%, up from 29.7% in the previous quarter .

Apple times its product releases to benefit from holiday season sales. Since 2011, new iPhone models have been released in either September or October. And since 2012, new iPad models go on sale in November.

Keeping this in mind, it's likely that Apple is extremely interested in bringing its iWatch to market in fiscal Q1. Analysts have estimated an iWatch could bring in anywhere between $1.75 billion to $17.5 billion in the first 12 months. That's a huge range, but noted Apple analyst Katy Huberty thinks Apple could sell between 32 million and 58.5 million units in the first year.

If there's one thing Apple wouldn't do it's rush a product to market. The wearable space is still in its infancy, and adoption rates for such tech is still unknown. Though it doesn't want to miss the sales bump it could receive from the holiday season, Apple probably wouldn't risk launching an iWatch if it wasn't completely ready for the mass market. If the new report proves true, Apple will get a little extra time to perfect the device, while still releasing the watch in the all-important fiscal Q1.

Chris Neiger has no position in any stocks mentioned. The Motley Fool recommends Apple. The Motley Fool owns shares of Apple. Try any of our Foolish newsletter services free for 30 days. We Fools may not all hold the same opinions, but we all believe that considering a diverse range of insights makes us better investors. The Motley Fool has a disclosure policy.