One of the biggest knocks against Ford Motor Company (NYSE:F) as an investment is simple: The automotive industry is capital intensive, which puts pressure on Ford's free cash flow. That's a problem when many investors want to invest in a cash churning juggernaut that can return more value to shareholders.

Now, the flaw behind this thinking is that Ford can't produce strong free cash flow because of the capital-intensive production machinery, material costs, and facility requirements. While this is partially true, it doesn't explain the entire story. Even with stagnant free cash flow, Ford is a couple of years away from spending its cash wildly differently, which should enable management to return significantly more value to shareholders.

Show me the money!
Cash flow is a vital factor to follow for any company you own stock in, especially one in a cash-intensive industry. Ford must use its cash flow to invest in its future growth through building new factories, investing in research and development, improving technology, and improving its financial status. If Ford lacks the cash flow to innovate vehicle designs and technology, keep production facilities up to date, or its financial status healthy, its business could decline quickly in the highly competitive automotive industry.

The remaining lump sum, after Ford's capital expenditures, is its free cash flow which represents the cash it has to reward shareholders through increased dividends and share repurchase programs. The more free cash flow Ford produces, the happier investors will be, period.

While a common argument is that Ford doesn't produce enough free cash flow to warrant a strong investment opportunity, because of its capital intensive industry, the bears might not understand where Ford's cash has really been going and when it will be used differently.

An invisible cash hog
Most bearish arguments about cash flow overlook that Ford's cash has been going to fix one of the automaker's most overlooked problems: a massively underfunded pension plan. In fact, at the end of 2012 Ford's pension plan was underfunded to the tune of $18.7 billion -- a bigger obligation than Ford's automotive debt at $14.2 billion, also at the end of 2012.

But Ford decided to fix this problem over the past two years dumping a combined $8.4 billion into the fund. With Ford's largely voluntary dumping of cash into its pension fund it cut the plan's underfunded status in half, to only about $9 billion, at the end of 2013.

This year Ford plans reduce its contributions significantly and will contribute between $1 and $2 billion into its pension fund through 2016; that's favorable compared to 2012's and 2011's contribution of $5 billion and $3.4 billion, respectively. 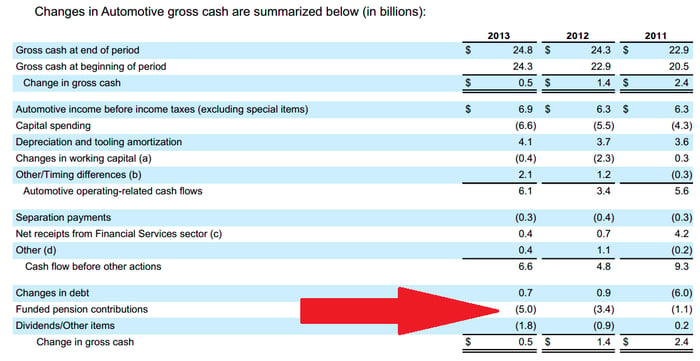 Down the road
Ford has learned its lesson since the great recession and has focused on strengthening its financials. For this reason, with the underfunded pension largely resolved, expect management to put more of an emphasis on paying off its automotive debt before anything else. Ford expects to have its automotive debt reduced from $15.7 billion at the end of last year, to roughly $10 billion at the end of next year.

After Ford brings its automotive debt down to that level, it creates a potential sweet spot in time for investors.

Consider that in 2015 and beyond, Ford will have largely supplied its underfunded pension plan, considerably lowered its automotive debt, Europe will be break-even which would have added roughly $1.6 billion to Ford's bottom line in 2013, as well as absorbed costs from two years of launching its most aggressive and costly vehicle launch schedule in history.

With those major developments taking less and less of Ford's cash flow it sets the table for Ford's gross cash to balloon or the cash could be refocused to increase its dividend at an accelerated rate to reward patient shareholders. The cash could also be used to repurchase a significant amount of shares which have been diluted over the years; heck, without massive pension fund obligations Ford would have the free cash flow to do both at a very accelerated pace, compared to today's levels.

How much would that enable Ford to increase its dividend, you ask?

Well, for additional perspective, consider this: Ford's combined pension contributions of $8.4 billion, from 2013 and 2012, are more than three times the cost of its dividend, at $2.7 billion, for the same time frame. While the latter figure doesn't account for Ford's recently increased dividend, simply imagine if those pension contributions and dividend payments were reversed? Hypothetically, Ford spending $8.4 billion on dividend payments over a two-year period would equate to a quarterly dividend of $0.26 per share -- that's more than double what Ford pays now, five times more than it paid in 2012, and an amount the automaker hasn't paid since 2001.

Bottom line
Ford appears to be treading water now, as it spends much of its cash on building for its future. That's the type of company you want to own shares in, even in a capital intensive industry. When Ford begins to spend less on its problems of today, and more on shareholder friendly returns of tomorrow, patient investors should reap the rewards. I suppose the bears are right in one respect: Ford's free cash flow could remain stagnant. But does stagnant free cash flow really matter if the amount returned to shareholders doubles or even triples over the next few years? It certainly doesn't matter to me, a long-term shareholder, and the additional cash returned to shareholders should boost Ford's stock price.