The end of Microsoft's (NASDAQ:MSFT) Windows 7 is in sight. Next January, Microsoft's five-year old operating system will lose mainstream support. From that point on, Microsoft will no longer update Windows 7's design or implement new features.

But while Microsoft -- and its hardware partners like Intel (NASDAQ:INTC) and Hewlett-Packard (NYSE:HPQ) -- would certainly prefer Windows 7-users to upgrade their current PCs to Windows 8-powered devices, the end of Windows 7's mainstream support, by itself, doesn't seem likely to trigger a massive PC upgrade cycle. It does, however, suggest the coming of something that could.

Another PC upgrade cycle?
All three companies -- Intel, Hewlett-Packard, and Microsoft -- would benefit from an extended PC refresh cycle, as the recent end of Windows XP's extended support has benefited shareholders in all three firms. 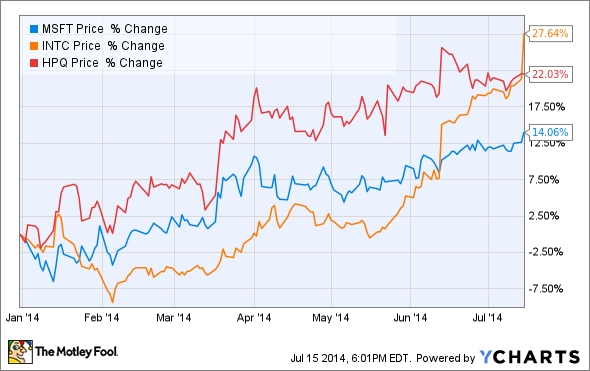 Intel shares had risen more than 22% year-to-date before its second quarter earnings report, and added another 4% in after-hours trading on Tuesday. The chip giant boosted its revenue guidance back in June, then beat it in July, turning in a second quarter report that was much better than expected. Intel's PC division saw its revenue rise 6%.

Hewlett-Packard and Microsoft have had a similar experience. In May, Hewlett-Packard reported a quarter with its personal systems revenue rising 7% on better-than-expected demand for corporate PCs, while Microsoft noted back in April that corporate demand for its Windows operating system was strong.

It's not surprising that corporations are buying a lot of Windows-powered PCs right now: Windows XP, Microsoft's now ancient operating system, lost its extended support back in April. PCs powered by Windows XP are still functional, but are no longer supported by Microsoft in nearly any capacity, making them highly susceptible to malware and security exploits.

Mainstream support vs extended support
Windows 7, however, will only lose "mainstream" support in January -- something that Windows XP lost in 2009. Microsoft will continue to update Windows 7's security until it too loses extended support, but that won't be until 2020.

Users may get a better experience upgrading to a newer version of Windows, but they won't have to, and it's likely that many of them won't -- even though Windows XP lost its mainstream support in 2009, as many as a quarter of traditional PCs were still it running as of April.

Windows 9 incoming?
Yet, the end of Windows 7's mainstream support could still be a boon to Microsoft, Intel, and Hewlett-Packard, in the sense that it could herald the coming of the next version of Windows. Windows XP, for example, lost mainstream support just a few months before Microsoft began offering Windows 7. If history repeats itself, Windows 9, then, will debut sometime in 2015.

Although Microsoft has bragged about the hundreds of millions of PCs currently running Windows 8, the operating system remains broadly unloved, with both consumers and Microsoft's hardware partners (including Hewlett-Packard with its short-lived Windows 7 "back by popular demand" promotion) increasingly looking to alternatives.

If Windows 9 can rejuvenate Microsoft's operating system, the businesses buying new PCs in 2014 could give way to consumers flocking back to Windows in 2015. Of course, that's assuming Windows 9 will be a success -- something that remains uncertain.

Nevertheless, the coming end of Windows 7 is an opportunity for the firms involved in the PC value chain -- Microsoft with its operating system, Intel with its processors, and Hewlett-Packard with the actual PCs. Certainly not as guaranteed as the recent Windows XP refresh, but a major opportunity.