International Business Machines (NYSE:IBM) might be the most iconic company in the entire multitrillion-dollar tech industry. For decades, its name was synonymous with technology, to the point where "IBM" was all but shorthand for computing hardware. Its century-plus history might even make it the oldest tech company in a world where tech titans rise and fall every few years. It's also one of the world's largest tech companies, trailing only a handful of othersin the global market-cap rankings.

But it's probably bound to be the worst-performing tech stock on the Dow Jones Industrial Average (DJINDICES:^DJI) for the foreseeable future. High performance isn’t a requirement to remain in the Dow, but if IBM can't do something about its flatlining revenue, it might eventually force the Dow's handlers to do the unthinkable and replace it with a more appropriate company.

Since the Dow has only 30 components, every spot on the roster matters, and the wrong component can mean the difference between a Dow that accurately represents the best of American industry and a Dow that falls behind by tracking yesterday's leaders. In fact, there's already a precedent for removing a massive tech company as it falls behind the silicon curve, and it looks rather similar to what IBM is going through right now.

Shrinkage for Big Blue?
Of the eight companies that have been Dow components since 1979 (when IBM was inducted) without interruption, only one has underperformed the index: IBM. 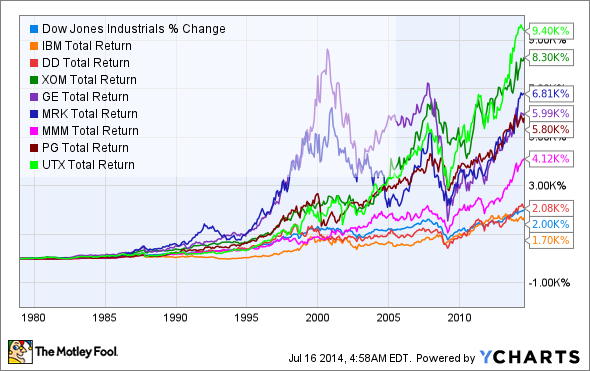 Of these eight companies, only one has enjoyed less aggregate top-line growth since the start of the dot-com era than IBM. 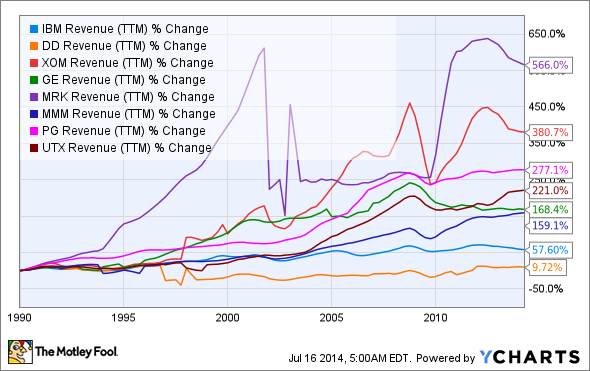 IBM is the company that, more than any other, was responsible for propelling enterprise computing hardware forward for decades, from the earliest house-sized monstrosities of the postwar years to the first true mass-market PCs in the 1980s. Today, IBM's hardware segment is both its smallest core segment and its weakest, with $2.4 billion in reported segment revenue for the first quarter representing not only a mere 11% of total company revenue but also a 21% decline from the previous year.

Hewlett-Packard (NYSE:HPQ) recently went through a similar rough patch, which ended in its ouster from the Dow after a 16-year tenure last year. Many analysts blamed the banishment on HP's low share price, but HP probably wouldn't have been forced out if serious fundamental weaknesses hadn't lopped off two-thirds of its value from the start of 2010 through the end of 2012. Like IBM today, HP wound up as one of the Dow's worst-performing stocks during its 16 years as a component: 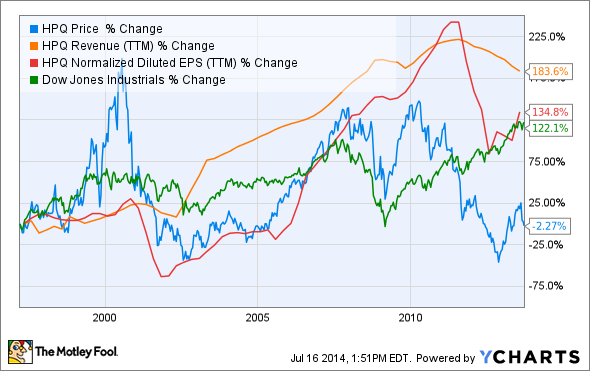 But while HP was far behind the curve in adapting to a world of commodity hardware, IBM began its transition away from hardware sales roughly two decades ago. IBM has worked hard to boost its earnings per share in recent years to levels that might better befit a software-and-services giant, but it still ranks dead last -- and has for a long time -- among all tech companies worth more than $100 billion in terms of profit per employee: 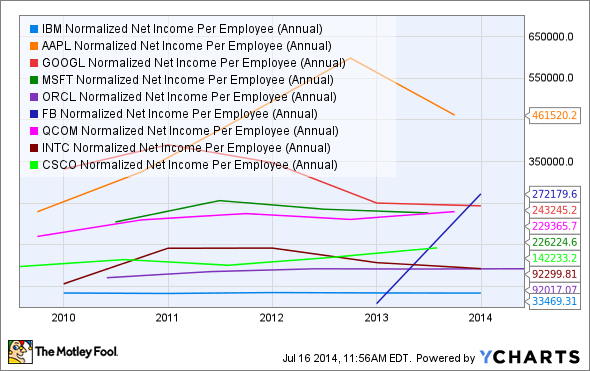 This is due in no small part to its humongous workforce, which is nearly four times the size of the second-largest workforce in the American tech industry: 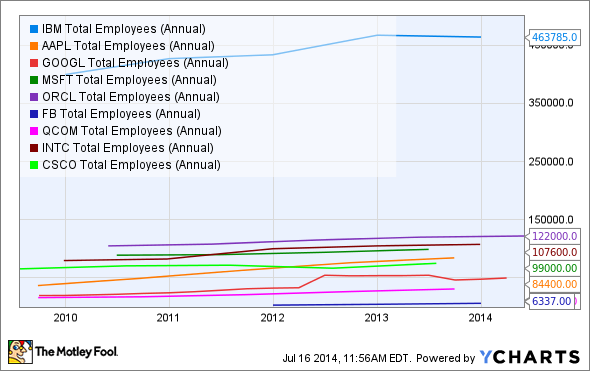 Despite the fact that it fell behind HP in annual revenue during the financial crisis, IBM has never maintained a smaller workforce than the onetime PC kingpin. At the end of 2013, there were nearly 150,000 more people working for IBM than for HP, and even though HP's net income has fallen far from where it was, its profit per employee ran neck and neck with IBM's for years.

Much has been made of IBM's cost-cutting efforts, which have focused on mass layoffs as a means of juicing margins, but the company's workforce was still 16% larger at the end of 2013 than it was at the end of 2009. IBM would have to lay off more than 64,000 workers from its 2013 year-end roster simply to get back to 2009's headcount. The net impact of those 64,000 new employees over the past five years has been a 3% uptick in IBM's revenue, which works out to about $49,000 in new annual revenue per person. Since inflation has added more than 3% to the cost of living over the past five years, IBM's revenue per employee is weaker now than it was before it started hiring those 64,000 people.

Teaching the old dog some new tricks
IBM has, of course, navigated industry transformations before. The company leapt into digital computing in the 1950s, even though sales of its punched-card tabulating machines (a 60-year-old technology by then) were still highly profitable. A foray into consumer computing almost destroyed IBM in the 1990s before it jettisoned that business and returned to its enterprise roots.

But this time, IBM can no longer rely on superior size to fend off more nimble competitors that are pushing hard into the cloud-computing arena. IBM would like to dominate cloud computing as it once dominated computing hardware, but it's a steep uphill battle against the inevitable commoditization of a core product -- Google has publicly stated that cloud-computing prices should be subject to the exponential rates of decline made possible by Moore's Law. A Bloomberg Businessweek feature on IBM's struggles points out a number of recent failures and shortcomings, including the loss of an important CIA cloud-computing contract to Amazon and a last-place showing on Gartner's cloud infrastructure quality rankings last year. The cost of switching cloud providers may not be trivial, but it's nowhere near as onerous as the costs of switching to new hardware, and that poses another challenge to maintaining profitability under IBM's new business focus.

Yesterday's titan
IBM is still one of the largest companies in America, and its cloud-computing revenue is still growing at a brisk pace. This hasn't been enough to offset problems in its other segments, and IBM can't rely on buybacks and financial wizardry to keep meeting its stated EPS goals forever. Having a share price higher than all but one other Dow stock may insulate IBM from eviction for a while, but even this won't justify its place on the index forever as multibillion-dollar competitors seem to spring up almost overnight.