On July 10, Costco Wholesale (NASDAQ:COST) reported sales metrics for the month of June. In spite of other retailers lamenting increasing competition and adverse weather, Costco managed to exhibit significant top line growth year-over-year. Given these encouraging results, might now be an excellent time to jump into the company's shares? If not, would a stake in Whole Foods (NASDAQ: WFM) be more sensible?

Costco's still growing rapidly
For the month, Costco reported sales of $10.9 billion. This represents a nice 10% uptick compared to the $9.9 billion management reported during June 2013. While a 6% jump in comparable-store sales (6% in the U.S. and 7% in Costco's International operations) have played a positive role for the retailer, shareholders also benefited from a 5% increase in store count to 658 locations from the 628 management reported in 2013.

Interestingly, Costco's breakdown of its number of locations in operation tells a story in and of itself. According to management, roughly 71% of stores were located in the U.S., down from the 72% seen in 2013. Although this still means that the U.S. is Costco's largest region, the fact that its U.S. store count is falling as a percentage of total store count, combined with higher comparable store sales growth abroad, points toward more interesting growth prospects abroad than at home.

Is Whole Foods a better play?
The past few years have been amazing for both Costco and rival Whole Foods. Between 2009 and 2013, Costco's revenue soared 47% from $69.9 billion to $102.9 billion. A big contributor to this increase in sales has been the retailer's aggregate comparable-store sales, which shot up 28% during this period. However, management has also attributed the company's success to a 20% jump in store count from 527 locations in 2009 to 634 by the end of Costco's 2013 fiscal year. 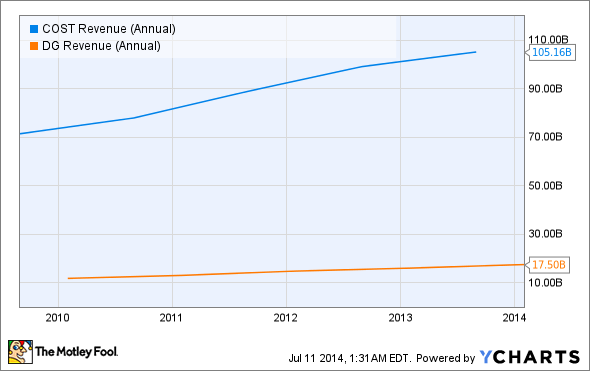 As impressive as Costco's growth has been, Whole Foods has seen even stronger results in recent years. Between 2009 and 2013, the company posted a stunning 61% rise in revenue from $8 billion to $12.9 billion. This was due in part to a 31% improvement in aggregate comparable-store sales. Like Costco, however, the retailer also saw a jump in store count, which grew 27% from 284 locations to 362.

Looking at profits, the disparity between both companies is even more visible. Over the past five years, Costco's net income rose 88% from $1.1 billion to $2 billion. While some of this growth was due to the retailer's higher revenue, other factors such as the company's selling, general, and administrative expenses (which fell from 10.2% of sales to 9.7%) played a role as well. 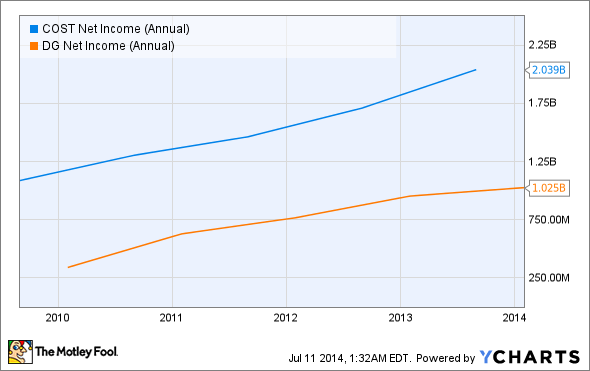 Just as in the case of revenue growth, Whole Foods managed to significantly outpace Costco's performance in recent years. Between 2009 and 2013, Whole Foods saw its net income jump 275% from $146.8 million to $551 million. To some extent, this rise in profits was driven by the company's increased revenue, but another big factor was the decline management reported in its cost of goods sold (from 65.7% of sales to 64.2%) and its selling, general, and administrative expenses (which dropped from 30.8% of sales to 29%.)

Foolish takeaway
Based on the data provided, Costco has had an amazing run over the past few years. It doesn't look like things are ready to slow down just year, either. The retailer's growth will eventually be limited as the industry becomes more saturated than it already has, but the company's results don't seem to indicate that that's the case yet. For this very reason, Costco appears to be a great prospect for the Foolish investor to look at deeper. Even with higher growth, though, rival Whole Foods might make for a more interesting play in the retail sector.