"The greatest shortcoming of the human race is our inability to understand the exponential function."
-- Albert Bartlett

You've probably heard the story about the guy who invented the game of chess.

It goes like this: An inventor brought his chess board to the emperor of China, who was so impressed he offered to grant the man one wish. The inventor had a simple wish: He requested one grain of rice for the first square on the board, two grains for the second square, four for the third, eight for the fourth, and so on. Sounding like a modest proposal, the emperor agreed. But filling the chess board's last 10 squares would have required 35 quintillion grains of rice – enough to bury the entire planet. Unamused, the emperor had the inventor beheaded.

While I doubt the story is true, its message is important to understanding the power of compound interest: When things grow exponentially, gains look tiny at first, modest in the middle, and then -- very suddenly -- they shoot utterly off the charts. 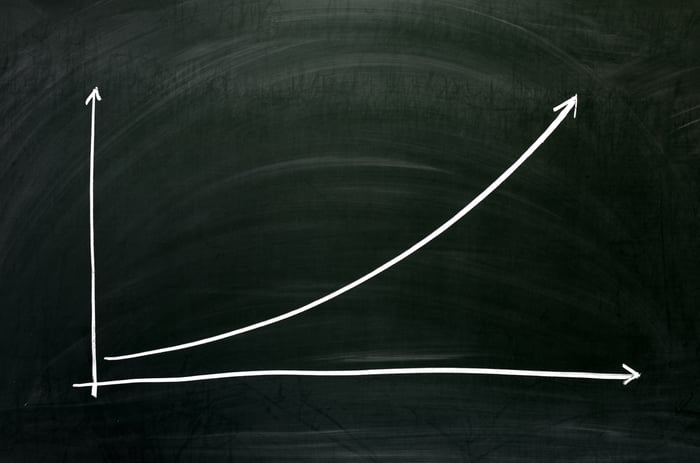 The key to making compound interest work is sticking around long enough to make it to the end of the chess board. That's where the massive gains are. It's why, of Warren Buffett's $63 billion net worth, $62.7 billion was added after his 50th birthday, and $60 billion came after his 60th.

You can apply this same logic to individual companies. My friend Patrick O'Shaughnessy recently calculated the average annual returns of all major sectors over the last half century: 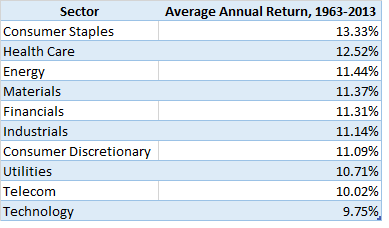 There could be all kinds of explanations for this table. Patrick notes that consumer-staple companies tend to have strong brands and moats that prevent newcomers from encroaching. Valuations could also play a role. So could luck.

But here's an explanation I find persuasive: Innovation is awesome, but it's hard and risky. Companies that are required to constantly change are constantly going out of business, and for each success story there are countless and constant failures. Boring companies like food and beer require little change. They just plug along quietly, selling the same products year after year. That sounds dull, but they are the ones most likely to survive long enough to make it to the end of the chess board. And the end of the chess board is where things start getting ridiculous.

The last 50 years was the era of technology, when the world went from abacus to iPad. Yet the single best company to own sells the same product today as it did 100 years ago. Part of this is because Altria is a successful company, of course. But its secret is that it's been a modestly successful company for an immodest amount of time. Lots of companies earned 20% annual returns for shorter periods of time, but Altria has earned them for decades. That enabled compound returns to go from impressive to extraordinary.

Investors have a tendency to go for the highest growth today. Some can invest that way successfully over long periods of time. But the more an industry changes, the harder it is as an investor to consistently bet on the ride side of change. I prefer to keep things simple. I like companies that sell the same thing today as they did 50 or 100 years ago. Food, household goods, those kinds of things. These companies are boring today, but they're more likely to be alive twenty or thirty years from now – all the way to the end of the chess board.