Initial jobless claims dropped 6.3% to 284,000 for the week ending July 19, the lowest level since February 2006, according to a Labor Department report released today.

After declining a revised 0.7% the previous week, this newest report came as a pleasant surprise for analysts, who had actually expected an incremental increase to 310,000 initial claims.

While The Wall Street Journal noted that the dip may come in part from a decline or delay in manufacturing facilities' normal retooling layoffs (which always occur around this time), there would have to be a significant departure from the norm to account for such a sizable shift. 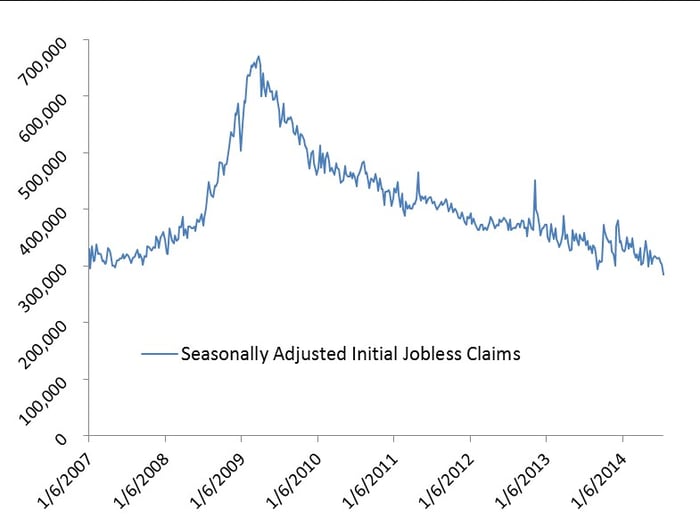 The week-to-week improvement was further supported from a longer-term perspective, with a 2.3% decline in the four-week moving average to 302,000 initial claims. Both the latest week's claims and the four-week average fall significantly below 400,000, a cutoff point that economists consider a sign of an improving labor market.

On a state-by-state basis, six states recorded a decrease of more than 1,000 initial claims for the week ending July 12 (most recent available data). Michigan (-6,850) and New Jersey (-5,890) made the largest improvements, due primarily to fewer manufacturing and education layoffs, respectively.

For the same period, a substantial 14 states registered increases of more than 1,000 initial claims. New York saw claims shoot up the most (14,430), citing transportation and warehousing layoffs as the main reason for its rise.