Please ensure Javascript is enabled for purposes of website accessibility
Free Article Join Over 1 Million Premium Members And Get More In-Depth Stock Guidance and Research
By Leo Sun - Jul 28, 2014 at 10:26AM

Can the new game, from the developer of "Halo," break industry records?

Activision Blizzard's ( ATVI 0.51% ) Destiny, which will arrive on Sept. 9, is widely expected to be one of the biggest games of the year. The company believes that the game, from former Halo developer Bungie Studios, will be the "best-selling new video game IP in history" and a possible successor to its aging Call of Duty series. 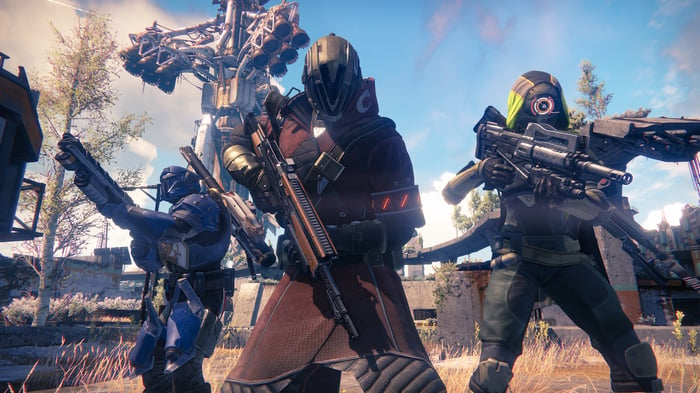 Cowen & Company analyst Doug Creutz forecasts Destiny could sell between 15 million to 20 million copies. That would likely be higher than sales of Ubisoft's Watch Dogs, another popular new IP that has sold 5.3 million copies since May. However, it wouldn't make Destiny the best-selling new IP "in history" -- that title officially belongs to Nintendo's Wii Sports, which sold a whopping 82 million copies after being bundled with the original Wii.

In terms of other triple-A titles, 20 million copies would even bring Destiny within striking distance of Call of Duty: Ghosts, which sold 22 million copies, although it would still fall short of Take-Two's (NASDAQ: TTWO) Grand Theft Auto V, which sold 36 million copies. In other words, Destiny might not be the biggest new IP in history, but it could certainly be one of the biggest games of 2014.

Meanwhile, Activision's 11-year-old Call of Duty series, which has gone through three primary developers -- Infinity Ward, Treyarch, and Sledgehammer Games -- is showing its age. Sales of Call of Duty peaked in 2011 with Modern Warfare 3's worldwide sales of nearly 30 million copies. Activision has milked the franchise with annual sequels, but Ghosts' sales of 22 million copies highlights the undeniable fact that sales are fading. That's not Activision's only problem -- players in World of Warcraft, its cash cow MMO, dropped from a peak of 12 million in 2010 to 7.6 million last quarter.

Therefore, Destiny could offset soft Call of Duty and World of Warcraft numbers, which have traditionally been considered Activision's pillars of growth.

Could Destiny crush Halo?
The success of Destiny could also be bad news for Microsoft. Microsoft has two upcoming Halo titles on the way -- The Master Chief Collection, which will arrive this November, and Halo 5: Guardians, which should launch in the fourth quarter of 2015. Both titles compete with Destiny for the sci-fi shooter audience.

The Master Chief Collection, which includes remastered HD versions of the previous Halo games, is important to Microsoft because it includes the Halo 5 multiplayer beta -- which could get gamers hooked onto Halo 5 long before it arrives. However, Destiny could completely overshadow The Master Chief Collection, which is simply a "greatest hits" compilation of Halo games. Activision has also launched the Destiny beta to anyone with a PS Plus or Xbox Live Gold account, and the game has already been met with fairly positive reviews.

Other games are already stepping aside -- Electronic Arts (NASDAQ: EA) recently delayed its triple-A shooter Battlefield: Hardline to "early 2015" for refinement issues, but it also probably wanted to avoid going head-to-head against Destiny in the fall.

Will Destiny convince gamers to stick with old consoles?
Destiny's success will certainly help Activision, but it won't do much for Microsoft's Xbox One, which continues lagging behind Sony's (NYSE: SNE) PS4 and Nintendo's (NASDAQOTH: NTDOY) Wii U with 5 million units sold.

Activision will release Destiny across four platforms -- the PS3, PS4, Xbox 360 and Xbox One, followed by a PC release in March 2015 -- which means major fragmentation even if 15 million to 20 million copies are sold. To make matters worse, side-by-side comparisons between the seventh and eighth generation versions of Destiny don't demonstrate a jaw-dropping difference in graphics -- which means that many gamers might simply buy the PS3 and 360 versions instead of upgrading their hardware.

The Foolish takeaway
Activision has a lot riding on Destiny's success. If the game hits Cowen's projections, it could become the company's third biggest source of revenue after Call of Duty and World of Warcraft.

However, Activision must be wary of Destiny cannibalizing Call of Duty: Advanced Warfare's sales, or rushing annual updates, which could diminish the franchise's value. Moreover, investors should remember that Activision plans to spend a whopping $500 million on Destiny, which means that it needs to sell 8 million to 10 million copies just to break even on development and marketing costs.

So what do you think, fellow gamers and investors? Will Activision's big bet pay off and generate a new steady stream of revenue to complement Call of Duty and World of Warcraft, or could the hype sputter out and cause the game to miss sales expectations?

Will NCSOFT's 'WildStar' Be the Next 'World of Warcraft'?

Can Marvel Unify its Video Games With the ‘Marvel Gaming Universe’?