In our latest write-up on General Electric (NYSE:GE), we highlighted the things investors should expect GE to come up with in the second quarter. It seems GE has checked most of the boxes in the earnings report. The company matched the analyst estimates on EPS, but failed to meet sales forecasts. However, strength in the industrial businesses signals that GE is progressing well in positioning itself as an industrial conglomerate.

Report card
GE reported consolidated revenues of $36.23 billion, translating into a 3.2% increase over the prior-year period, though missing analyst estimates by $30 million. For the quarter, Power, Oil & Gas, and Aviation were the main revenue-generating segments. However, Transportation revenue dropped 18% year on year, and Energy Management revenue shrunk by 6%, while Healthcare and Appliances & Lighting remained flat.

Analysts had estimated that the company would post earnings of $0.39 a share, and GE has delivered that. Though the GAAP EPS is lower at $0.35, after making adjustments for one-time expenses and discontinued operations, the EPS comes to $0.39, in line with predictions.

GE ended the quarter with total cash and cash equivalent of $87 billion, after returning to the shareholders $4.4 billion in the form of dividends, and $1.5 billion through stock buybacks. Though cash generated from operations was down 9% year to date, management expects the next half of the year to compensate for that. 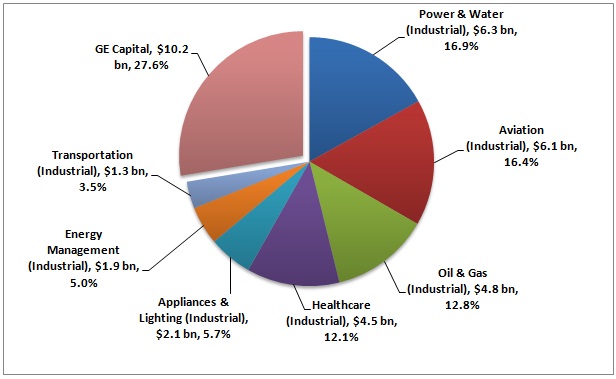 Industrial businesses steals the spotlight
The industrial segment, as a whole, did well, growing year on year 7% in terms of revenues, and 9% in terms of net profit -- in tune with CEO Jeff Immelt's restructuring strategy. The primary factors that contributed to the growth are the better-than-expected performance of the Oil & Gas -- 25% growth in segment profits -- and Aviation -- 12% growth in segment profits -- divisions. During the earnings call, Immelt said, "Some economic indicators are really quite strong like rail loadings, revenue passenger miles, demand for commercial credit and appliance market strengthened during the quarter."

GE's backlog numbers remained undented. It had ended the first quarter with strong backlogs of $245 billion, and the figure crept up by another $1 billion, to $246 billion, at the end of the quarter under review. During the quarter, the company received orders worth $25 billion, up 4% from last year's second quarter. However, backlogs related to equipment sales didn't show any change since the fourth quarter of 2013, though services backlog kept on swelling, and accounted for 74% of the total.

Alstom update
Management spent a lot of time adding color to the Alstom deal. Steve Bolze, VP, Power and Water, explained the revised offer, which involves GE's complete ownership of Alstom's gas and steam equipment and service businesses, accompanied by the creation of three 50:50 power joint ventures. Alstom's capabilities will add greatly to the Power & Water business, a division which is considered to be extremely crucial to GE's future.

Bolze also explained step-by-step how the company will attain its targeted $1.2 billion synergies from the Alstom deal, adding that, beyond this, management has only factored some modest savings, and there could be upsides. In the first five years, there would be $300 million synergies in Year One that would accumulate to $1.2 billion in Year Five. Nearly $400 million of the total savings could be achieved by restructuring manufacturing and service sites. There would be 5% savings potential from the $5-billion combined expenditure on sourcing, and the remainder would come from integrating the R&D functions and optimizing SG&A. GE would spend $900 million in the first five years for realizing these savings.

Some light on GE Capital
Revenues for the segment were down by 6%, at $10.2 billion, mainly due to lower assets and gains. During the earnings call, GE mentioned that it plans to carry out the initial public offering of the North American retail finance business, to be known as Synchrony Financial, by the end of July. GE will part with 15% of its holdings of the business in return for $3.1 billion. This means GE will still have $17 billion worth of position in the newly formed company. The company has decided to keep the capital that will be raised through the IPO with Synchrony in order to boost its liquidity levels.

Foolish takeaway
GE's strategy is clear -- even if it has to sacrifice some of its revenues by contracting its GE Capital business, it would do that as long as it generates higher contribution from industrial divisions. Christian Mayes, an analyst at Edward Jones, summed up the company's performance saying that the strength in the industrial businesses is exactly what investors were hoping for and, "They (GE) are moving in the right direction."