It's that time of year again. Starting in 2011, Apple (NASDAQ:AAPL) shifted its iPhone product cycle from summer to fall with the iPhone 4s. This pattern has remained true for the past three iPhone launches. Apple even shifted the iPad's launch cycle to the fall starting in 2012. That puts us just months away from the much-hyped iPhone 6.

Save the date?
The iPhone 6 is widely expected to come in 4.7-inch and 5.5-inch models. The larger version has been reportedly delayed and may not launch until December. A handful of speculative reasons for this situation have made the rounds in the rumor mill. Apple may look to minimize competition between the two models by staggering the releases. The iPhone maker may also be facing low component yields for the larger model.

Here's why this new leak might not stand up to scrutiny.

Apple doesn't tell retail employees much
This leak is being tied to retail employees, which calls into question its accuracy. Apple retail employees will directly tell you that the company doesn't give them any visibility into future product cycles. That's not surprising given Apple's infamous stance on secrecy, even internally.

As of last September, Apple had nearly 43,000 full-time equivalent retail employees. That's an awful lot of potential points of leakage if Apple were to share its plans with this army of retail workers. That's not to say that the retail segment can't provide clues as to when major product launches are scheduled. Vacation blackout dates are also another possible clue, since the company will set such dates when it expects a busy weekend. Apple has reportedly been blacking out certain dates in September, suggesting that the launch could come sooner than reported.

October 14 is a Tuesday
It would also be rather unusual for Apple to release the iPhone on a Tuesday, as it prefers to launch on Fridays. In fact, Apple has launched on a Friday every year except for one: the iPhone 4 in 2010.

Launching iPhones on a Friday accomplishes several ends. It maximizes the number of potential customers who can show up over the weekend and wait in line, earning Apple all sorts of positive media coverage and hype. This in turn allows Apple to release increasingly impressive figures each year for launch weekend sales. 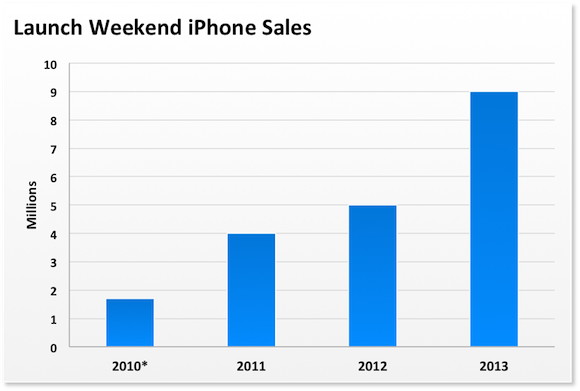 If Apple launches the iPhone 6 on a Tuesday, it would probably artificially limit sales over the first three days that it likes to tout. Instead, that date could be for a press event to unveil the iPad and/or iWatch, since Apple events are frequently held on Tuesdays.

Apple has been increasing the scale of its global iPhone rollouts each year, adding as many countries as possible to the first round of availability. Last year's launch marked the first time that China was included in the first round, with the China Mobile partnership announced a few months later. That trend will likely continue, and Apple is seemingly preparing for its biggest iPhone launch ever.