Long before stock markets existed, gold was one of the most popular measures of wealth in the world. Wars were fought and entire civilizations transformed in the pursuit of gold, and over the centuries, millions of people have risked and lost their lives exploring to find gold.

As old a history as it has, gold still plays an important role in investing, although not everyone agrees that gold makes a good investment. Warren Buffett and many other illustrious investors have argued against investing in gold, preferring growth-producing assets instead. Yet the yellow metal nevertheless retains appeal to those seeking to protect their wealth, and investors looking for gold exposure have a number of choices to get it. Let's take a closer look at gold and the many ways that you can invest in it.

What is gold and why is it important for investors?

At the most basic level, gold is a chemical element, with the metal being soft and easily shaped. It is largely impervious to air and moisture which gives gold much of its appeal for jewelry and coinage. But gold is also a good conductor of heat and electricity, which makes it useful for certain applications in the electronics industry.

Unlike silver, platinum, and other precious metals, though, gold's demand doesn't stem primarily from industrial uses. Rather, gold's historical function as a measure of value continues to keep gold demand high for monetary purposes. Although governments worldwide have turned to paper money rather than freely circulating gold, most major nations have gold reserves at least partially backing their currencies, and investors also use gold bullion as a way to speculate on the changing value of paper currencies.

What is the history of gold?

Gold has been used for monetary purposes for millennia, with gold coins coming into frequent use during the era of ancient Greece. But for modern investors, key moments in gold history include the decision of the U.S. government in the early 1970s to stop pegging the value of the dollar to gold, thereby allowing gold prices to fluctuate in dollar terms. That move led to a huge increase in gold prices, which climbed from the previous $35 per ounce peg to as high as $850 by 1980, only to fall abruptly when inflationary pressures subsided and reduced interest in the yellow metal as an investment. 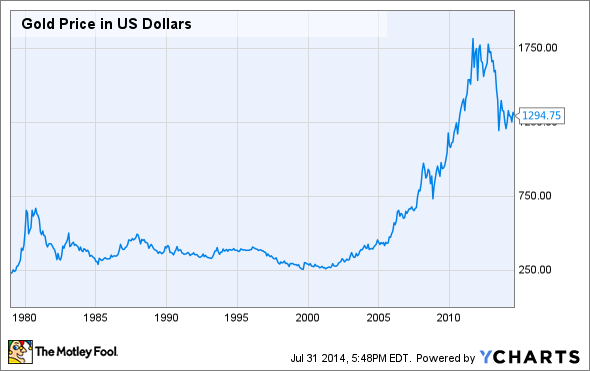 After that, gold went through a 20-year decline, with prices languishing until the bull market in stocks in the late 1990s. Between 2000 and 2012, though, gold prices skyrocketed again, and although prices have pulled back since 2012, they remain well above their typical historical levels in U.S. dollar terms.

How many ways are there to invest in gold?

In the past, investing in physical gold bullion was the primary way that investors got exposure to the yellow metal. Now, though, other gold investment vehicles exist that are simpler and more efficient, and gold-mining stocks give investors a different way to profit from gold.

Trading gold bullion typically involves high transaction costs, with large disparities between the prices that a gold dealer will charge you to buy gold and what that same dealer will offer you if you want to sell gold. To facilitate trade, gold exchange-traded funds allow investors to buy and sell shares that correspond to a certain amount of gold. The ETFs are responsible for obtaining and storing the appropriate amount of gold to back the fund's shares, and for that service, gold ETF investors pay a management fee annually. That fee is typically much smaller than the bid-ask spread a coin dealer would charge.

In addition, many gold investors prefer to buy stocks of companies that mine gold. Gold stocks tend to move up and down with the price of gold bullion, but they can also grow independently of gold prices in the event of a major discovery or a smart acquisition of potentially lucrative mining assets. You can find various companies focusing on different gold-producing areas around the world, with substantial numbers of companies in South Africa, Australia, Canada, and other resource-rich nations.

Finally, some companies don't themselves mine gold but instead offer financing to gold miners in exchange for the right to purchase gold production at discounted prices. These gold-streaming companies offer leveraged exposure to gold prices, but they also rely on their counter-parties to deliver the expected amount of gold production. Like miners, gold-streaming stocks carry operational risk as well as gold-price risk.

Why invest in gold?

Whether to invest in gold is one of the most debated topics in investing. Warren Buffett once said that he'd much rather own crop-producing farmland and income-producing stocks than gold bullion, seeing gold as purely unproductive. Yet proponents note that gold often rises in value at times when other investments are losing value, as gold has a safe-haven function in times of crisis that can provide a negative correlation for investment portfolios and thereby help reduce losses when stocks and bonds lose value. Moreover, gold-mining stocks can turn a profit even when gold prices are stable, as they actually are productive enterprises to the extent that they can sell their gold production at prices that exceed the cost of mining the metal.

Investing in gold can be much different from stocks, bonds, and other securities, as the dynamics of the commodity's supply and demand introduce unpredictable elements. Yet many see holding at least a small amount of gold as a good hedge against potential financial catastrophes, and some believe that ill-advised monetary policy makes gold the only reliable measure of wealth in the long run.