Chinese game publisher Perfect World (NASDAQ: PWRD) just announced that it will launch Neverwinter, an MMO from California-based developer Cryptic Studios, for Microsoft's (NASDAQ:MSFT) Xbox One in China. The game takes place in the Dungeons & Dragons Universe, but it is a stand-alone game separate from Bioware and Obsidian's Neverwinter Nights series.

Neverwinter was previously released in June 2013 as a free-to-play game for Windows. The new Xbox One version will require an Xbox Live Gold subscription -- which either costs $10 per month or $60 per year -- for online play. Perfect World will initially launch Neverwinter in China, followed by North America and Europe in the first half of 2015.

That makes Neverwinter an exclusive launch title for the Xbox One, which will officially arrive on Sept. 23 for 3,699 RMB ($600) without the Kinect and 4,299 RMB ($700) with the Kinect. However, recent partnerships with China Telecom and JD.com could significantly reduce the final price through subsidies and discounts.

While Neverwinter lacks the triple-A muscle of Electronic Arts' Titanfall or Activision Blizzard's Destiny, I believe it could become the Xbox One's killer app in China for several reasons.

A smart launch title for a massive market
Microsoft clearly did its homework by tapping Perfect World to port Neverwinter to Chinese gamers.

Due to a recently lifted 14-year ban on gaming consoles, the vast majority of Chinese gamers -- who didn't purchase imported consoles off gray markets -- are PC gamers. The online gaming market in China was worth $13.5 billion in 2013, and is forecast to grow to $16.1 billion by the end of this year.

Converting these gamers to the Xbox One won't be an easy task. When we take a look at the top five PC games in China in May 2014, we see how different the Chinese gaming market is from the North American and Japanese ones:

Although Chinese gamers love League of Legends as much as American ones, we can see how dominant Chinese and South Korean publishers are in the Chinese PC gaming industry. In fact, only one game in the top 10 -- Activision Blizzard's World of Warcraft, at number six -- comes from a Western publisher.

If Microsoft approaches this market as it did in North America -- with a handful of exclusive games and cross-platform titles like Activision's Call of Duty: Ghosts -- the Xbox One could die a quick death, considering its unsubsidized price of $600 is enough to buy a mid-tier gaming PC. Therefore, Microsoft needs a PC-like title, like Neverwinter, to wean gamers off their PCs and onto the Xbox One.

Perfect World is a perfect partner for Microsoft
Microsoft will have an easier time expanding into China than Japan for a simple reason -- the three generations of the Xbox were firmly built on PC gaming. China is dominated by PC games, while PC gaming is considered a niche pastime in Japan. All Microsoft needs to do in China is introduce a game that bridges the gap between the two.

Therefore, a free-to-play MMO like Neverwinter would be the ideal candidate to lure gamers away from their PCs. Letting Perfect World localize Neverwinter for Chinese gamers and properly port the game to the Xbox One would be a smart move, considering that the publisher has been a major player in Chinese gaming since 2004. 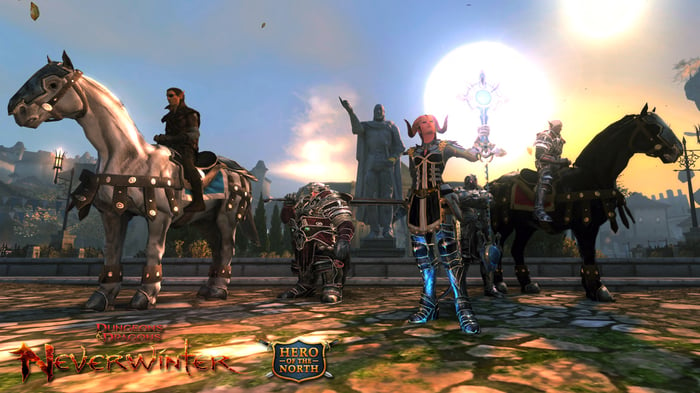 Although Perfect World is an underdog, its longevity and revenue growth indicate that it knows how to survive in the highly competitive Chinese gaming market. It knows how to maneuver the complicated world of gaming credits and companion mobile apps, which increases the chances of Neverwinter gaining a foothold as one of the first console-based MMOs in the country.

The road ahead
Neverwinter isn't Perfect World's only upcoming game for the Xbox One. The company also plans to launch two other games, Celestial Sword and Project X, for the console. Perfect World isn't the only company making exclusive Chinese games for the Xbox One. Local publishers Gamebar and Yingpei are also reportedly working on unannounced titles, and Microsoft will launch a new Kinect fitness game, Tai Chi, as an exclusive game for Chinese gamers.

Considering that China has approximately 400 million gamers online, Microsoft only needs to convince a sliver of those gamers to pick up an Xbox One to gain global market share against Sony's PlayStation 4 and Nintendo's Wii U. So what do you think, fellow gamers and investors -- will Neverwinter be the killer app that convinces them to hop aboard?

Will ‘Neverwinter’ Be the Xbox One’s Killer App in China? @themotleyfool #stocks $MSFT Next Article
Current