When Apple (NASDAQ:AAPL) introduced the iPad in 2010, Intel (NASDAQ:INTC) -- the famed supplier of chips into the massive PC market -- didn't seem to take the tablet threat seriously. At the time, Intel was delivering record results quarter after quarter, sales were rocketing higher, and margins couldn't be better. The PC market was thriving, and the server market -- which Intel dominates -- was booming.

However, after another blockbuster revenue year in 2011, Intel began to see significant difficulties in its PC chip business as 2012 progressed -- guiding earnings estimates down multiple times, with an earnings warning during the third quarter sending the shares right into the penalty box for the remainder of the year.

Intel, bluntly speaking, didn't expect that the tablet market would eat into PC sales as it did. Even its "bear case" scenario that the company outlined at its 2011 analyst day turned out to be too optimistic. Furthermore, once the chip giant understood the situation, it initially tried to fight the trend by making PCs more "tablet-like" rather than directly participating in the tablet craze. 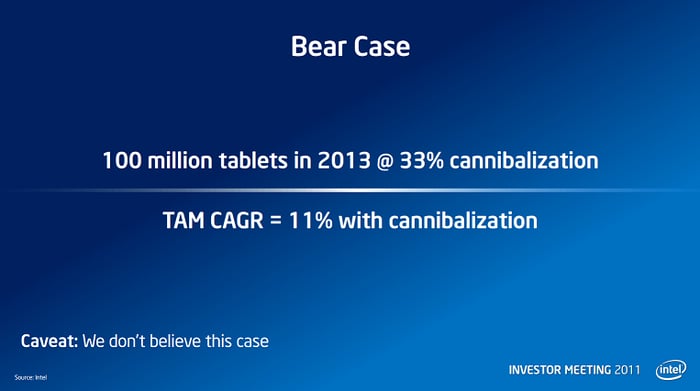 That all changed when Intel's new CEO, Brian Krzanich, took the helm in May 2013.

40 million tablets in 2014 is just the beginning
At Intel's 2013 investor meeting, Krzanich and Intel Mobile and Communications Group general manager Hermann Eul made it clear the company would be gunning to take a significant chunk of the tablet market during 2014. How much of that market? Forty million units' worth.

To put that into perspective, market research firm Gartner said 206.8 million tablet units were shipped during 2013. For 2014, Gartner expects tablet shipments will grow to 256.3 million units. Assuming this number is accurate, Intel's 40 million tablet goal would represent approximately 15.6% of the entire market. That's not PC-like dominance, but certainly a respectable start.

For example, many of the tablets rolling out this year are likely based on platforms from competitors -- think MediaTek, NVIDIA, and Qualcomm -- but because Intel was willing to offer the engineering required to actually move these designs to its own chips, it incurred some expenses.

Additionally, Intel's platforms were more expensive than those from competing vendors. This doesn't necessarily refer to the cost of the actual chips, but instead the platform that surrounds the chip. Though Intel has been doing hard engineering work to bring these costs down, they're still not at the level of its competitors' products. So, in order to make these designs financially viable for the customer, Intel is paying the platform-level difference as a "rebate" or "contra-revenue."

In a sense Intel is paying for these designs, but at the same time, these heavy subsidies will disappear as the company rolls out products with better cost structures. The bleeding -- if Intel does what it has said it will do -- is a short-term problem.

Better products on the way
Though 15.6% market share is hardly a dominant position in the market, Intel is only likely to accelerate from this point as its competitive positioning goes from "good" to "excellent." Next year, Intel will roll out the Cherry Trail, Broxton, and SoFIA chips. The first two will utilize Intel's state-of-the-art 14-nanometer FinFET technology and should have significant performance and power benefits over its competition in the midrange and high end of the tablet market. 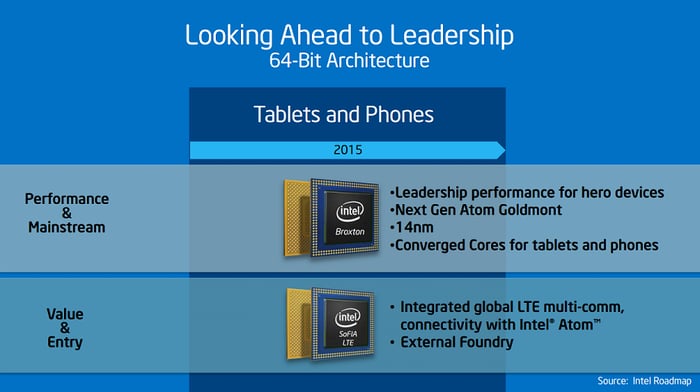 SoFIA, the low-end play, will apparently be built on the same 28-nanometer foundry processes used for its competition in that segment. Intel won't have a clear advantage with SoFIA, but it will have a competitive product that eventually transitions to a leadership position in early 2016 as the company moves this product to its 14-nanometer manufacturing technology (giving it a technology lead).

The tablet business model also favors Intel
The business model also makes the tablet market attractive to Intel. A major issue in the smartphone market for a chip vendor like Intel is that the high end is essentially controlled by a handful of players -- Apple, Samsung, and so on -- which means that no matter how good Intel's chips are, it's still locked out of nearly half of the market.

However, the tablet market is becoming increasingly fragmented and focused on low cost; these are both great things for Intel. Samsung has nowhere near the tight grip on the non-Apple portion of the tablet market that it has on that same part of the smartphone market, and even Apple's vaunted iPad is seeing year-over-year sales declines.

Intel's play is to offer these lesser-known tablet makers silicon that makes their tablets perform as well as or even better than the beasts from Apple and Samsung, but allows for system costs at just a fraction of what the tech giants sell. To put this into perspective, one can buy a $149 Android from ASUS powered by an Intel chip that handily outperforms the silicon found in many of Samsung's higher-priced Galaxy Tab tablets

Intel's value proposition, and thus the value proposition of tablets from Intel's partners, will only grow over time, thus enabling the chipmaker a real shot of "owning" the tablet market in the same sense that it owns the PC market. Given that Intel's product lineup should be in a leadership position by this time next year, the company's rise to tablet dominance could happen over the next two to three years.