It's now been nearly three years since Apple (NASDAQ:AAPL) introduced Siri in the iPhone 4s. While the virtual assistant feature hasn't exactly proven as revolutionary as I may have thought initially, such systems have become an important aspect of the competitive landscape.

Google (NASDAQ:GOOG)(NASDAQ:GOOGL) responded promptly to Apple's move with Google Now, which is considered superior in some ways to Siri. Microsoft (NASDAQ:MSFT) recently released Cortana (better late than never). The software giant is even running an ad comparing Cortana to Siri. Guess which system wins.

These virtual assistants have mostly been confined to the world of mobile devices. Apple added voice dictation to OS X in 2012, but that's merely a transcription service. When will the virtual assistants from the tech heavyweights make it to the Mac?

To the Mac
Google was the first mover on installing virtual assistants on the desktop. Google Now in March of this year was made available on the desktop through Google's popular Chrome browser. Google Now cards show up in the Chrome notification center on Macs and Windows PCs.

Apple has filed for a patent application that details how Siri could finally come to the Mac, as discovered by AppleInsider. 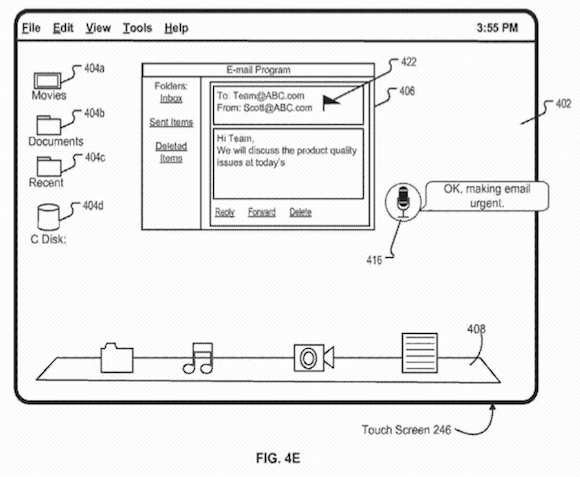 The desktop version could use contextual clues to figure out what the user is asking for. Users can bring up Siri with a specific keyboard or mouse gesture, as well as possibly a voice command. "Hey, Siri" was shown as a new feature at Apple's Worldwide Developers Conference in June, and would resemble Google's own "OK, Google."

What's taking so long?
Why has Apple not yet brought Siri to the Mac? It's worth noting that Siri didn't immediately make its way to the iPad, either. It's possible that Apple waited to build out its North Carolina data center to handle the back-end infrastructure. Siri was added to the iPad with iOS 6.

The patent application also details many new possible features that would be unique to the desktop, such as the ability to drag folders and files onto Siri in order to have the assistant perform certain tasks. Siri could also help with multitasking in what Apple refers to as using it as a "third hand." All of these features aren't applicable to mobile settings and would require extra development effort on Apple's part.

The developer previews of OS X Yosemite, which is due out later this year, don't have any type of Siri functionality built in. That means Apple likely isn't planning on bringing Siri to the Mac this year, if at all. But at least we know it's on the company's iRadar.

Why would it matter?
While voice-powered assistants haven't taken off yet, that doesn't mean they lack revolutionary potential in the long run. Apple's greatest achievements have always focused on interface paradigm shifts. The original Mac's GUI. The iPod click wheel. The iPhone touchscreen.

The "Knowledge Navigator" concept video that Apple created in 1987 (under John Sculley, not Steve Jobs) has yet to come to fruition. As Apple continues to teach Siri new tricks and likely expand its platform support to the desktop, maybe that idea from nearly three decades ago will become a reality in the foreseeable future, leapfrogging Apple ahead of the competition yet again.