Devon Energy's focus has been on growing its oil production, and the company didn't disappoint. Oil production in the U.S. surged 79% over the past year. This focus on high-margin oil has really been felt on Devon's bottom line: The company generated $2 billion in cash flow from operations in the latest quarter, which was up 47% from the year-ago quarter.

Devon Energy's focus on oil has been two-fold. The company has focused its drilling capital on oil-rich wells in the Permian Basin and in the recently acquired play in the Eagle Ford shale. At the same time the company has shed natural gas resources, unloading $2.3 billion in noncore assets across the U.S. to LINN Energy (OTC:LINEQ) in the second quarter. LINN Energy, which is a master limited partnership, has been scooping up low-decline natural gas assets as these provide the stable income the company desires to more easily fund its distribution to unitholders. In the second quarter, LINN Energy also picked up Pioneer Natural Resources' (NYSE:PXD) natural gas assets in the Hugoton Basin for $340 million. Both deals enabled LINN Energy to earn low-risk income from natural gas, while Devon Energy and Pioneer Natural Resources refocused the capital received to invest in higher returning assets that will fuel oil production.

What's fueling growth?
One reason for Devon Energy's oil production surge over the past year was the addition of the Eagle Ford shale to its portfolio. Devon Energy produced an average of 65,000 barrels of oil per day, or BOE/d, last quarter in the Eagle Ford. While that was in line with the company's expectations, production could have been a lot better. Devon suffered from third-party logistics problems as a gathering system experienced some downtime, which constrained takeaway capacity. Without these constraints the company would have produced another 8,000 BOE/d last quarter, which would have padded its earnings results.

Investors should expect the Eagle Ford shale to continue to fuel results in the second half of the year. With its constrained wells now tied into a gathering system, production is averaging well over 73,000 BOE/d, which is 50% higher than the company's output at the end of the first quarter. Looking ahead, Devon expects to average 70,000-80,000 BOE/d in the Eagle Ford shale this year, suggesting production in the second half will be meaningfully higher.

Why it matters
In addition to the Eagle Ford shale, Devon Energy also has meaningful oil-rich positions in the Permian Basin, the Mid-Continent, the Rockies, and the Canadian oil sands. These high-margin oil plays are boosting the company's profits and cash flow. As the following slide points out, the company's margins per barrel of oil equivalent are up 40% in the past year as a direct result of the focus on drilling oil wells. 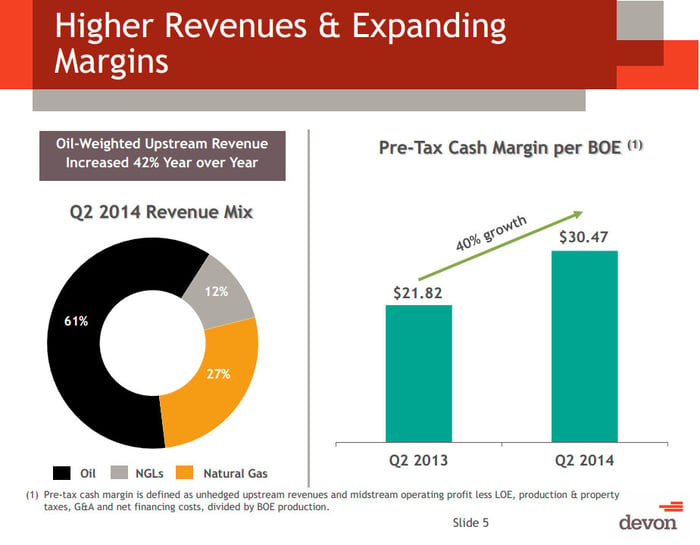 Because of this, investors should expect growth in profits this year and beyond as Devon's oil-focused drilling program continues to deliver results.