"risk ... is what's left over AFTER you think you've thought of everything."

Earlier this week, I wrote this article highlighting three things that could lead to Cameron International's (NYSE:CAM.DL) stock continuing to rise. However, as with any investment, it's worth taking the time to look at potential risks as well. Don't get me wrong -- the long-term trends in oil and gas demand and production, and the expected expansion of production in Cameron's biggest markets, look great, but that doesn't mean the risks should be ignored.

Let's look at the three biggest risks to Cameron's oil and gas services business that could force the stock down.

Cameron's largest market is North America, but a growing exposure to Asia and the Middle East, which accounted for 25% of the company's business in 2013, could be a detriment. Add Africa to the mix, and that's more than one-third of Cameron International's total revenue from last year tied to markets with high levels of potential political and civil unrest. In the company's latest earnings call, CEO Jack Moore highlighted two areas of strength today for Cameron: The Middle East, with demand for onshore rigs -- both newbuild and upgrades -- at high levels, as well as strong orders from what he called the "former Soviet Union" in the company's valves and measurement division. Needless to say, these are potential hotbeds right now, in two ways. Oil and gas production is expanding in both areas, as is civil unrest. Cameron should continue to participate in these markets, but either sanctions or military actions could impact its business in both. OneSubsea, a joint venture with fellow oil-field services company Schlumberger, is one of the bright spots for Cameron's long-term future. While the size and scope of the projects that OneSubsea targets will lead to tremendous opportunities, it could also lead to disappointing results from one quarter to the next. OneSubsea's contribution to the company's backlog grew by $1.1 billion from the end of the first quarter to the second, but there will be periods in which award activity swings the other way, due to the size of these projects.

The fully integrated solution that OneSubsea can offer, largely due to Schlumberger's contribution, should lead to strong returns, but the lumpiness could lead to short-term softness in the stock price.

3. Risk is what you don't see coming

Richards' tweet at the top of this article is important, because it's something people should keep in mind with every investment: Nobody knows all the risks, and it's dangerous to delude ourselves into thinking we've identified everything.

Case in point: The Deepwater Horizon oil rig explosion happened on April 20, 2010. Cameron's stock was actually up 5% from April 19 to April 25, but when word got out that a Cameron blowout preventer had failed and led to the explosion that killed 11 workers on the rig and allowed almost 5 million barrels of crude oil to spill into the Gulf of Mexico. Here's what Cameron stock did over the next two weeks: 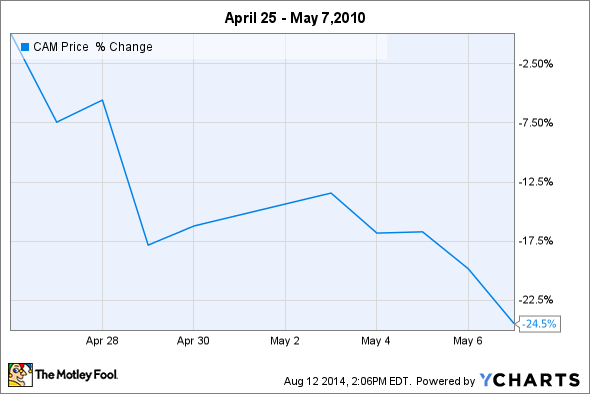 A 25% drop in the share price is nothing against the loss of livelihood to tens of thousands of people, the environmental harm, and the deaths of the 11 workers. I never want to trivialize such matters. However, a completely unforeseen -- unforeseeable -- event cost investors nearly $3 billion in a couple weeks' time. By July, shares would be down 32% and Cameron would face hundreds of potential lawsuits.

In the long run, Cameron would be cleared of all liability, as it was ruled that the failure of the blowout preventer was due to poor maintenance and upkeep on the part of Cameron's customers -- BP and Transocean.  However, it wasn't until April 2013, after hundreds of millions of dollars in legal fees and a settlement with BP, that the courts cleared Cameron of liability.

As I highlighted in the bull case argument, Cameron's long-term opportunities are great, but it must execute for those opportunities to pay off. Furthermore, it can't control everything, and the three risks cited above are all largely out of Cameron's hands. It's these unknowable, uncontrollable complications that we must consider when building a portfolio.

To paraphrase Warren Buffett, diversification is protection against what you can't know. Keep that in mind when deciding how much -- if any -- of Cameron International's risk you are comfortable being exposed to, and invest accordingly.