If you go into your AT&T (NYSE:T) or Verizon (NYSE:VZ) store to buy a new smartphone, odds are the salesperson will direct you toward a Samsung (NASDAQOTH: SSNLF) device. A recent survey by Kantar Worldpanel found that 63% of smartphone buyers were recommended a Samsung. Comparatively, carriers recommended Apple (NASDAQ:AAPL) just 30% of the time.

Nearly any tech review site will tell you that the iPhone is at least on par with any Samsung smartphone. In fact, the iPhone is usually ranked as the best smartphone available. So, why is there such a huge discrepancy between recommendation rates? The answer shouldn't surprise you: It's not in the best interest of wireless providers to recommend an iPhone profit-wise.

Making you pay more for a lower priced phone
Carriers seem to have a love-hate relationship with the iPhone. While the product certainly sells well, it carries a high up-front cost for the carriers because they must pay Apple subsidies to sell the phone for $199. Samsung and every other OEM have the same deal, but Apple's iPhone typically carries the highest subsidy.

Although Samsung's latest flagship Galaxy S starts off retailing for the same price as the latest iPhone -- $650 -- Samsung will often reduce the price after the initial launch, with the last three flagship Galaxy S devices declining 20% to 25% in retail price after six months. Meanwhile, AT&T and Verizon continue to sell customers the phone at the same subsidized price of $199 and pocket the change.

Apple's impact on wireless carriers is quite noticeable. With every new iPhone release, AT&T and Verizon notice significant declines in profit margin as they're forced to pay subsidies up front. 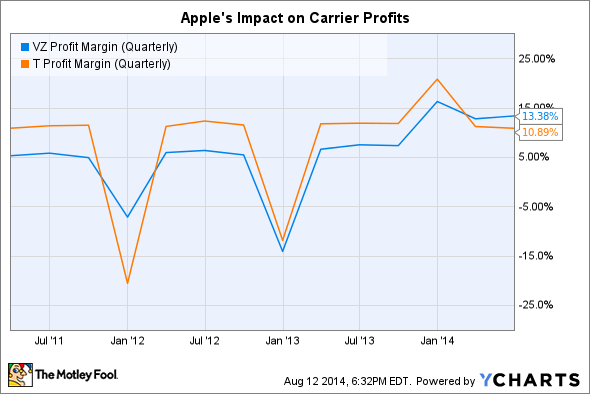 Playing it safe
Other analysts have speculated that U.S. carriers want to avoid a situation where Apple can exercise even more power over them. Apple continued to gain share of the U.S. smartphone market in the second quarter of the year despite Samsung's product refresh in April. The iPhone maker now has a 42.1% share of the market. If Apple gains more market share, it may be able to exercise market power and force carriers to increase subsidies or pay for more advertising, the theory goes.

On the other hand, carriers are walking a fine line pushing Samsung phones considering the company already commands 28.6% of the market. But Samsung's products have a strong customer satisfaction rating and a loyal customer base -- the second best among smartphone OEMs after Apple. Smaller companies like LG and HTC aren't even close. In other words, the Samsung phone probably isn't going to get returned.

The only thing worse for carriers than paying a bigger subsidy is paying two big subsidies, so they want shoppers to be happy with the phone they buy. Selling a Samsung phone allows them to minimize the risk of paying more subsidies while maximizing the sales of high data plans. In the end, it all translates into better expected profit margins than selling nearly any other phone.

Samsung's not-so-secret weapon
Samsung is shelling out billions of dollars to get salespeople at your carrier to recommend and sell you its smartphones. Unlike Apple, Samsung offers spiffs to salespeople for selling its products. A spiff is an immediate bonus paid directly to the salesperson.

Carriers don't have much control over these incentives as they are offered directly by the manufacturer. If one carrier doesn't offer them, it'll have a hard time keeping salespeople. That makes spiffs a big risk to the carriers as it shows how any smartphone maker with a big enough budget (say, Microsoft if it wanted to) could dominate the mind share of their salespeople and undermine their businesses.

Why the sudden change?
Selling a Samsung phone might not be in the customers best interest, but it's certainly in the best interest of carriers and its employees. The amount of money Samsung doles out to salespeople every year is astounding, and shows the power of "promotion."

Perhaps that's another reason why carriers are trying to move away from subsidies altogether. They realize they're not really in control of what smartphones their salespeople try to sell, and as a result profit margins could take a hit if another high-subsidy OEM starts "promoting" heavily.